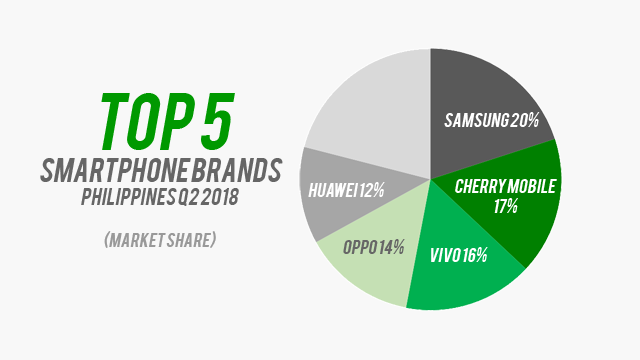 Samsung is the number one smartphone brand in the Philippines for the second quarter of 2018 according to Counterpoint Research.

This is followed by Philippine brand Cherry Mobile in the second position. While Chinese brands Vivo, OPPO and Huawei occupy the third, fourth and fifth spots respectively.

Cherry Mobile is the only local Philippine smartphone brand that made it to the list. The company even gained an additional 3% market share compared to the same period last year resulting in a 17% current market share.

Cherry Mobile is the only local Philippine smartphone brand that made it to the list.

Just like Samsung, Cherry Mobile’s J series of smartphones also made up the majority of its sales. There’s also the company’s signature Flare series that drive up the company’s sales every year.

The company captured 16% market share in the second quarter of 2018. This is more than a 100% increase compared to the same period last year!

OPPO is now hovering around 14% market share. The company has several new models released recently which may further drive up its sales going into the holiday season.

Huawei has the biggest growth among the different smartphone brands operating in the Philippines. The company quadrupled its market share compared to the same period last year!

This is largely because of the Nova series including the Nova 2 Lite. Many Filipinos also opted for the company’s flagship P20 and P20 Pro smartphones over the more expensive offerings from other brands.

The company has the Huawei Y6 2018 for the budget category.