Budget smartphones always seem to sacrifice looks to offer a more affordable price tag. That’s not the case with the Huawei Y6 2018.

Judging by its design alone, the device looks twice as its worth. Let’s see if this is also true in its performance, camera quality and battery life. What makes the Huawei Y6 2018 look great is its FullView display with the trendy 18:9 aspect ratio. This makes the screen take almost the entire front panel while minimizing the bezels. It also provides a more comfortable one hand usage since its taller, not wider.

The phone’s back has a matte finish while the sides are a bit glossy but thankfully, not slippery. It looks like there’s a dual camera setup on its back but that’s just a single camera with an LED flash.

Its audio jack is placed on the top while the microUSB port and speaker grille are at the bottom. The power and volume buttons are on the right side while the SIM card and microSD card slots are on the left.

At 7.8mm and 150 grams, the device is one of the thinnest and lightest in this price range. A phone case would be useful though since it’s not immune to scratches and scrapes. The 5.7-inch FullView display makes the Huawei Y6 2018 stand out among its competitors. Admittedly, I felt that its HD+ resolution (720 x 1440 pixels) is a bit of a downgrade but that’s mainly because I was reviewing the Huawei P20 before this device.

Thankfully, the screen has decent color accuracy and responsiveness with support for up to 10 simultaneous touch points. A screen protector is also pre applied out of the box.

Perhaps the main disadvantage of this screen is its brightness. It’s alright when under normal lighting situations but looks  a bit washed out when directly under the noontime sun. It performs smoothly out of the box and the EMUI user interface has fluid animations. However, letting several apps run on the background easily chokes the device. Recent apps should be cleared or the device can be optimized using its native Phone Manager app to experience its best performance.

I’ve already made a gaming tests video of the Huawei Y6 2018 and it shows that the device can run games like Asphalt 8: Airborne and MARVEL Future Fight smoothly in medium graphics quality but frame drops are noticeable in high graphics quality.

Meanwhile, more resource intensive games including RULES OF SURVIVAL, PUBG Mobile and NBA 2K18 can only run in the lowest graphics quality. Increasing the graphics to medium makes these games unplayable.

The Huawei Y6 2018 can produce surprisingly good pictures using its 13 Megapixel rear camera on a bright sunny day. Colors are pretty accurate, subjects are sharp and dynamic range is acceptable.

Take a look at the following sample pictures (click to open original resolution):

However, the device starts to have a hard time when darkness sets in. It’s understandable since it only has an f/2.2 aperture. Nevertheless, pictures taken at night can still look good if the LED flash is enabled.

Likewise, the 5 Megapixel front camera can also capture pleasing selfies under decent lighting. I took the following selfies inside a mall and they look decent despite my lack of sleep. Low light selfies can be frustrating though. Pictures appear grainy even if the front LED flash is used. If the room is well-lit at night, selfies are acceptable. Otherwise, it’s best to just take selfies during the day.

The Huawei Y6 2018 has a triple card slot – two for the SIM cards and one for the microSD card. The latter is important since the device only has 16GB of built-in storage.

It can connect to 4G LTE networks and its mobile internet speed is decent when the telcos are having no issues. I’ve often used it as a Wi-Fi hotspot for my other devices without problems. Only the right speaker grille has audio output.

A basic set of earphones comes free with every box of the Huawei Y6 2018. Since my review unit did not have one, I just used the earphones from another Huawei smartphone. This enabled the audio enhancements including a bass boost feature.

Music listening through the phone’s loudspeaker can be satisfying for acoustic or vocal-heavy tracks. It only has a tiny hint of bass and slight distortions start to appear when the volume is too high. It can get pretty loud though so thumbs up for that.

Since it’s just a budget smartphone, the Huawei Y6 2018 only comes with the basic sensors. This includes an accelerometer, ambient light sensor and proximity sensor. Hence, Augmented Reality apps and games like ARuler and Pokemon Go won’t be as useful.

On the positive side, it uses Face Recognition for unlocking in addition to the usual PIN, password and pattern. I tried using a photo of my face to unlock but it wasn’t fooled.

However, it’s only fast and accurate in well-lit situations. It fails to recognize my face in low light and even when I’m against the light source. The Huawei Y6 2018 is equipped with a non-removable 3000mAh battery. Just like other Huawei smartphones, it has no problem surviving an entire day on a single charge with casual usage.

It scored 7 hours and 55 minutes on PCMark battery test 2.0 with the screen brightness set to around 50% and airplane mode turned on.

Charging the phone requires a little more than two and a half hours to go from 0 to 100% battery capacity. This is using its original charger with a rated output of 5V/1A. The Huawei Y6 2018 smartphone and its simple box.

The Huawei Y6 2018 doesn’t just look great, it also has a good set of cameras for its price as well as the usual great battery life of Huawei smartphones. I recommend it for those who are looking for a pretty phone on a budget.

Just remember that it won’t perform great on some of the popular games that also happen to be resource intensive. Just stick to arcade and racing games. 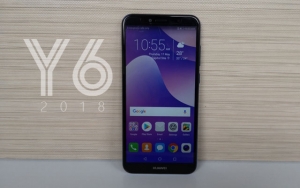 The Huawei Y6 2018 doesn’t just look great, it also has a good set of cameras for its price as well as the usual great battery life of Huawei smartphones.