Review Summary: The OPPO F9 is a stunning smartphone with decent gaming performance, unsurprisingly good cameras and an outstanding battery.

I was a bit surprised when OPPO released the OPPO F9 smartphone after only 5 months since its predecessor, the OPPO F7.

The most probable reason is the intense competition among mid-range smartphones in the Philippines. The company had to offer better features to win hard to please Filipinos.

The result is the OPPO F9 with a tiny notch on its edge-to-edge display, a whopping 6GB of RAM, dual cameras and the VOOC Flash Charge technology that promises 2 hours of talk time after merely 5 minutes of charging! 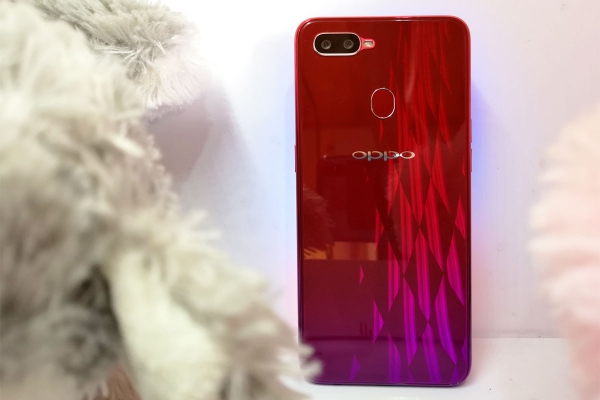 This is the gradient body design of the OPPO F9.

The first thing that caught my attention upon unboxing the OPPO F9 is its gradient color. I had the sunrise red color variant with a gradient of red to purple. Add to the mix the patterns that appear when the device is tilted and it’s nothing short of stunning.

Flip the phone over and you’ll be greeted by its waterdrop display. The small notch certainly provides more room for the notification icons. Factor in the small bezels and the OPPO F9 posts a screen to body ratio of 90.8%.

There were several instances though that I accidentally touched the top edge of the display. This is especially true when I turn on its hotspot function and the status bar turns blue.

Meanwhile, the screen itself is bright with accurate colors. It’s responsive to touches and can identify up to 10 multi-touch inputs at the same time.

A scratch-resistant glass protects the front panel of the OPPO F9. There’s a pre-installed screen protector on the device but I removed it to get a better perception of the screen’s responsiveness.

However, the glass body makes the device a smudge and fingerprint magnet. A phone case helps but at the expense of hiding its attention-grabbing Gradient Body Design. 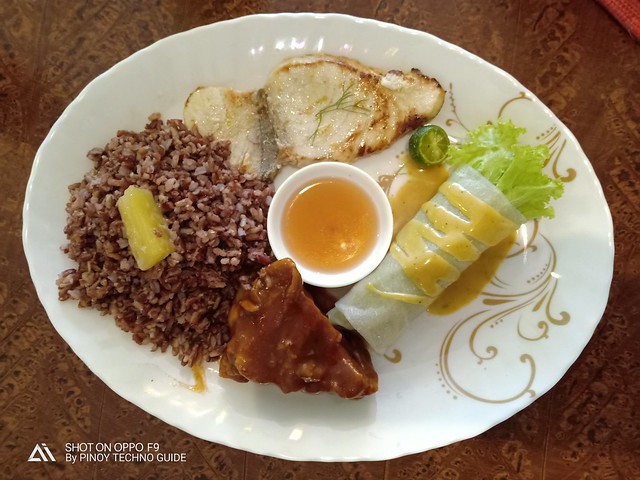 Other mid-range smartphones from fellow Chinese brands and even local Philippine brands already have dual and quad cameras. Hence, OPPO answers by fitting the OPPO F9 with a dual rear camera system.

This is composed of a 16 Megapixel main rear camera and a 2 Megapixel secondary rear camera. The latter is used as a depth sensor providing the blurry background in Portrait mode that simulates the shallow depth of field of photos taken with a DSLR camera.

The resulting photos are surprisingly good. The OPPO F9 can effectively identify the subject and keep it sharp while turning the background blurry with realistic bokeh. There are also several lighting options including Film, Monotone, Rim Light, and Bi-color that add artistic effect to the portrait.

Aside from the Portrait Mode, the OPPO F9 also has a Photo, Video, Slo-mo, Time-lapse, Sticker, Panorama and Expert modes. 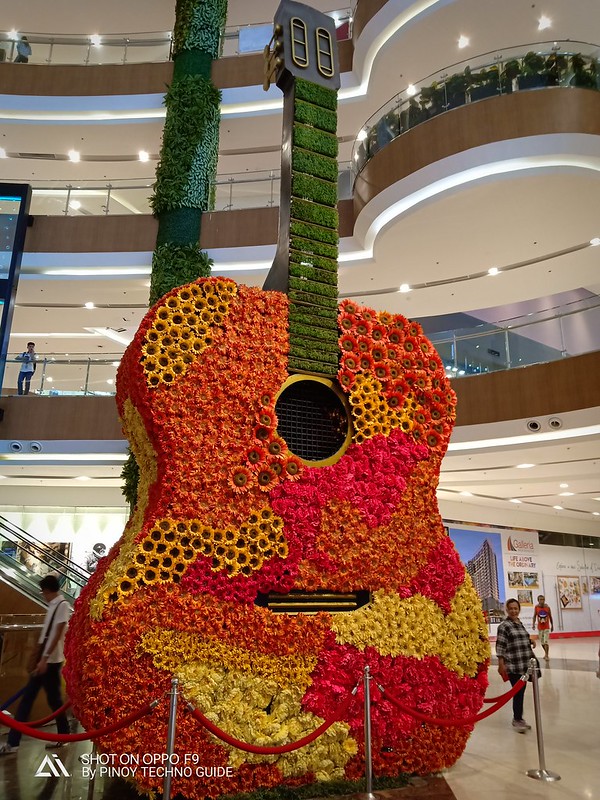 In Photo mode, I set the HDR to Auto and turn on the Super Vivid feature when needed. Pictures have sharp details, accurate colors and wide dynamic range. Landscapes and colorful scenes can benefit with Super Vivid because it makes colors pop and turns the image livelier.

Video recording tops at FHD or 1080p resolution in standard 16:9 aspect ratio. It has a software-based video stabilization that removes camera shakiness and it works surprisingly well. However, it’s focus is easily distracted by any moving object.

The Sticker and Slo-mo modes can be a source of fun with friends. The former tracks faces in the camera’s viewfinder with cute AR stickers while slow-motion videos have 720p resolution and 90 frames per second.

There’s no dedicated Night mode but photos shot at night are decent.

The F series of OPPO smartphones have always been about selfies with the tagline ‘Selfie Expert’. Hence, the OPPO F9 is equipped with a 25 Megapixel front camera!

Selfies that are shot using the OPPO F9 look sharp and bright. When the AI Beautification feature is turned on, the phone’s software removes blemishes and make faces look fairer.

I found it the most realistic when the beautification level is set to 1. Otherwise, it can look overly airbrushed and unrealistic.

In terms of video, the phone’s front camera can shoot up to 1080p but lacks the stabilization of the rear camera.

Overall, the OPPO F9 has great cameras both on the front and at the back. I like the sharp photos, smooth videos, and fun modes.

Gaming Performance of the OPPO F9

The OPPO F9 is powered by a MediaTek Helio P60 chipset with a 2.0GHz octa-core CPU, Mali-G72 GPU and 6GB of RAM. This allows the device to achieve the following benchmark scores:

Mobile Legends: Bang Bang runs on the OPPO F9 smoothly even when the graphics quality is set to high and additional features like character frame and fog effect are turned on. RULES OF SURVIVAL also runs smoothly at Excellent graphics quality although turning High FPS mode makes it a bit laggy especially during action-packed encounters.

When playing games, the OPPO F9 automatically engages the OPPO Game Space feature. It clears the phone’s memory and prevents notifications from distracting the user.

Another great feature of the OPPO F9 for gamers is the floating sidebar that can be opened by swiping from the left side of the screen. It opens apps in a floating window on top of the game so that the user can reply to an SMS or chat mid-game.

The OPPO F9 is a decent gaming smartphone. It can run most resource intensive games in medium to high graphics quality and it has several features that make games more enjoyable to play. 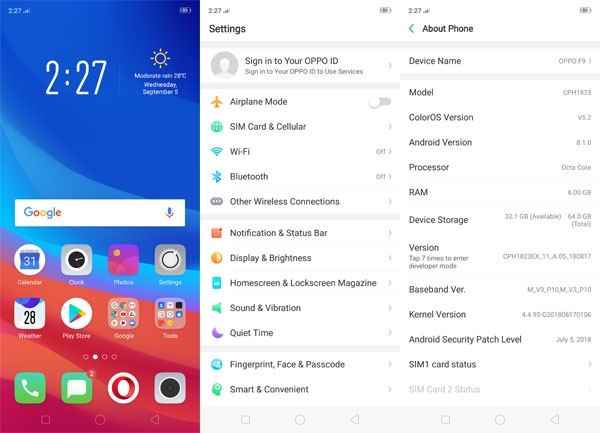 The OPPO F9 comes with Android 8.1 Oreo out of the box. However, it also has the company’s ColorOS 5.2 skin which incorporates a lot of customizations.

It has no app drawer and puts all app icons directly on several home screens. Thankfully, the quick settings are accessible by swiping from the top instead of the iOS-like placement on the bottom in the previous version of the software. 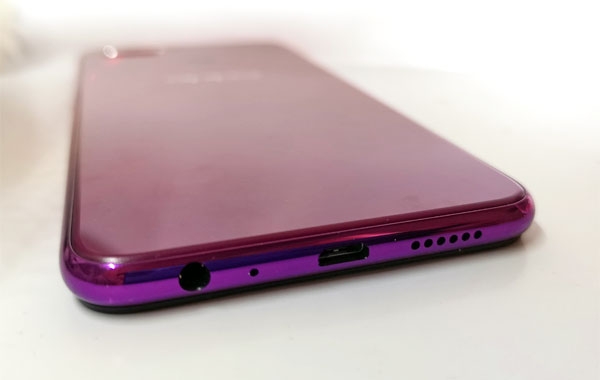 Loudspeaker sound quality is one of OPPO F9’s weaknesses.

The OPPO F9 has Real HD Sound technology developed by Dirac. It only works when earphones are plugged in and make the resulting audio livelier and fuller. Its free earphones are just the basic type though with unremarkable quality.

On the other hand, I’m a bit disappointed by the phone’s loudspeaker. I know smartphone speakers are terrible especially when listening to music but the OPPO F9 already crackles at around 80% volume and has almost non-existent bass.

As usual, the OPPO F9 is a dual SIM smartphone with 4G LTE connectivity. It also has dual-band Wi-Fi, Bluetooth 4.2 and GPS positioning. It provides decent internet connection speed when connected to a 4G network and standard speeds on Wi-Fi.

One of the main issues with the OPPO F9 in terms of connectivity is its use of a micro-USB port instead of the modern USB Type-C. I agree that the reversible connector is more convenient but if this is what it takes for the phone to have fast charging capability, then I’m willing to stick with the older connection.

In terms of security, the OPPO F9 has two biometric unlocking methods – fingerprint and face recognition. Both methods unlock the phone quickly and there’s an option to use the phone’s screen for face unlock in low light situations. 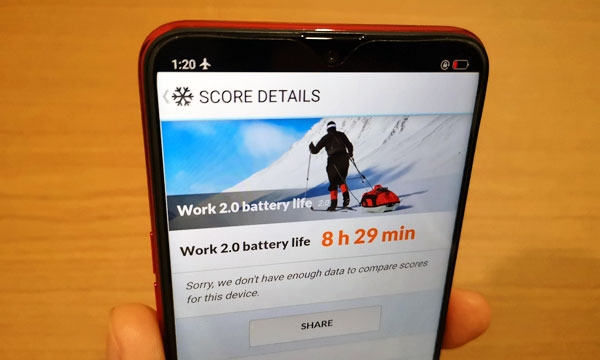 OPPO heavily marketed the OPPO F9 using the tagline ‘5-minute charge, two-hour talk’. Of course, I tested this claim by charging the OPPO F9 for 5 minutes and then making a call.

The device got 9% of battery after 5 minutes of charging using the original charger. Then, I was able to make three consecutive calls for a total of 2 hours and 8 minutes! That’s more than the promised 2-hour talk time.

I was able to make three continuous calls for a total of 2 hours and 8 minutes.

Furthermore, the VOOC Flash Charge feature of the OPPO F9 is another great feature that actually works. It re-charges the device from 0 to 100% battery life in 1 hour and 15 minutes!

Likewise, the OPPO F9’s 3500 mAh battery is long lasting. It usually lasts more than a whole day of casual usage and around 6 hours of continuous gaming. The device scored 8 hours and 29 minutes on the PCMark battery life test. This is with airplane mode turned on and the screen’s brightness set at 50%.

The official price of the OPPO F9 in the Philippines is PHP 17,990.00. That might be too much if we base our purchase decision on the specs sheet alone.

However, the OPPO F9 offers more than just specs. It also has a stunning design, impressive fast charging technology, and additional software features that improve photography and gaming experience.

Still, a good alternative to the OPPO F9 is its predecessor the OPPO F7 which is now available at a lower price tag. On the other hand, the main competitors of the OPPO F9 are the Huawei Nova 3i and Samsung Galaxy J8. 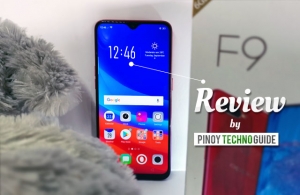 The OPPO F9 is a stunning smartphone with decent gaming performance, unsurprisingly good cameras and an outstanding battery.