BY Daniel Gubalane ON Oct 04, 2019 with 110 Shares
Playing Mobile Legends on the Realme 5 smartphone.

I tested the gaming performance of the Realme 5 smartphone using GameBench Pro. While playing Mobile Legends, NBA 2K20, and Rules of Survival, this app measured its average framerate in fps and battery temperature in °C.

The Realme 5 is powered by a Qualcomm Snapdragon 665 chipset with a 2.0GHz octa-core CPU, Adreno 610 graphics processor, and either 3GB or 4GB of RAM. My review unit is the 4GB RAM + 128GB storage version of the device. 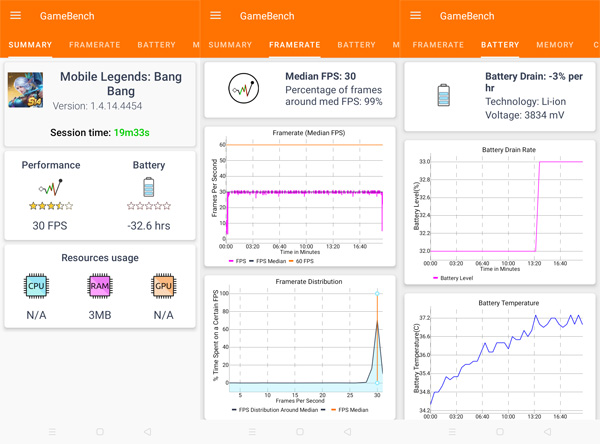 I tried to max out all the graphics settings of Mobile Legends: Bang Bang for this Realme 5 gaming review. However, I can’t find the option to enable HFR or High Framerate mode in the settings.

As a result, the highest possible framerate is 30 fps only instead of the much, much smoother 60 fps. Nevertheless, the Realme 5 scored an average framerate of exactly 30 fps after a 19-minute Rank match. I think it can still achieve a higher framerate if the game allows it.

GameBench also measured a peak battery temperature of less than 38°C during the game. 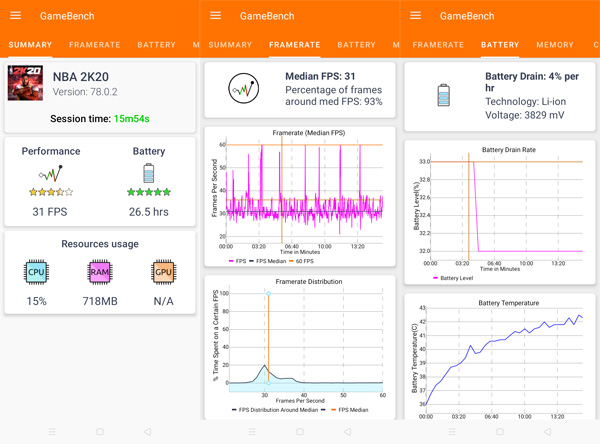 Gamin test results for NBA 2K20 on the Realme 5.

Just like in my previous gaming tests, I set the video settings of NBA 2K20 to either high or very high except for the depth of field effect which I turned off.

The resulting average framerate during more than 15 minutes of playing the game is 31 fps. It’s not very consistent though as the framerate can suddenly jump to more than 50 fps then back to the 30s level.

The phone’s battery temperature peaked at around 42.5°C while the test was running. 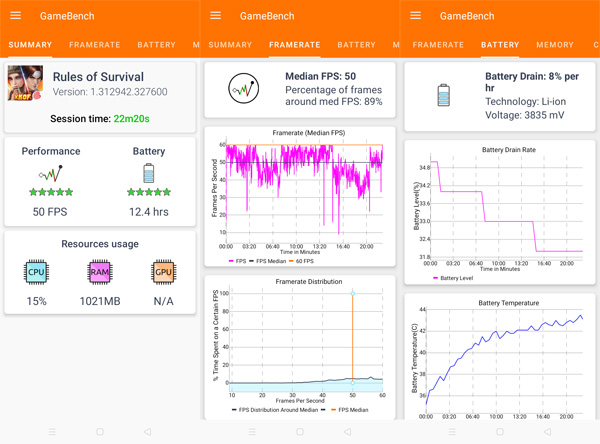 Gaming test results of Rules of Survival on the Realme 5.

For the last game in this test, I played Rules of Survival with the graphics quality set to Excellent which is the maximum option.

I played for more than 22 minutes and got an average framerate of 50 fps. That’s just a few frames per second below the Realme 5 Pro’s 52-54 fps. The game can still feel sluggish though especially during busy scenes so I recommend stepping down the graphics quality to High.

The phone felt a bit warm during the game and the battery temperature measurement of GameBench confirmed this with a peak of around 43°C.

Here are the results of the Realme 5 gaming tests. It includes the average framerate and peak battery temperatures. 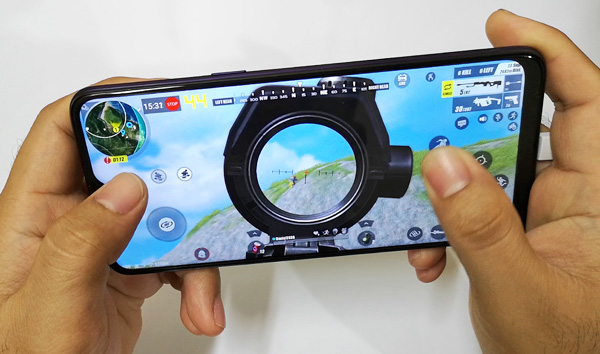 Playing Rules of Survival on the Realme 5 smartphone.

The Qualcomm Snapdragon 665 chipset of the Realme 5 gives it an impressive gaming performance for its price range.

The amount of RAM might affect these results since the most affordable version only has 3GB of RAM instead of 4GB. However, you can easily keep the same performance by clearing the recent apps before playing a game.

It reached 43°C in battery temperature but what’s important is that this did not become uncomfortable. The phone’s back cover material must be an effective insulator. Furthermore, this did not affect the phone’s gaming performance as the framerate graphs show.

UP NEXT: Realme 5 Full Review!