I’ve spent a couple of weeks using the 4GB RAM + 128GB variant of the phone for this full review. During this time, it was subjected to several tests for gaming performance, camera quality, battery life, and my personal preferences when it comes to smartphone design and features. 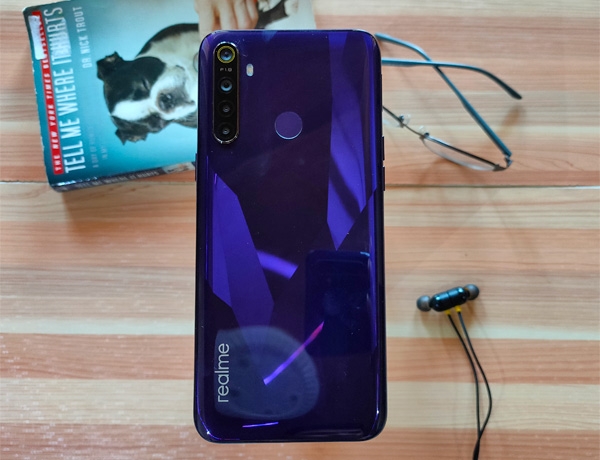 The back of the Realme 5 with “crystal design”.

The Realme 5 is a budget-friendly smartphone that looks like other more premium smartphones at more than twice its price!

Yes, it has a plastic body but the addition of a crystal pattern at the back and quad camera module make it look more expensive. The back emulates the facets of crystals that reflect light at different intensities.

The phone is a bit thick though at 9.3mm and smudges easily accumulate on the glossy back cover. There’s a free phone case inside the package but it’s slightly thicker than usual and makes the already large phone quite bulky. 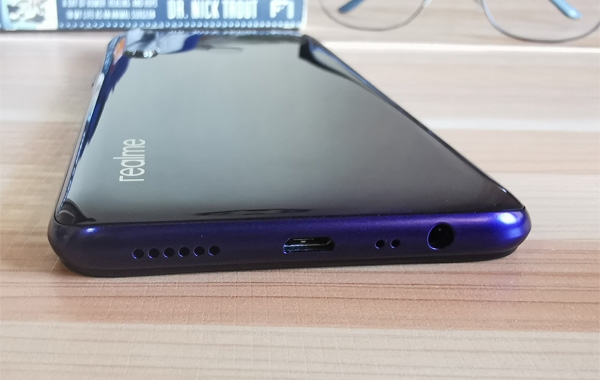 The micro-USB port is a minor inconvenience.

Its power button is on the right side with the volume buttons and SIM card tray on the left side. The bottom has the loudspeaker, 3.5mm audio jack, and an outdated micro-USB port.

On the front of the phone is a large display. It has a 6.5-inch HD+ IPS screen with a small notch at the top center portion which houses the selfie camera. 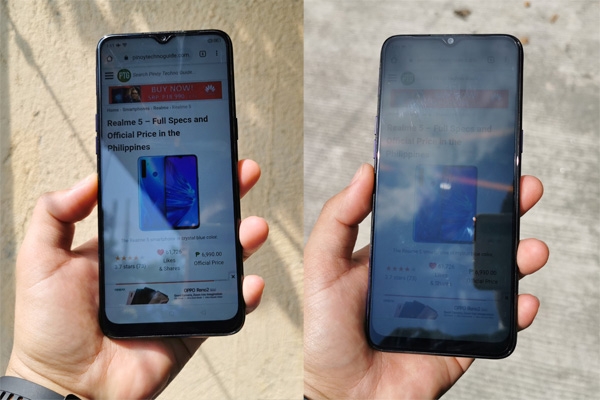 This is how the Realme 5’s screen looks like at maximum brightness in a shaded area (left) and under direct sunlight (right) at around 1pm.

Screen legibility indoors is good although it tends to get washed out under bright sunlight. On the positive side, the touchscreen is very responsive and supports up to 10 multi-touch inputs.

Overall, the Realme 5 is a decent smartphone to flaunt around. Having a USB Type-C port would have been nice as well as a slightly brighter screen. 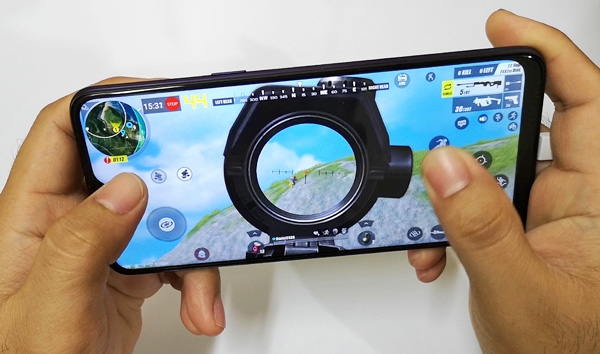 Playing Rules of Survival on the Realme 5 smartphone.

There’s no doubt that many people will get the Realme 5 smartphone for its gaming performance. It has a Qualcomm Snapdragon 665 chipset and up to 4GB RAM!

I tested the phone’s gaming performance using three of the most popular mobile games in the country – Mobile Legends, NBA 2K20, and Rules of Survival. I used GameBench Pro to measure the average framerate and temperature while the games were running.

Here are the results:

Take note that Mobile Legends does not have the HFR mode available for this device. The other games allow the user to max out the graphics settings and I do that for all my gaming tests.

These are impressive results for the Realme 5’s price range. Most budget-friendly smartphones run games below 30 fps. Also, the phone did not feel uncomfortably warm despite the 43°C temperature measurement after the last game. 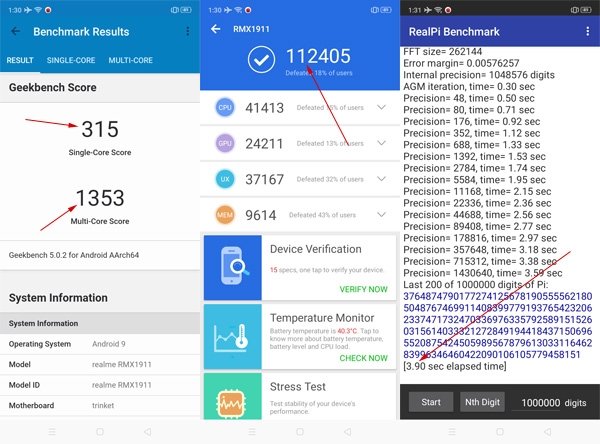 There are several frame drops when playing games at the highest graphics quality so I recommend turning it down to medium or even low for some resource-intensive games.

Be sure to clear your recent apps too when switching to another game to get the best performance. 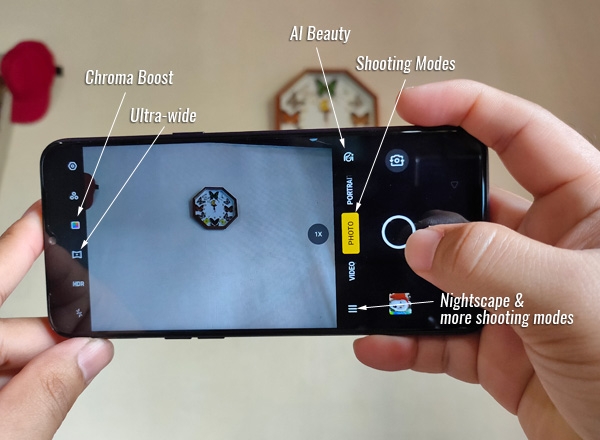 When it comes to photography, the Realme 5 has a quad-camera setup composed of a 12MP main camera, 8MP ultra-wide camera, 2MP macro camera, and 2MP depth camera.

Pictures produced by the 12MP main camera look decent with surprisingly good dynamic range but colors are a bit washed out. This can be fixed by enabling the Chroma Boost feature which increases the color saturation and slightly sharpens the image. 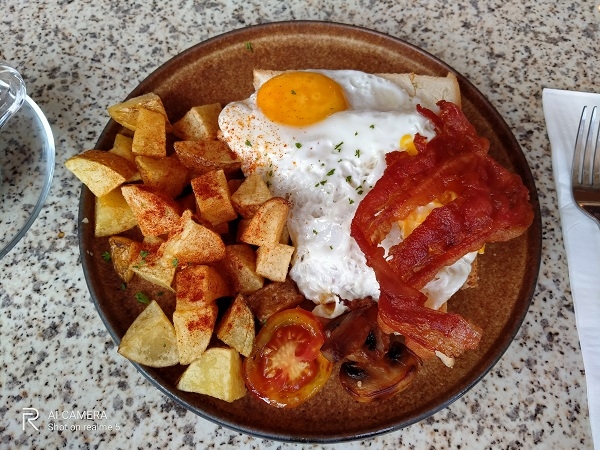 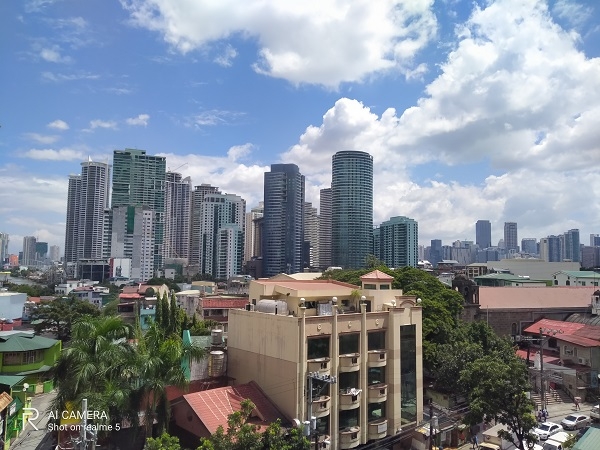 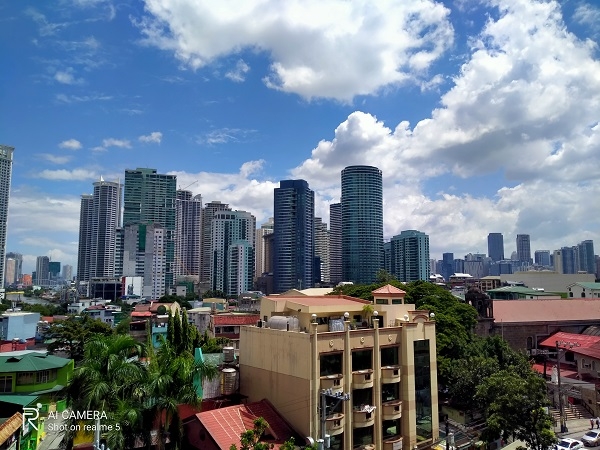 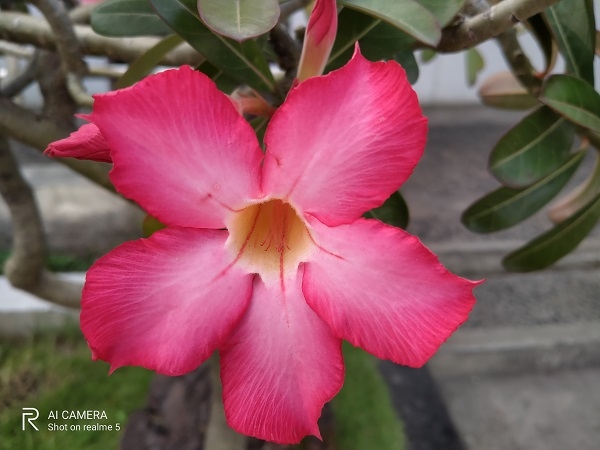 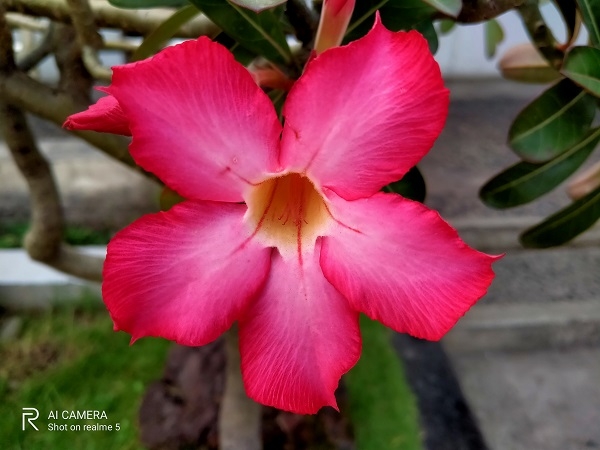 Chroma Boost is essential when taking pictures of food, gardens, flowers, and other colorful subjects. I like to keep it turned on since the resulting pictures look better despite being slightly oversaturated.

Meanwhile, the ultra-wide camera captures a wider scene than the main camera but with noticeably lesser quality. My suggestion is to use it for landscapes only with the Chroma Boost feature also turned on. 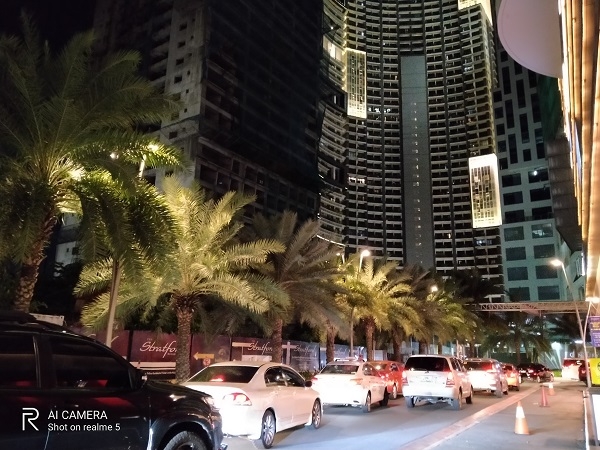 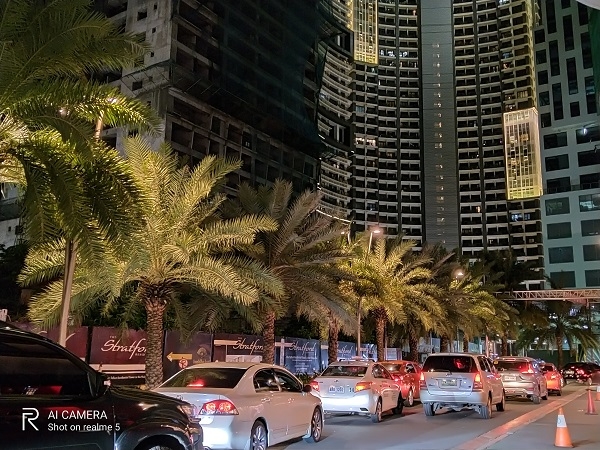 Realme 5’s camera has a hard time when shooting in poorly-lit rooms and outdoors at night. Its low light shots tend to look smudgy and grainy. Thankfully, the phone’s Nightscape mode solves this.

Nightscape requires a few seconds of holding the phone still while it shoots and stacks multiple exposure pictures. The results are bright low-light pictures with well-defined details and vibrant colors.

For videos, the Realme 5 can shoot up to 4K resolution! Very few budget-friendly smartphones can do that. The resulting videos also look decent and the autofocus seems stable. It can easily become grainy though so make sure there’s plenty of light when shooting videos. 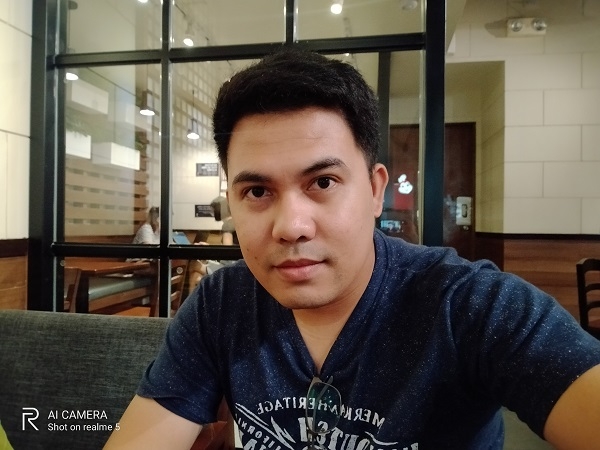 Now let’s talk about the 13MP selfie camera. Selfies from this camera look bright and sharp as long as you hold it in the correct distance from your face – not too close nor too far. Your arm should still be bent while taking a selfie.

However, I had to turn off the AI Beauty feature since it tends to make my cheeks pinkish. Keeping it set to Natural results in better-looking selfies with just a tiny amount of smoothening. 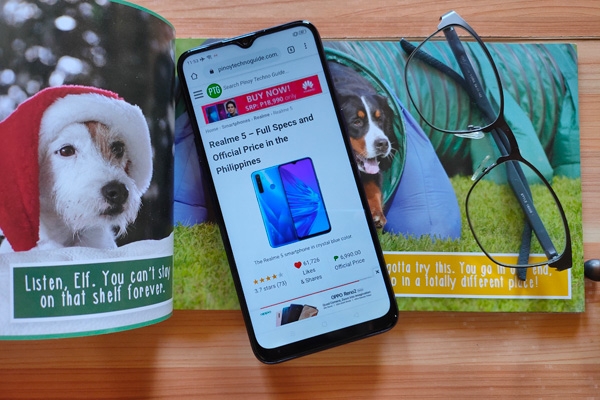 The Realme 5 has dual SIM card slots with 4G LTE connectivity. Using mobile data for internet connectivity is fast as long as there’s a good signal in the area.

It also has support for dual-band Wi-Fi networks. This means that it can take advantage of 5GHz Wi-Fi in newer routers.

For audio quality, the phone’s loudspeaker remains clear even when the volume is maxed out. However, it doesn’t get very loud and just like other smartphone speakers, lacks bass.

There are no free earphones inside the package so I just used the Realme Buds to get a gist of the phone’s audio quality when using earphones.

It has a sound-enhancing effect turned on by default called Real Power Sound which was co-developed with Dirac. However, turning it off made the audio output sound better for my ears.

The phone also supports Face Unlock using the front camera and it works well even in dim environments.

Sensor Box for Android detects several sensors on the Realme 5 including a gyroscope which is necessary for AR and VR apps and games. 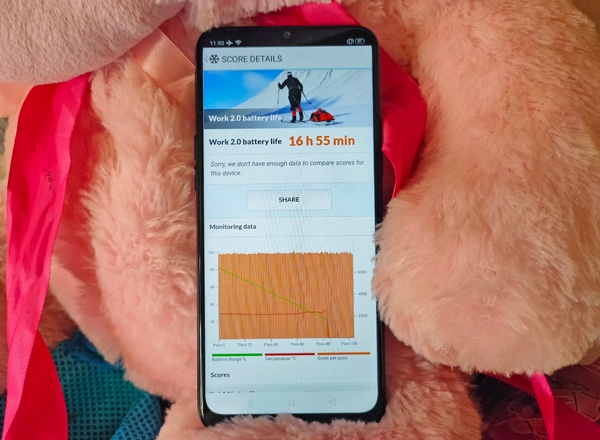 A massive 5,000mAh non-removable Li-Po battery powers the Realme 5. It can last two days on a single charge with casual usage!

It scored 16 hours and 55 minutes on the PCMark Battery Life Test 2.0. That’s the highest result I’ve seen among the smartphones I’ve tested so far. As usual, I set the screen’s brightness to 50% and put the phone to Airplane mode to compare the test with other phones.

However, the big battery also needs a long time to fully charge. The bundled 10W charger takes about 3 hours to reach 100% battery life from 0% with no support for other fast chargers. 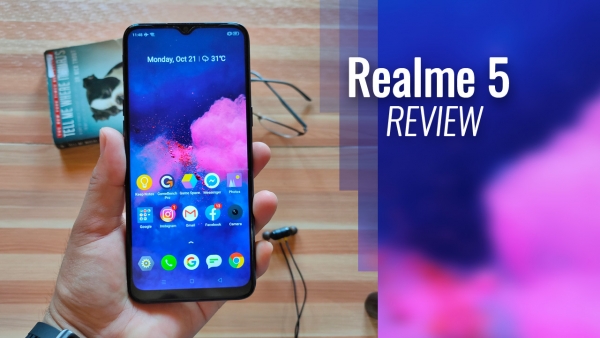 The Realme 5 gets a thumbs up from me.

The Realme 5 smartphone is an absolute win for consumers and a formidable competitor for other smartphone brands.

It provides a lot of advantages such as its big display, eye-catchy back design, quad cameras, and long-lasting battery. The only real drawback is the long charging time since the battery is too big.

It’s now available in Realme stores and kiosks throughout the Philippines. It can also be purchased online though Lazada and Shopee. 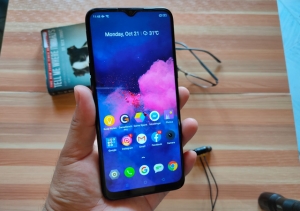 The Realme 5 smartphone is an absolute win for consumers and a formidable competitor for other smartphone brands.