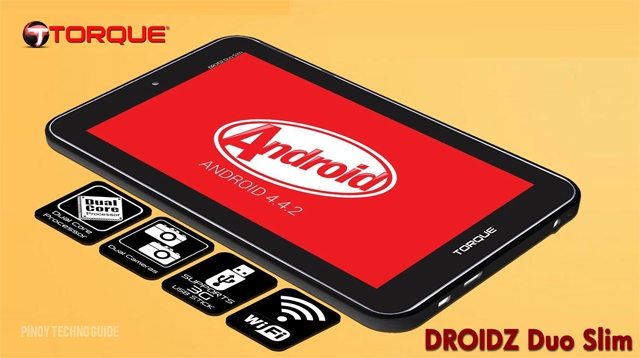 Are you looking for a cheap tablet that runs on the latest version of Android? Torque offers the Droidz Duo Slim for ₱2,399 only!

It also runs on a dual core processor, has a 7-inch capacitive display and supports 3G dongles like Globe Tatoo. However, it will face a fierce competition with the Cherry Mobile Fusion Aura.

Torque didn’t specify the chipset of the Droidz Duo Slim but it’s probably from MediaTek. It’s clocked at 1.2GHz – a few notches below the 1.5GHz processor of Fusion Aura.

It has 512MB of RAM which isn’t a problem because Android Kitkat is optimized for devices with low RAM. There’s also 4GB of onboard storage.

The Torque Droidz Duo Slim has a rear and front camera. We’ll update this when we get more details from Torque.