BY Daniel Gubalane ON May 16, 2019 WITH 20 Shares
Let's take a look at the advantages and disadvantages of the Samsung Galaxy A30!

The Samsung Galaxy A30 sits nicely between the mid-range Galaxy A50 and budget Galaxy A10. I did not have high expectations before reviewing the smartphone but was gladly surprised with some impressive features.

Here’s my full review of the Samsung Galaxy A30 including its design, display, performance, cameras, connectivity and battery life! 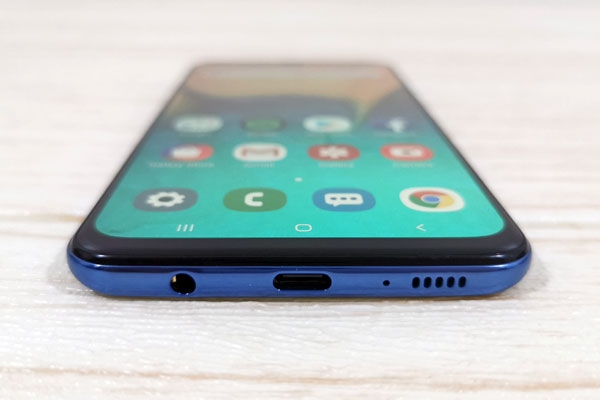 Bottom view of the Samsung Galaxy A30.

Samsung has done a good job of making their more affordable smartphones look almost as good as their flagship models.

Only the front panel of the Samsung Galaxy A30 is glass but it still looks sleek and doesn’t feel cheap. It can be a bit slippery though since the edges are slightly curved and smudges are still a problem.

The phone’s dual cameras, fingerprint sensor, and logo are at the back. Then, on its right side are the volume and power buttons while the SIM card tray is on the left side. Lastly, a USB Type C, 3.5mm audio jack and loudspeaker are on the bottom. 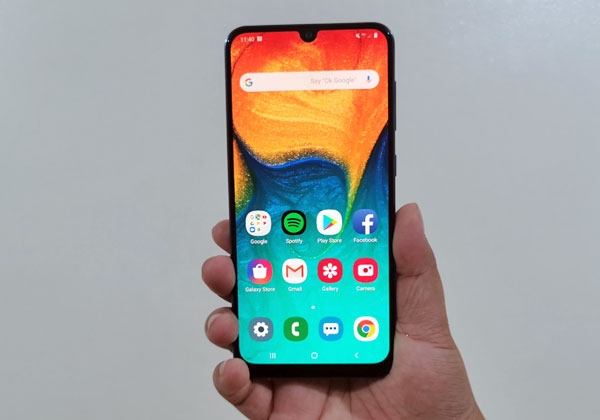 The Samsung Galaxy A30 has an impressive display.

The front panel is largely occupied by an almost edge-to-edge 6.4-inch Super AMOLED display and it’s perhaps the best feature of this phone. It’s very bright, vibrant and highly responsive.

It’s awesome to watch videos and browse through pictures on this screen! I also enabled the Night Mode in the Display Settings and it made it look even better.

If you need a reason to choose the Samsung Galaxy A30, the phone’s display should be number one on that list.

The Samsung Galaxy A30 has dual rear cameras composed of a 16 Megapixel main camera and 5 Megapixel ultra-wide camera.

It can produce good-looking pictures with natural colors and on-point sharpness although it takes a bit of time in focusing on the subject.

A scene recognition feature also enhances the image quality based on the subject. This includes increasing the saturation, improving the color balance and applying HDR. 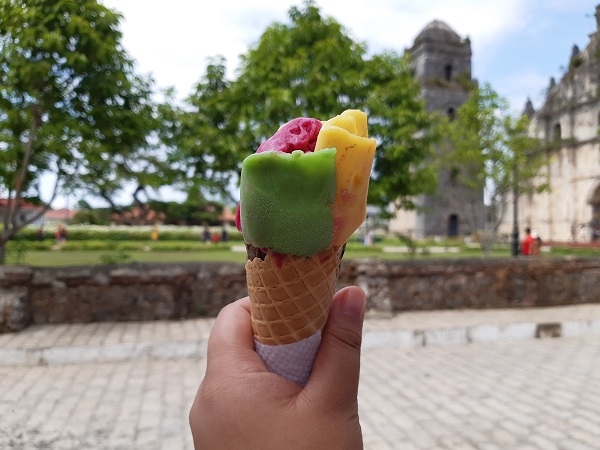 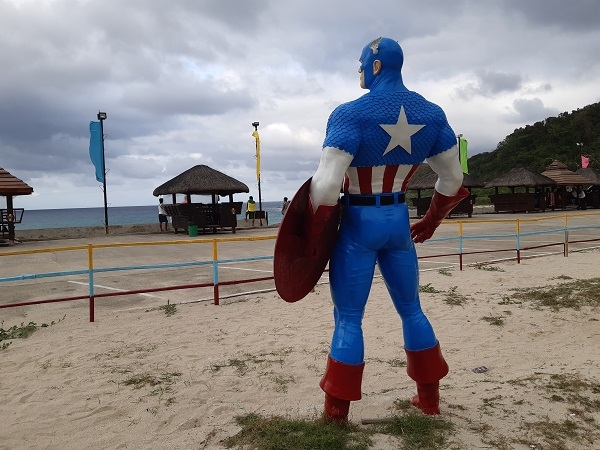 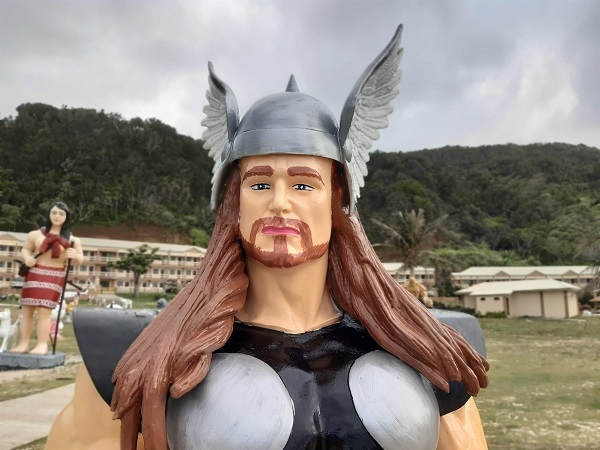 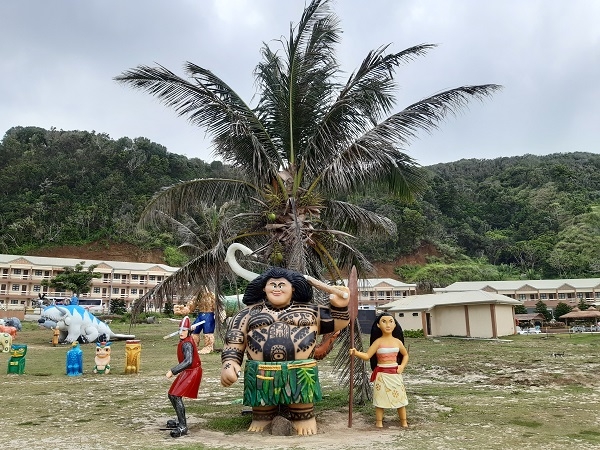 When the 5 Megapixel ultra-wide camera is used, it can capture a larger area but with obvious deformation at the sides of the image. It’s useful in landscape photography but when people are in the scene, they tend to look a bit stretched out. 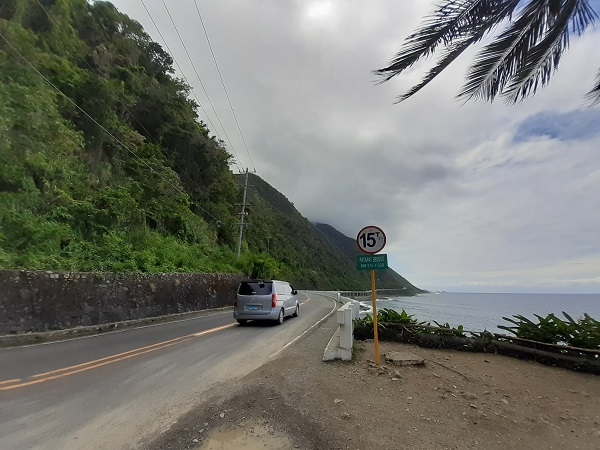 Videos have a maximum resolution of 1080p at 30 fps with plenty of details and decent colors. However, it lacks stabilization so handheld videos will be shaky.

The Samsung Galaxy A30 also has a 16 Megapixel selfie camera. The resulting selfies look sharp and detailed when the automatic beauty effect is turned off. 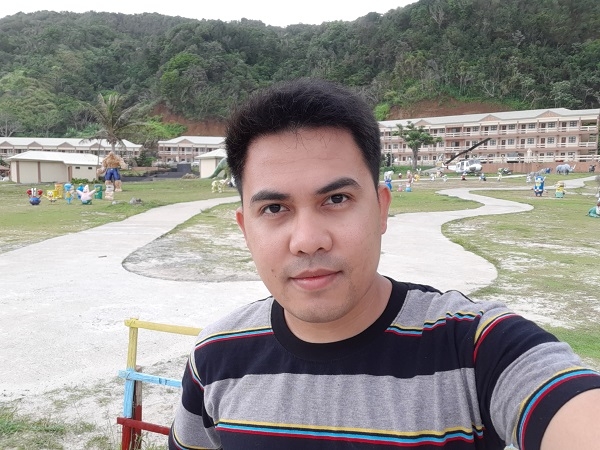 It doesn’t have the same color quality and dynamic range as the rear cameras but it’s enough for sharing on social media.

The Samsung Galaxy A30 uses the company’s own Exynos 7904 chipset. It has a 1.8GHz octa-core CPU, 4GB of RAM and Android 9.0 Pie operating system with OneUI software.

Opening apps and navigating the phone’s user interface is smooth enough with just a few occasional stutters. It got a score of 93,895 points on Antutu.

Here’s how this score compares to other smartphones in this price range:

In terms of gaming performance, the Samsung Galaxy A30 did not impress me at all. It can only run casual games smoothly and struggles with more resource intensive games.

It runs Mobile Legends at 30 fps but the high frame rate mode option is disabled. Meanwhile, NBA 2K19 and PUBG Mobile only run at 21 frames per second. That means these games will be laggy at high-quality graphics setting. 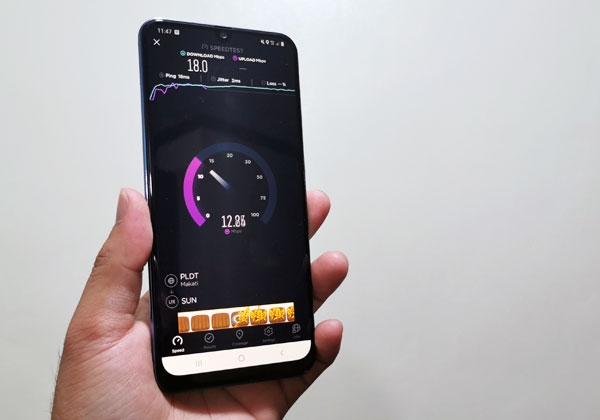 Testing 4G LTE data speeds on the Samsung Galaxy A30.

The Samsung Galaxy A30 is a dual SIM smartphone with 4G LTE connectivity. It provides fast mobile data speeds as long as 4G signal is present and can support multiple devices when used as a Wi-Fi hotspot.

It uses a USB Type-C port for charging and data transfer but retains a 3.5mm audio jack for audio output. However, my review unit did not come with earphones so I can’t tell its sound quality.

When music is played through the phone’s loudspeaker, it sounds good up to around 90% volume. 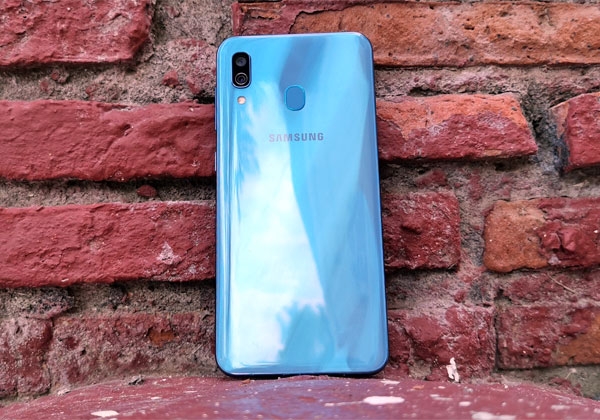 The fingerprint sensor at the back of the Samsung Galaxy A30.

The Samsung Galaxy A30 has a fingerprint sensor at the back and supports face recognition using its front camera. Both unlocking methods are fast and fairly accurate although there’s a warning that face recognition is less secure.

On the other hand, the device is well equipped with different sensors including a gyroscope. This means you can play Pokemon Go with AR mode. 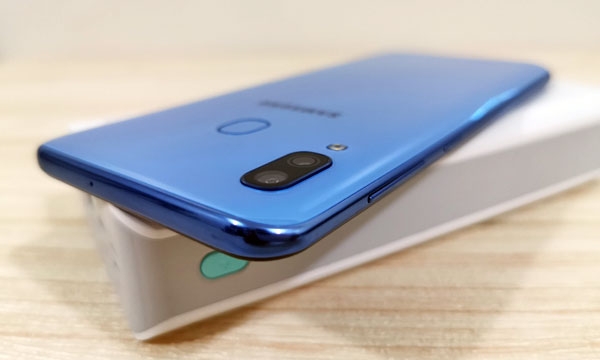 There’s really no need for a power bank with the Samsung Galaxy A30.

The Samsung Galaxy A30 has a large 4000mAh battery making it last more than a day on a single charge with my usual usage.

It got a score of 11 hours and 16 minutes on PCMark’s battery life test. This app simulates the continuous use of the phone. When performing this test, I always set the phone’s brightness to 50% and turn on Airplane mode.

Here’s how this score compares to other smartphones that I’ve already reviewed:

However, wasn’t able to test the charging speed of the Samsung Galaxy A30 because my review unit did not come with a charger. It supports up to 15W charging speed so I tried charging it with an 18W charger since that’s the nearest that I have.

The resulting charging time from 0% to 100% battery life is just a little over 2 hours. 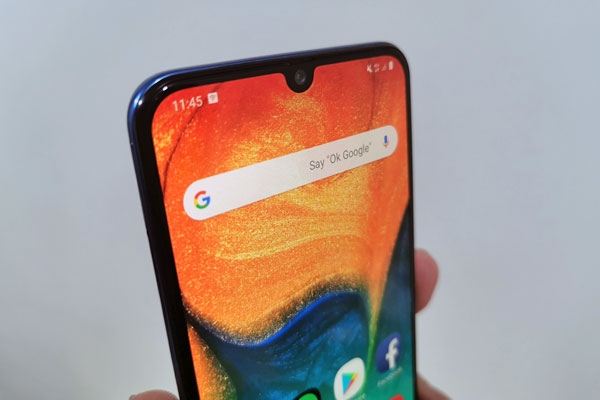 The Samsung Galaxy A30 earns a PINOY TECHNO GUIDE Recommendation!

I recommend the Samsung Galaxy A30 for its great display and decent cameras. Its battery life and connectivity are also above average.

If you’re looking for a gaming smartphone, the Samsung Galaxy A50 might be a better choice since this one struggles with heavy games. However, that means an additional ₱3,000 in your budget. 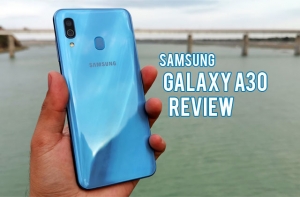 The Samsung Galaxy A30 has an impressive display, decent cameras, and above average battery life.