The Samsung Galaxy A12 is a budget-friendly smartphone that features a 6.5-inch HD display, 48MP quad-camera setup, Helio P35 chipset, and 5000mAh battery.

I’ve been testing the device for almost a month including its design, display, performance, cameras, battery life, and overall quality. Here’s my full review.

What I dislike about the Samsung Galaxy A12: 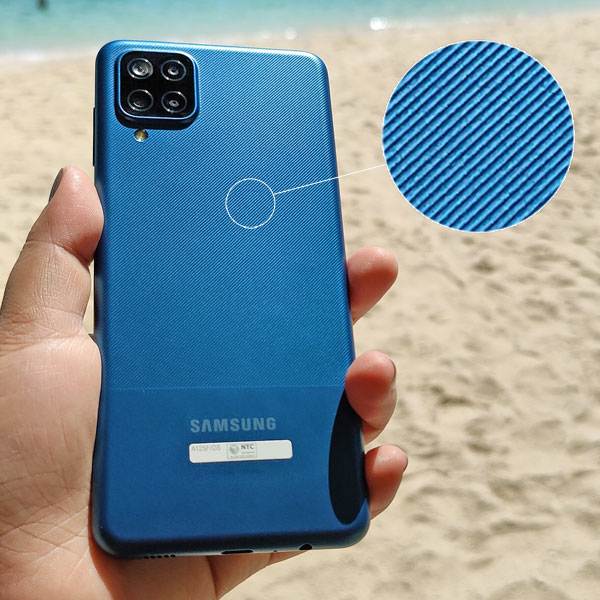 The textured back of the Samsung Galaxy A12.

The Samsung Galaxy A12 has a glass front panel, plastic back, and plastic sides. This is a typical build for smartphones in its price range.

A large portion of its back is textured which improves the grip and provides a fun stress reliever. Its cameras are located at the top left corner and mimic the look of camera matrices in more expensive models.

The power button has an embedded fingerprint scanner and resides on the right side of the device while the SIM card tray is accessible on the left side. A USB Type-C port, 3.5mm audio jack, and loudspeaker grille are found at the bottom. 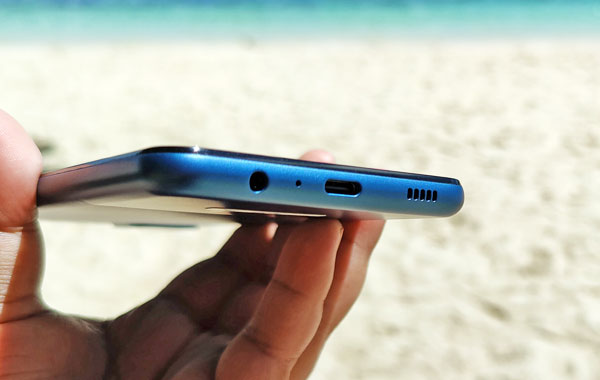 The USB Type-C port and audio jack of the Samsung Galaxy A12.

Its 6.5-inch HD+ display occupies the front of the phone with minimal side bezels and a small notch at the top for the selfie camera.

The screen is responsive enough to touch inputs and surprisingly bright enough for outdoor use even under direct sunlight. Of course, it doesn’t have the same color vibrancy as other Samsung smartphones that use AMOLED technology. 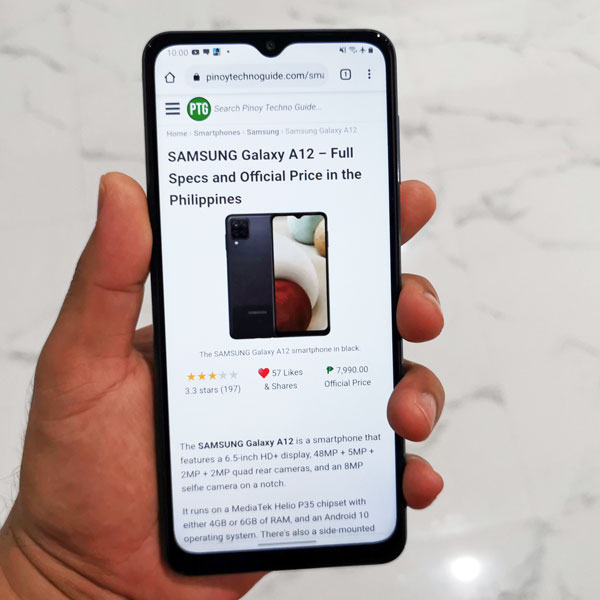 Pinoy Techno Guide on the Samsung Galaxy A12.

It only supports up to 5 multi-touch inputs instead of the usual 10 and doesn’t look that sharp. However, I’ve been using smartphones with ultra-high screen resolutions and high screen refresh rates so these quirks stick out to me.

On the positive side, the phone’s software offers several display features including a system-wide dark mode and blue light filter. Both can be scheduled to turn on at a specific time to help reduce eye strain at night. 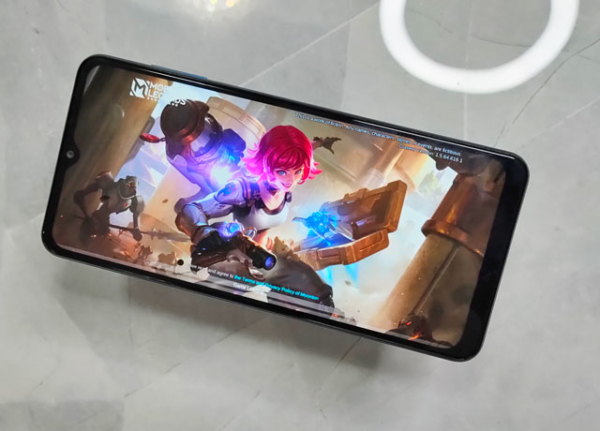 Playing Mobile Legends on the Samsung galaxy A12!

A MediaTek Helio P35 chipset powers the Samsung Galaxy A12 along with either 4GB or 6GB of RAM. These should be enough to run most apps such as Facebook, Google Chrome, and YouTube.

However, it has an underwhelming performance. It takes 15.19 seconds to compute 1 million digits of Pi using RealPi Benchmark. There are also lags and stutters when a lot of apps are running in the background and when there are a lot of notifications.

Just like other smartphones I have reviewed, I tested the average framerate of the device while playing these games. It can run popular games like Mobile Legends, Call of Duty Mobile, and PUBG Mobile but in low graphics quality only. Its gaming performance isn’t that smooth with lags and frame drops during clashes.

Here’s the Samsung Galaxy A12 Gaming Review with FPS Tests. 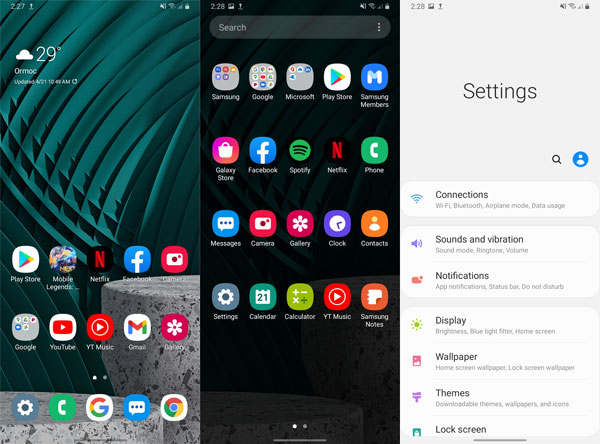 Of course, the operating system and UI software contribute a huge part to a phone’s performance. The Samsung Galaxy A12 runs on Android 11 OS with One UI 2.5 software.

The UI and icons look neat with an intuitive arrangement of settings and a focus on reachability for one-hand usage.

However, the software comes with a lot of pre-loaded apps that might not be all useful. These include several Samsung apps and Microsoft apps. Thankfully, most of these apps can be uninstalled.

For security, the Samsung Galaxy A12 has a side-mounted fingerprint scanner that works most of the time but with a noticeable lag in unlocking the device. 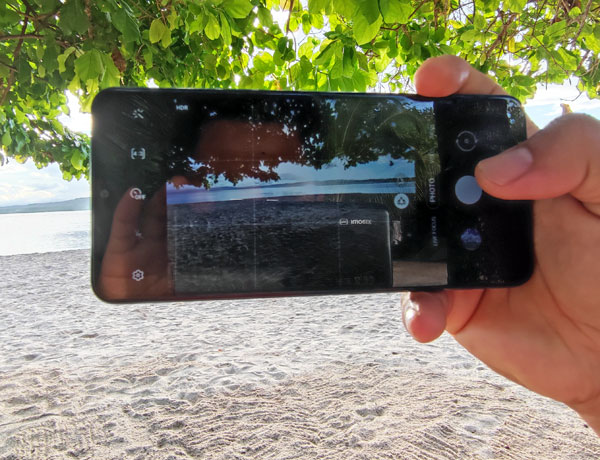 The camera app of the Samsung Galaxy A12.

The Samsung Galaxy A12 has a quad rear camera setup composed of a 48MP main camera, 5MP ultra-wide camera, and two 2MP cameras for macro shots and depth information.

It renders skin tone well and can produce good-looking portrait shots in well-lit situations. It can also take Instagram-worthy pictures of flowers, food, and other colorful subjects. 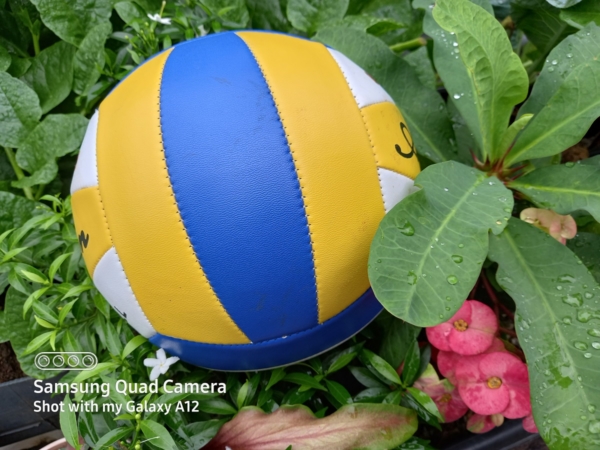 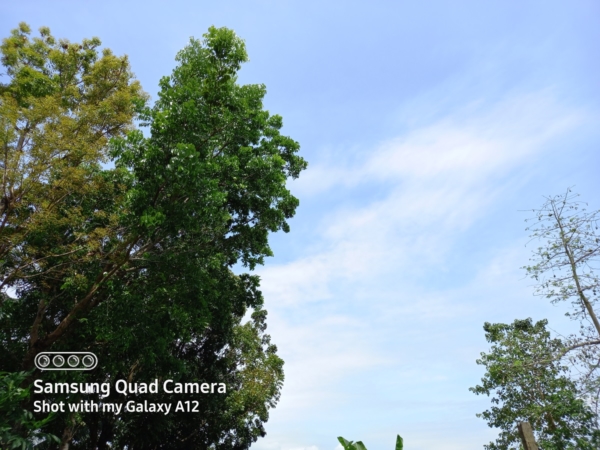 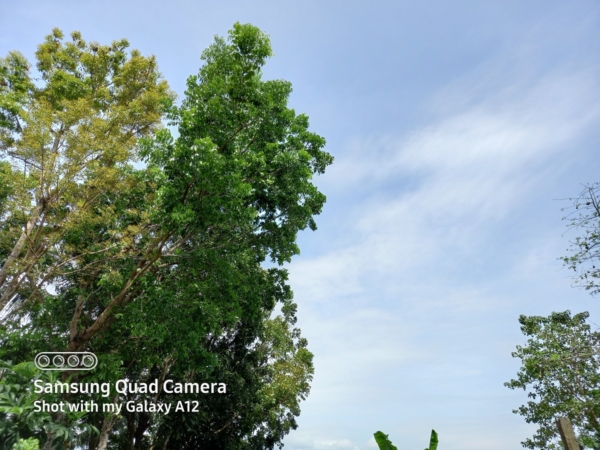 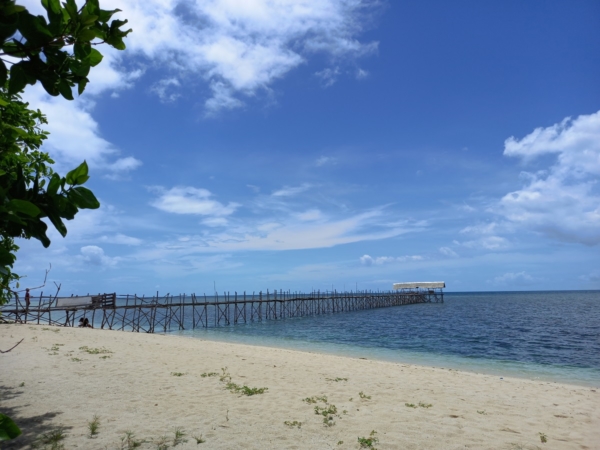 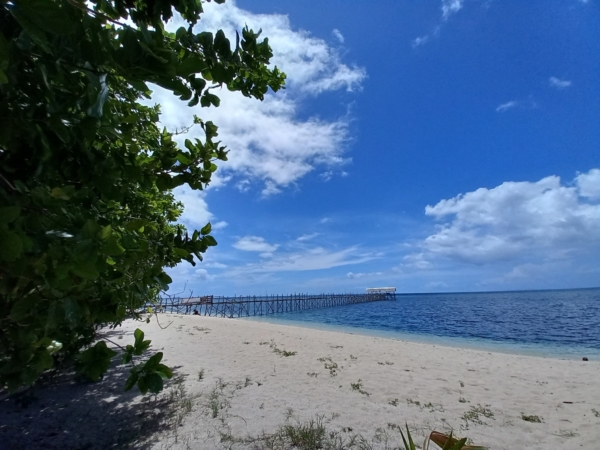 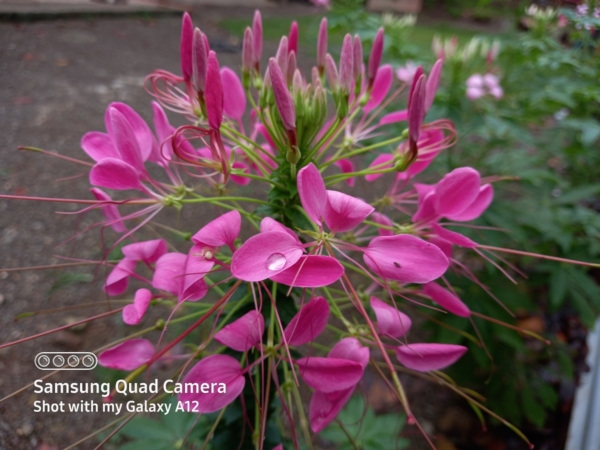 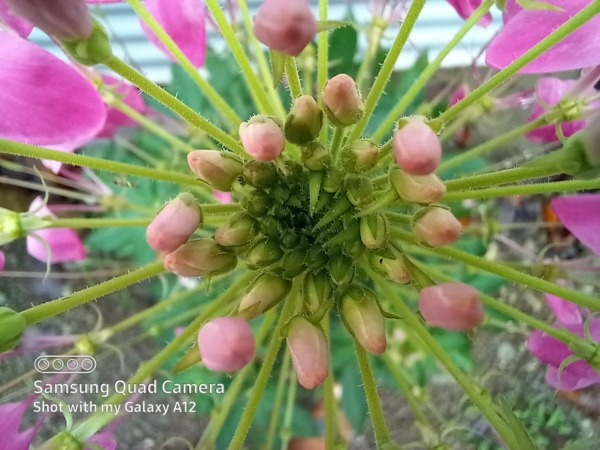 The ultra-wide camera is surprisingly decent. It has a 123˚ field of view and can capture a wider scene. However, the ultra-wide shots are not as sharp nor as bright as the regular ones.

At night, the weakness of the Samsung Galaxy A12’s cameras is revealed. Low-light pictures are generally soft and grainy. There’s no dedicated Night mode on the default camera app so the LED flash or another light source is a necessity. 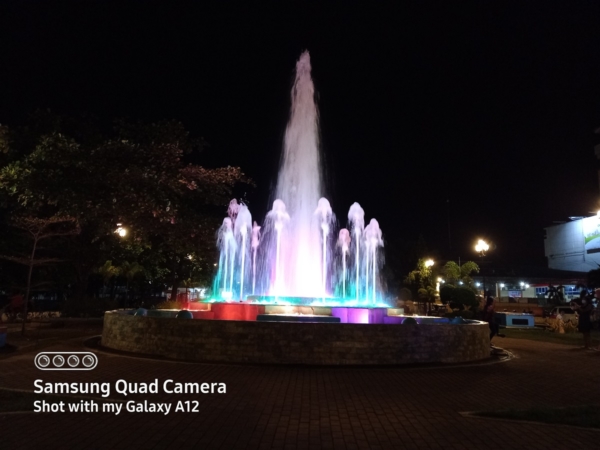 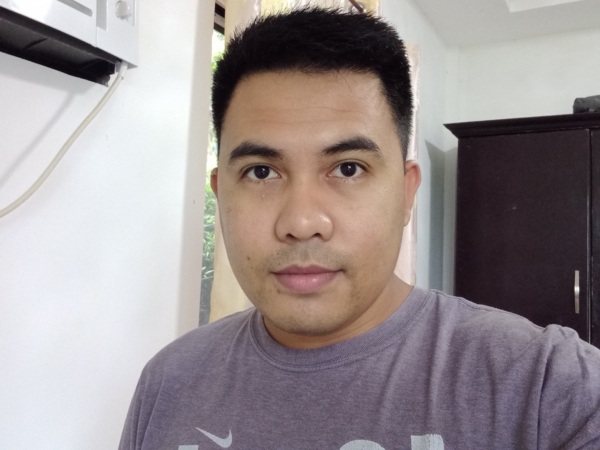 Meanwhile, an 8 Megapixel front camera takes care of selfies. However, it can only produce decent selfies in well-lit situations. Indoor selfies are grainy and have the tendency to overexpose backgrounds.

Its cameras are promising but some tweaks in the camera app have to be implemented to realize its full potential. Hopefully, Samsung can release a software update to include a manual HDR mode and dedicated Night mode. 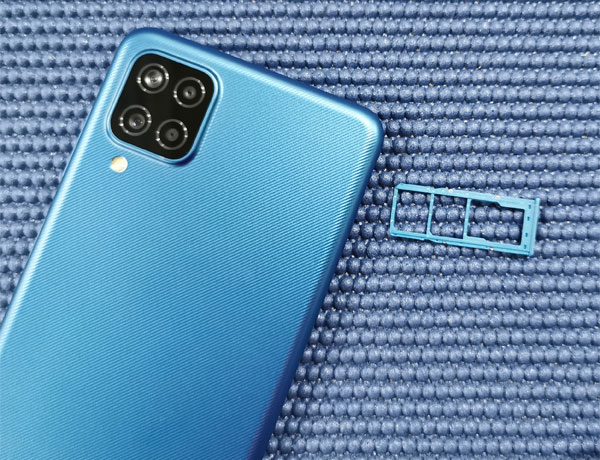 The SIM and microSD card tray of the Samsung Galaxy A12.

The Samsung Galaxy A12 is a dual-SIM smartphone with 4G LTE connectivity. It can provide good mobile internet speeds in an area with great 4G signal coverage.

It also supports VoLTE and voice calls sound average through its earpiece. However, its loudspeaker isn’t very loud and even has noticeable distortion from around 85% volume and up.

Thankfully, it has Dolby ATMOS for earphones which greatly improves the audio quality. A free set of wired earphones even comes free inside the box although I recommend getting better quality TWS earphones or even wired ones for a couple hundred bucks. 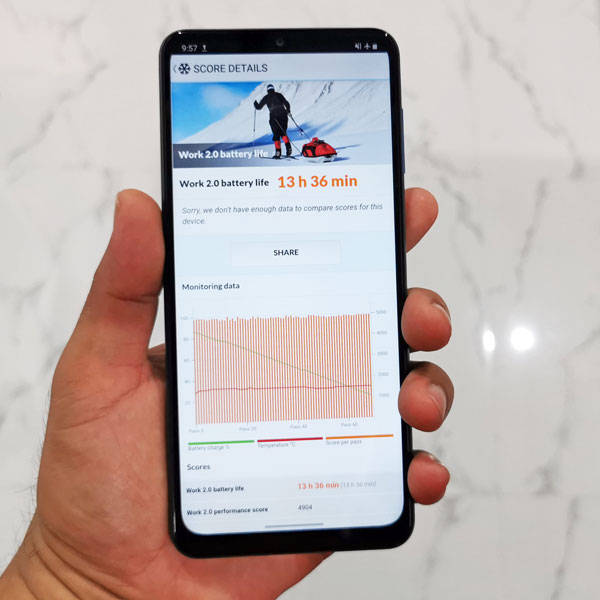 PCMark Battery Life Test 2.0 score of the Samsung Galaxy A12.

A massive 5000mAh battery powers the Samsung Galaxy A12. It can last almost two full days on a single charge with casual usage. In my usual usage, the phone still has around 35% to 40% battery capacity after a day.

On the PCMark Battery Life Test 2.0, the device got a battery life score of 13 hours and 36 minutes. It’s almost as long-lasting as the realme 6i and slightly better than the Huawei Y7p.

However, it takes quite a long time at around 3 hours and 20 minutes to re-charge the device from 0% to 100% battery capacity using the bundled 15W fast charger. 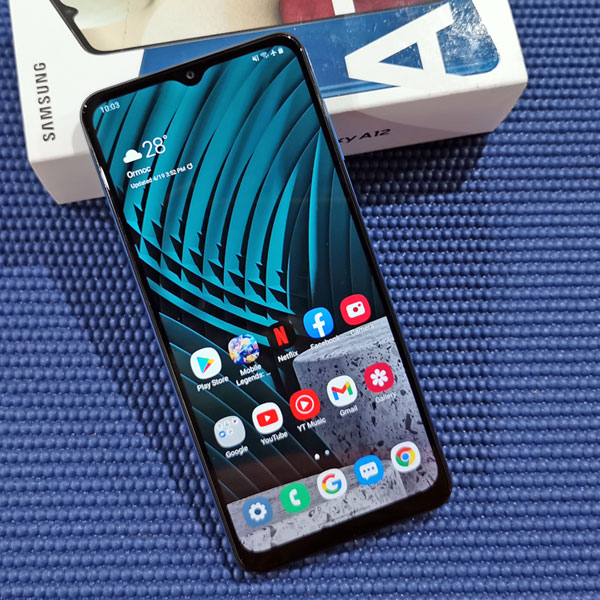 The Samsung Galaxy A12 and its box.

I can recommend the Samsung Galaxy A12 as a Samsung-branded smartphone with a promising high-res camera and long battery life.

Its bright screen was also a pleasant surprise but it’s not as vibrant as the brand’s AMOLED offerings. There are also some performance issues especially in gaming, low-light photography, and charging time. 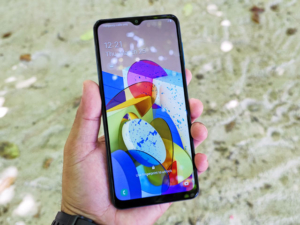 The Samsung Galaxy A12 has a bright display, promising 48MP hi-res camera, and long battery life.