After using the realme 8 for several weeks, I realized that it focuses more on photography and the overall smartphone experience.

It features a dazzling and bold design choice, a Samsung-made Super AMOLED display, and a 64MP quad-camera system with several shooting modes but still powered by the same MediaTek Helio G95 chipset. 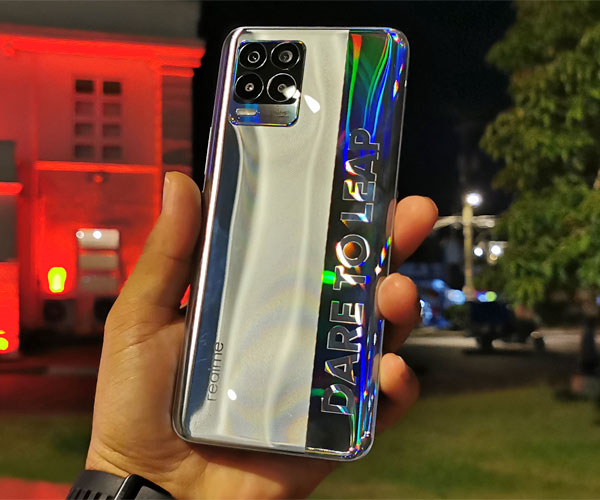 Behold the dazzling design of the realme 8 smartphone.

The realme 8 flaunts a new “Infinite Bold Design” with a dazzling two-tone back panel. The larger left portion has a glossy finish with micro-patterns underneath while the narrower right portion has a mirror finish with the brand’s “DARE TO LEAP” slogan.

It’s reminiscent of Nike’s “Just Do It” and I think many users will like it despite being slightly polarizing. The mirror finish also gleams with eye-catching rainbow colors in certain angles making the device stunning, especially at night. 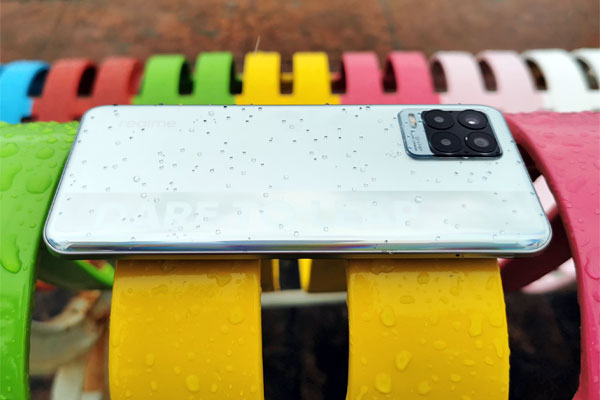 Side view of the realme 8.

At 7.99mm and 177 grams, it’s a sleek and nimble smartphone. It’s comfortable to use although the back panel can use a wipe every so often to remove accumulated smudges.

The front of the device is occupied by its tall display with a tiny punch-hole for the selfie camera on its top left corner. It also has narrow bezels all around except for the chin but it’s not that disruptive. 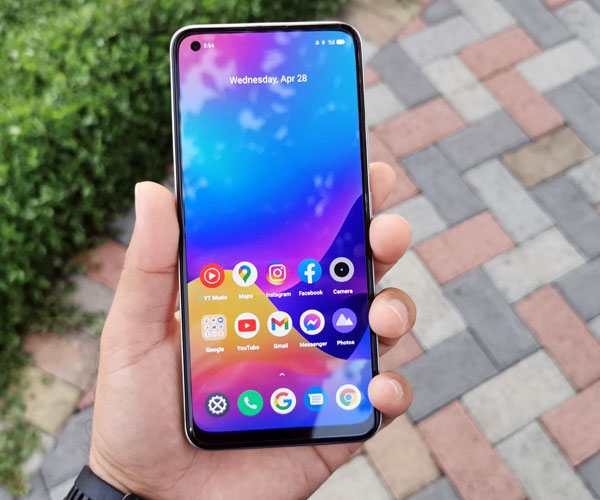 Here’s the Super AMOLED display of the realme 8.

It’s an upgrade in terms of screen technology compared to the usual LCD panels. It’s brighter when used outdoors with a peak brightness of 1000 nits. This means I can read text messages and Facebook posts even under the noontime sun.

It also has vivid colors and deep blacks that make dark mode and night-time reading so much better and less straining to the eyes. 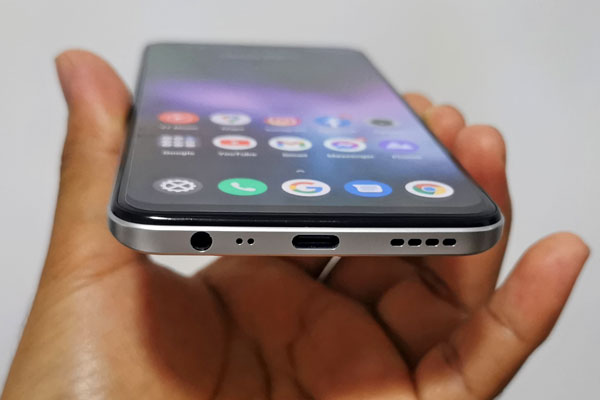 The realme 8 is a slim smartphone.

However, it’s a downgrade in terms of screen refresh rate. This is noticeable if you’ve been using a high refresh rate smartphone before. It’s is a brave choice for realme and I appreciate it.

A high screen refresh rate consumes a lot of battery power and can sometimes cause overheating if not managed properly by the system. It makes the user interface feel substantially smoother but at a cost.

The realme 8 retains the 180Hz touch sampling rate which means the display reads touch inputs quicker. This is a better feature for gamers who need a low latency display. Most of the popular games in the Philippines are also limited to 60 fps except for NBA 2K20. 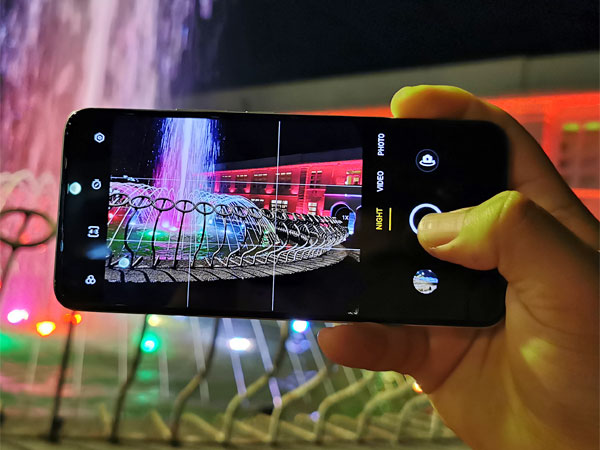 The camera app of the realme 8.

The realme 8 has a quad-camera setup at the back. This is composed of a 64 Megapixel main camera, 8 Megapixel ultra-wide camera, 2 Megapixel macro camera, and another 2 Megapixel monochrome depth sensor.

These are controlled through the realme camera app with an intuitive layout. Different modes are easily accessible including Night mode, Starry Mode, Slow Motion, Movie mode, Expert mode, and more. 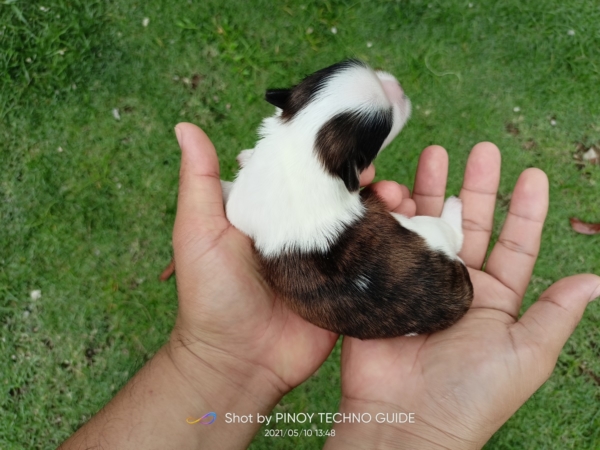 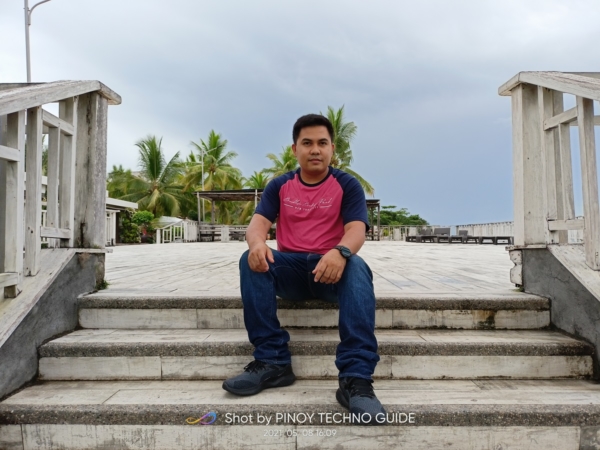 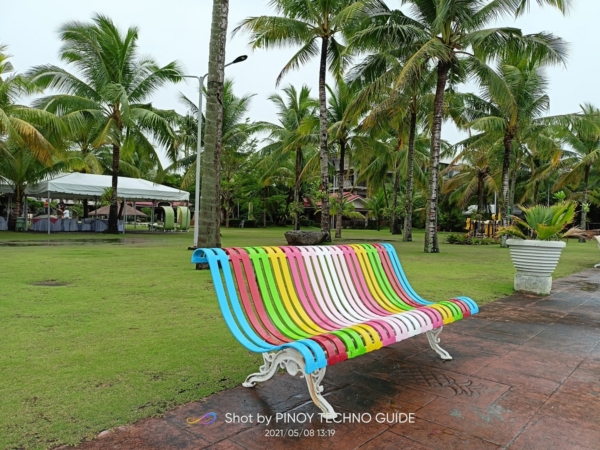 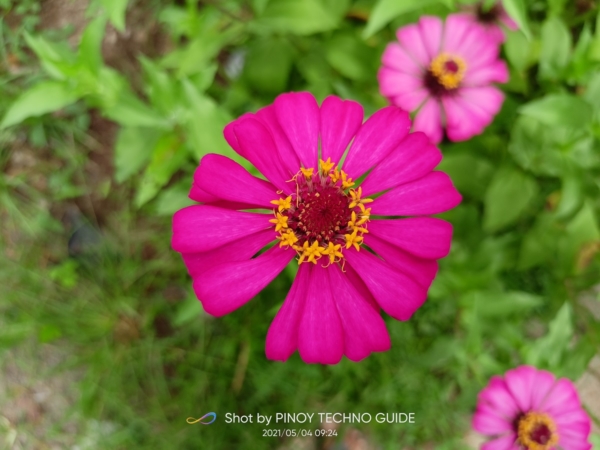 In the default shooting mode, the 64MP camera uses pixel binning technology to produce 16 Megapixel pictures. These look good with plenty of details, vibrant colors, and a well-calibrated dynamic range.

I love how it rendered the fur of the newborn puppy in the sample picture. It also captures greenery and skin tone faithfully. Colorful subjects like the rainbow bench and flower look pleasant as well with no oversaturation. 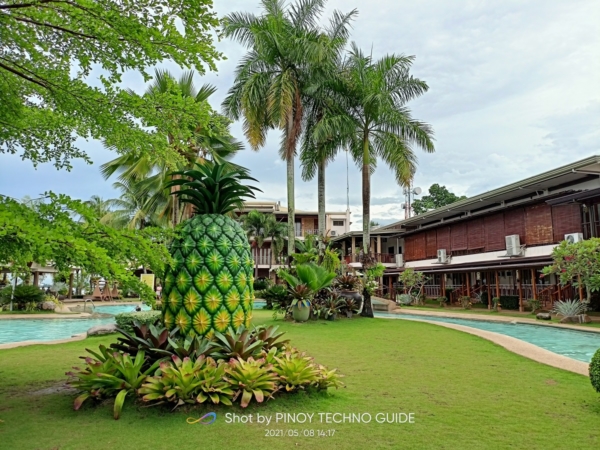 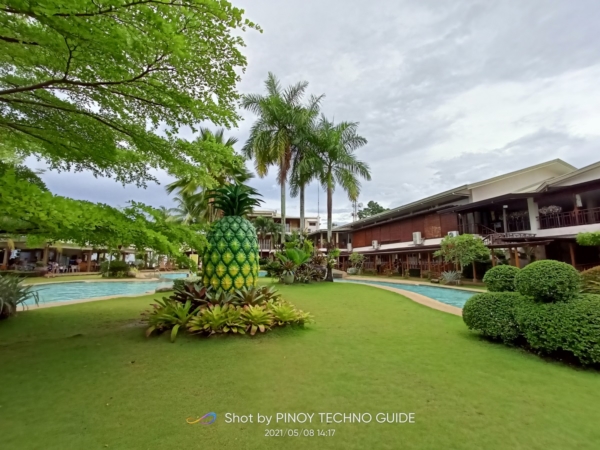 The 8MP ultra-wide camera captures a wider field-of-view perfect for landscape shots – up to 119°. However, it doesn’t have the same sharpness as the main camera. 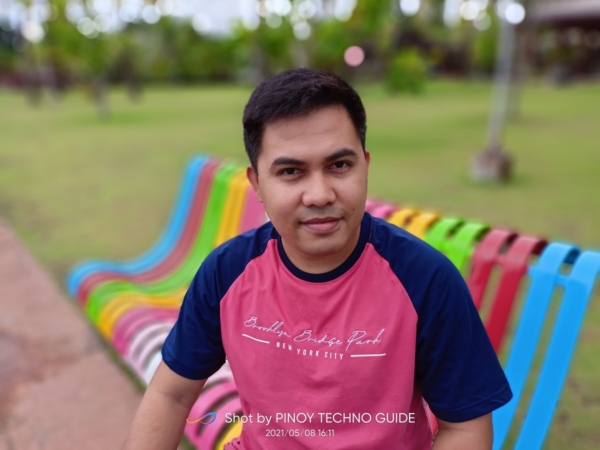 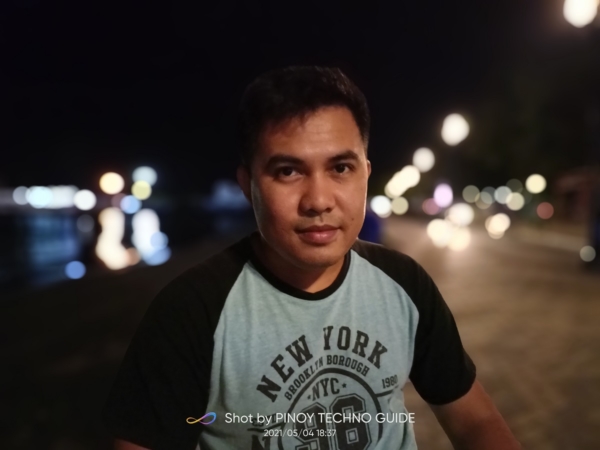 Perhaps the most interesting feature of the realme 8’s camera is its Portrait mode with different styles for the background blur.

Neon Portrait results in the most beautiful portrait shots from the device. It works best at night and produces dreamy lights in the background but background separation still needs improvement especially with complex backgrounds. 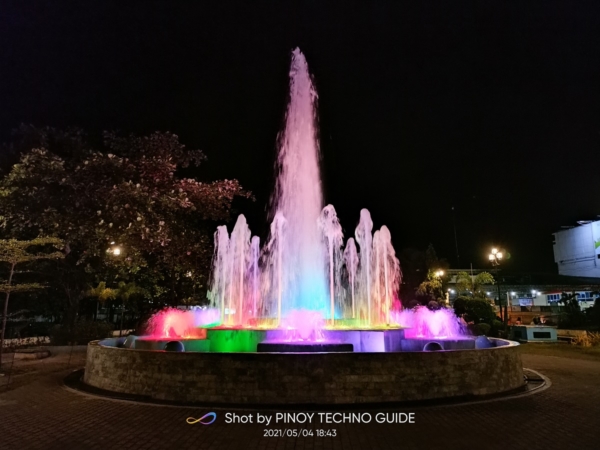 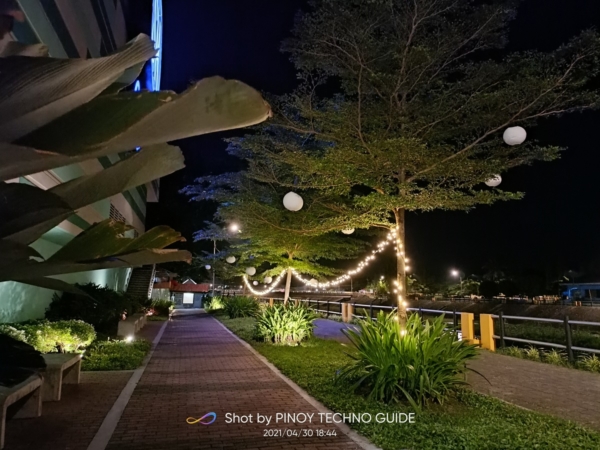 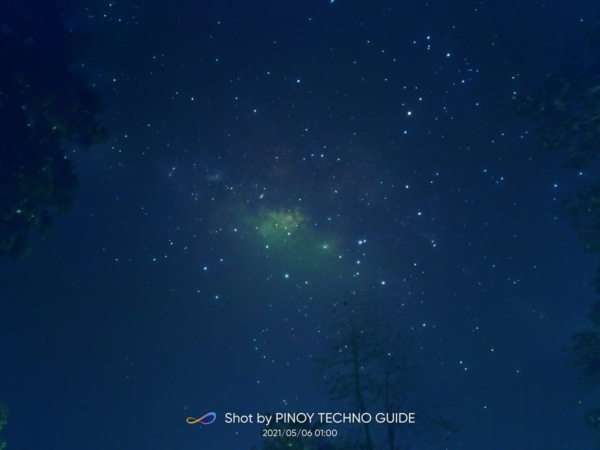 Low-light photography is another area where the realme 8 excels at. It produces impressive Night Mode shots in 3-4 seconds while the Starry Night mode can capture the night sky.

It has a tendency to render the night sky with a bluish tint though. This can be further optimized through software updates or processed through apps like Snapseed. 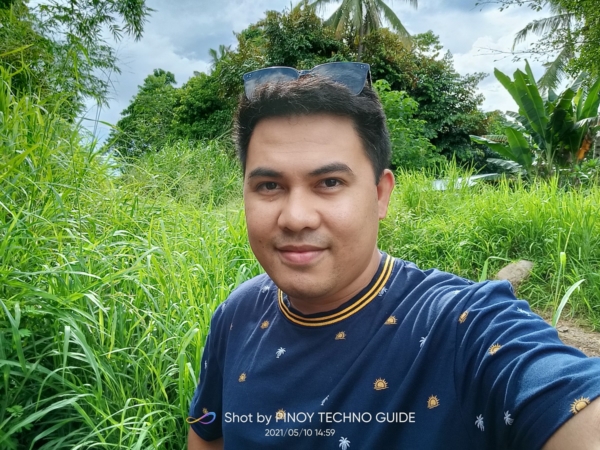 On the other side of the realme 8 is a 16 Megapixel selfie camera that takes sharp selfies with balanced skin tone and overall color saturation.

I also noticed that it optimizes the dynamic range in video calls making faces look pleasant despite a poorly lit environment.

Meanwhile, its main rear camera can record videos up to 4K resolution at 30 frames per second. The videos look sharp with natural-looking colors and electronic image stabilization but there are noticeable artifacts when the lighting isn’t optimal.

Dual Video records videos from both the rear and front cameras while Slo-mo captures videos at up to 120 frames per second. There’s also a Movie mode that mimics the interface of a dedicated video camera. 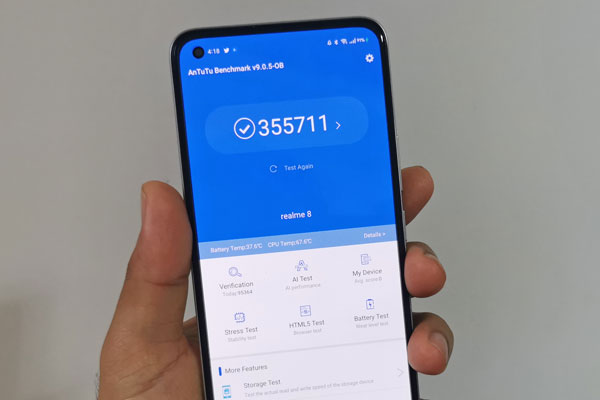 Antutu Benchmark score of the realme 8.

Apps open quickly and scrolling down news feeds and websites feel smooth. Switching across different apps is also seamless with virtually no lag on the phone’s interface. 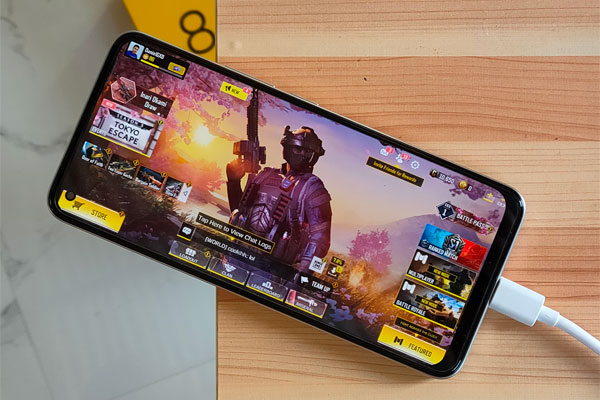 Call of Duty Mobile on the realme 8

It achieved average frame rates of 56 FPS in Mobile Legends, 50 FPS in Call of Duty Mobile, and 30 FPS in PUBG Mobile. These were all conducted with the games set at HIGH graphics quality.

The results are slightly lower than the realme 7 which runs on exactly the same chipset. Software updates must have made these games a bit more resource-intensive. The general gaming performance is still smooth but lags are bound to occur during clashes and team fights. 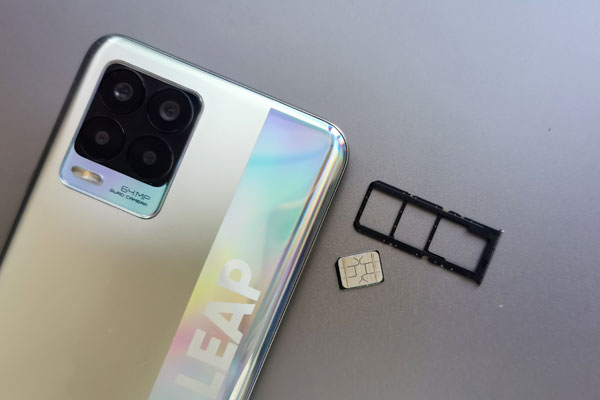 The realme 8 has dedicated slots for two SIM cards and a micro-SD card.

The realme 8 is a dual-SIM smartphone with 4G LTE connectivity, dual-band Wi-Fi, and Hi-Res audio certification.

It can provide fast mobile internet speeds in areas with decent LTE signals. Connection to Wi-Fi networks can be spotty at times though. Some might also argue that 5G connectivity should be included in mid-range smartphones now but a huge portion of the country is simply not yet ready.

Meanwhile, voice calls sound alright on the phone’s earpiece and loud enough through the loudspeaker albeit slightly tinny due to the slim body. The best sound quality comes from the 3.5mm audio jack or through Bluetooth earphones that support AAC like the realme Buds Air 2 Neo. 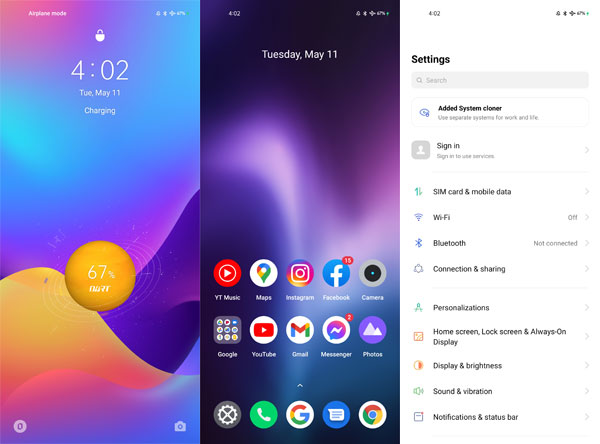 The realme 8 comes with Android 11-based realme UI 2.0 software out of the box. It looks neat and intuitive with well-arranged settings and useful features.

However, there are several pre-loaded apps that users may not actually use. Its built-in theme store also pushes notifications that can be annoying but can be easily disabled.

For security, the device has an under-display fingerprint scanner that’s quite fast and accurate. There are also privacy features like “Private Safe” for your secret files, a child-friendly “Kid Space”, and “App Lock” for individual apps. 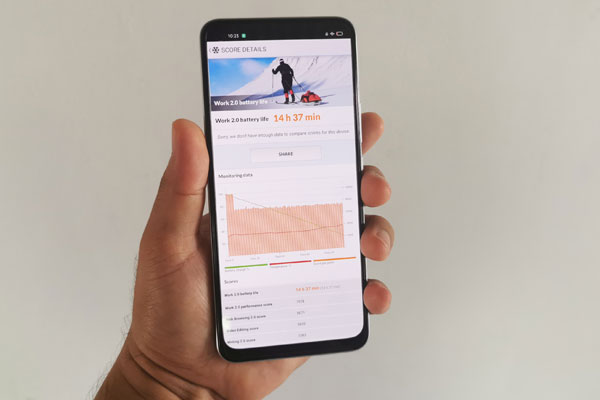 A large 5,000mAh battery keeps the realme 8 up and running for almost two days on a single charge when used conservatively. In my normal usage, it usually has around 35% of battery charge left after a day.

It scored an impressive battery life score of 14 hours and 37 minutes on the PCMark Battery Life Test 2.0 with its screen brightness set to 50% and Airplane Mode turned on.

I also found the charging speed of the realme 8 to be exactly the same as the brand’s claim of 65 minutes. Using the bundled 30W DartCharge adaptor, it re-charged from 0% to 100% battery capacity in 1 hour and 5 minutes. 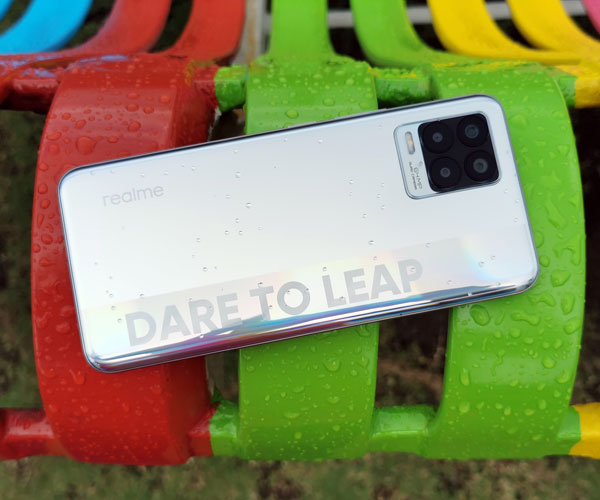 Are you going to leap to the realme 8?

The realme 8 smartphone has a dazzling design, high-quality display, feature-packed cameras, and a long-lasting battery. However, its gaming performance is held back by the same chipset as its predecessor.

It’s a great choice for aspiring content creators and can dazzle your social media feeds with good-looking selfies and gorgeous travel or stay-at-home photos. However, I’m not fully on board with recommending it to hard-core gamers. 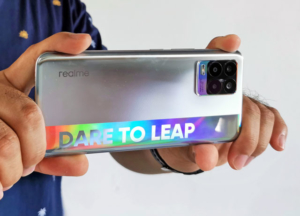 The realme 8 smartphone has a dazzling design, high-quality display, feature-packed cameras, and a long-lasting battery.