The realme 6 smartphone offers one of the most interesting features previously exclusive to more expensive smartphones – 90Hz screen refresh rate!

I used the device for more than three weeks and published the unboxing experience as well as the results of several gaming tests. Now that I’ve completed all the tests including its cameras and battery, here’s a full review of the realme 6. 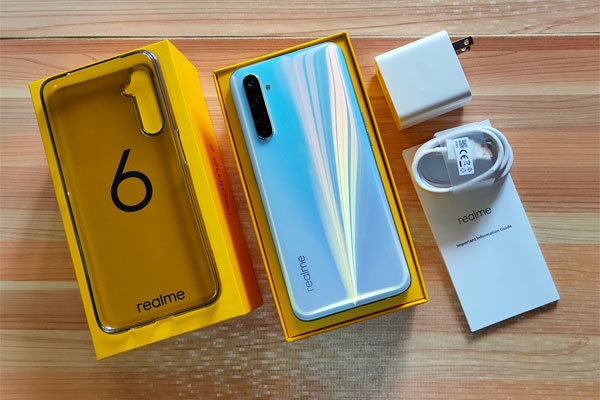 The realme 6 and its accessories inside the box.

The realme 6 has a glossy back cover with “comet-inspired” light streaks that look like a comet’s tail when it comes close to the sun (perihelion). It’s striking and can be compared to the designs of more premium handsets.

However, it’s just a glossy plastic material and not glass so a fair amount of smudges accumulate after a day of use. Thankfully, the FREE transparent phone case included inside the box can protect the device while keeping the design visible.

Its power button is found on the right side with an embedded fingerprint scanner. This is an ergonomic placement since it’s where the user’s thumb usually rests.

On the other side are the volume buttons and SIM card tray which contains separate slots for two SIM cards and a microSD card. A 3.5mm audio jack, microphone, USB Type-C port, and loudspeaker are all at the bottom.

The realme 6 won’t look out of place among smartphones twice or thrice the price. You’ll just have to take extra care since its back is not scratch resistant and a fall might cause a dent while keys can leave scratch marks. 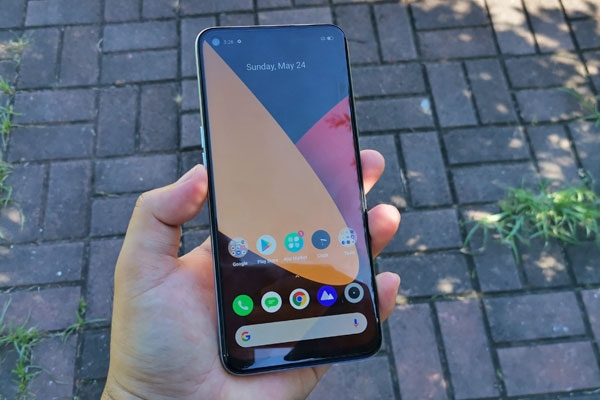 Outdoor visibility of the realme 6 display.

The front panel of the realme 6 is occupied by a 6.5-inch FHD+ display with a punch-hole at the upper right corner. It’s not distracting at all and only occupies a small space among the notification icons.

Graphics on the screen look sharp with decent color reproduction. It also has enough brightness for outdoor use but still struggles under direct noon-time sun.

Of course, one of the highlight features of the realme 6 is the 90Hz refresh rate of its screen. This is 50% higher than the conventional 60Hz display of most smartphones and makes the user interface smoother with animations and transitions that look snappier. 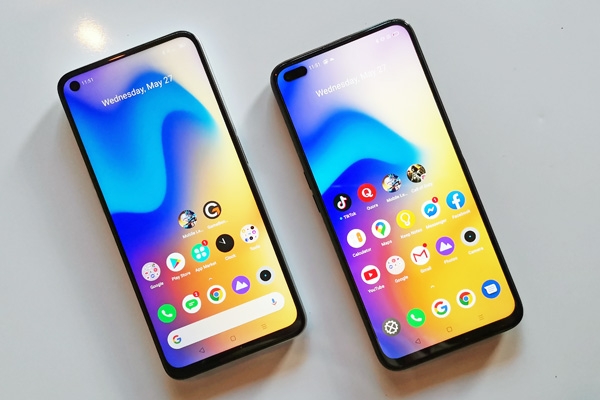 Viewed from the front, the realme 6 (left) and realme 6 Pro (right).

It will be hard to switch back to normal 60Hz screens once you’ve been accustomed to this feature. It re-defines what a smooth smartphone looks and feels like.

It’s great that realme was able to introduce the 90Hz screen refresh rate at this price range. Most smartphones with high refresh rates are currently flagship models with more than twice the price tag. However, it also takes a hit on battery life which we’ll take a closer look at the battery section of this review.

A MediaTek Helio G90T powers the realme 6 with either 4GB or 8GB of RAM. I have the 8GB RAM + 128GB storage variant and it went through several tests for performance.

It generally performs smoothly when opening apps or scrolling down newsfeeds and websites. There’s virtually no lag when switching from one app to another.

Here are some benchmark scores of the realme 6. Download these benchmarking apps and test your current smartphone to compare its performance with the realme 6.

The MediaTek Helio G90T is a gaming-focused chipset. Hence, I expected the realme 6 to have a great gaming performance. However, I got mixed results.

It performed smoothly with PUBG Mobile and Call of Duty scoring perfect 60fps frame rates when the graphics quality is set to low and 35-40fps when high. However, it struggles with Mobile Legends and only achieved an average frame rate of 36fps with high-quality graphics.

Meanwhile, the phone’s 90Hz screen refresh rate enables some games to reach a very, very smooth 90fps frame rate including NBA 2K20. However, this only happens when the graphics quality is set to low.

I’ve read many comments on my Facebook posts saying that the realme 6 has a heating problem. I don’t agree. You should first find the graphics settings where the device achieves close to 60 fps and then observe the phone’s temperature while playing at those settings.

Any phone, whether powered by a MediaTek or Qualcomm chipset, will heat up if pushed beyond its capabilities.

The realme 6 only reached 43°C during my PUBG Mobile gaming test. The usual battery temperature reported by GameBench Pro is around 41°C which can feel warm but still normal for phones while playing games. 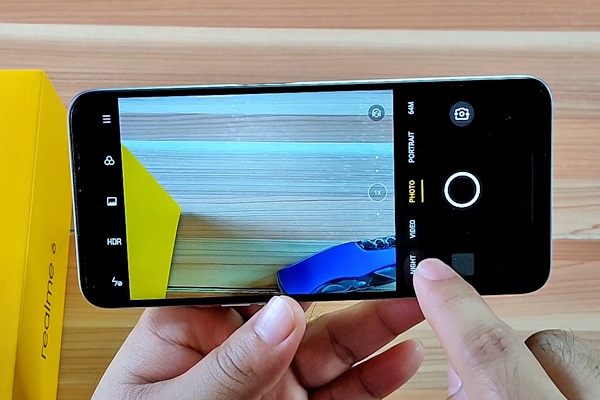 The camera app of the realme 6.

By default, the pictures have a 16 Megapixel resolution since the main camera uses 4-in-1 pixel binning technology. The camera app also includes several shooting modes such as ultra macro, portrait, full 64MP, slow-mo, expert, time-lapse, and a dedicated night mode. 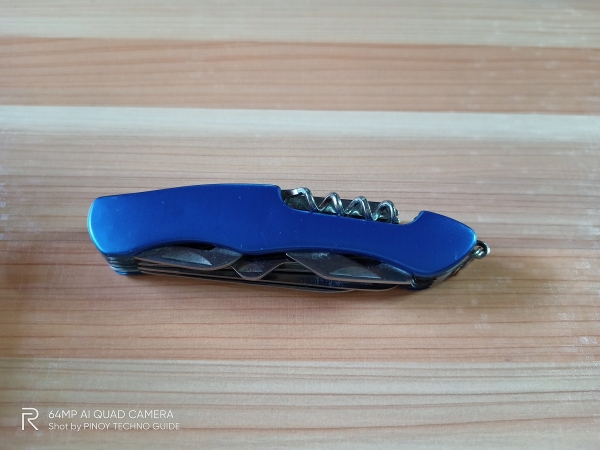 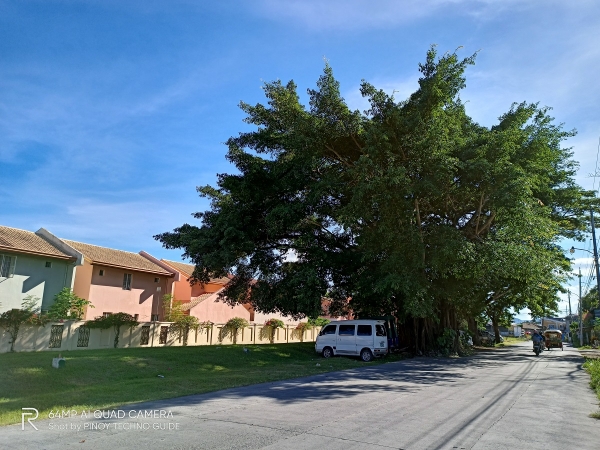 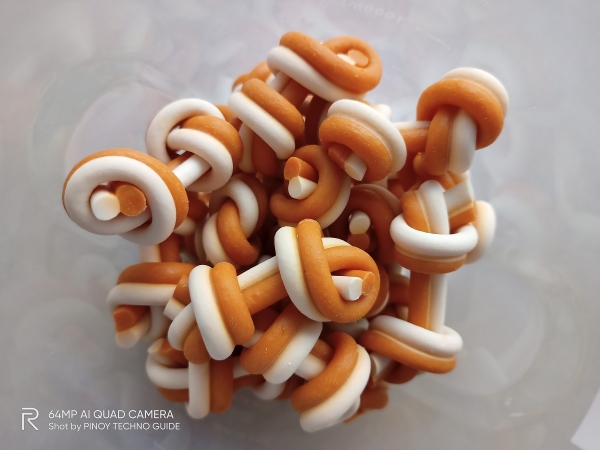 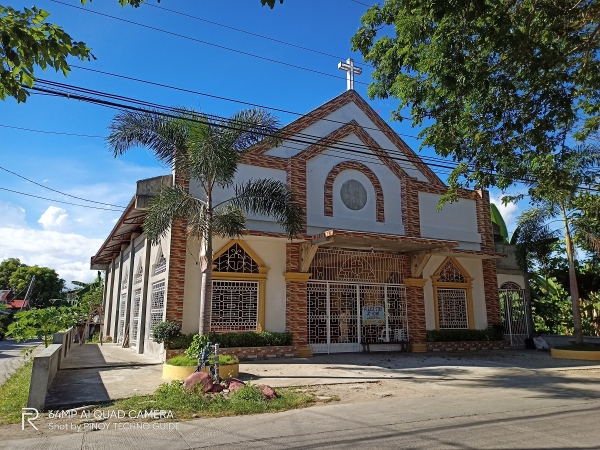 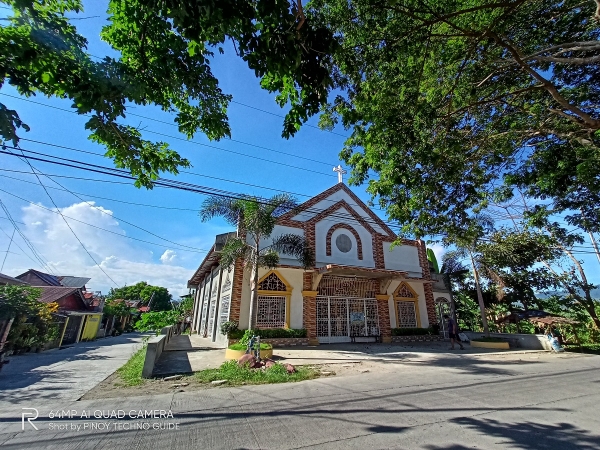 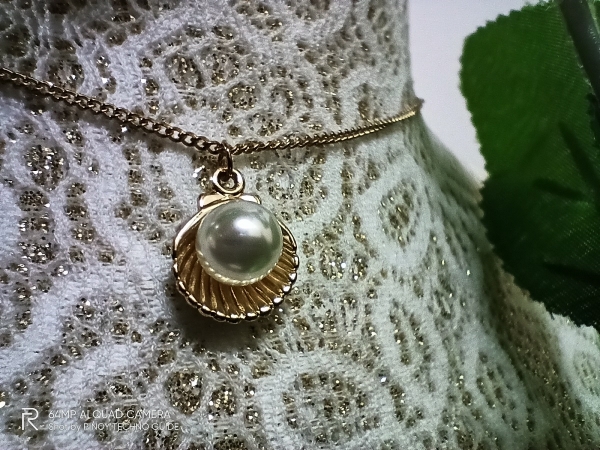 As you can see, the realme 6i can capture decent-looking pictures in good lighting situations. Pictures of different day-time scenes have decent brightness, color saturation, and dynamic range albeit with slight oversharpening.

Ultra-wide pictures also look good with slightly deeper colors but become grainy when zoomed-in. It actually has up to 10x zoom but only the 2x level retains the same quality as the main camera. 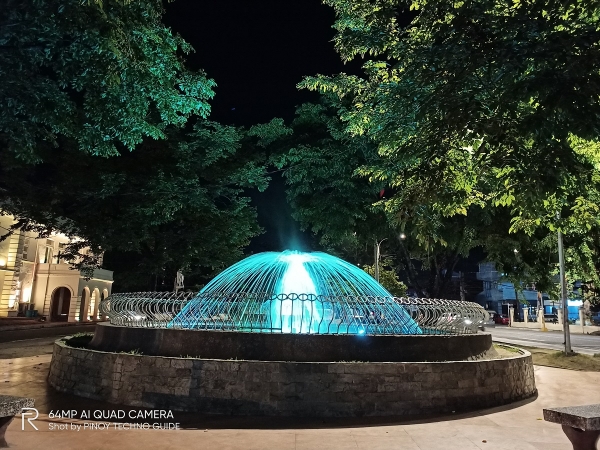 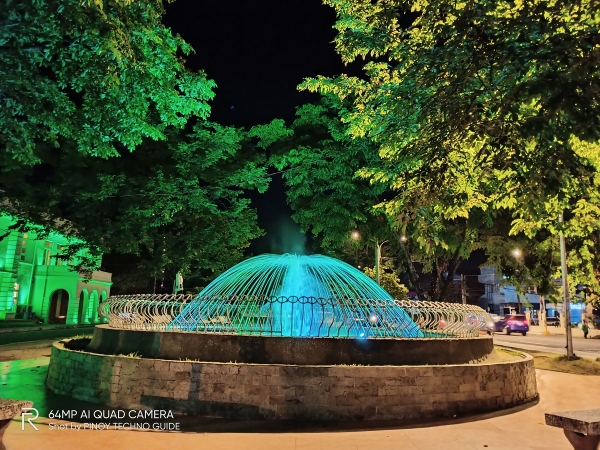 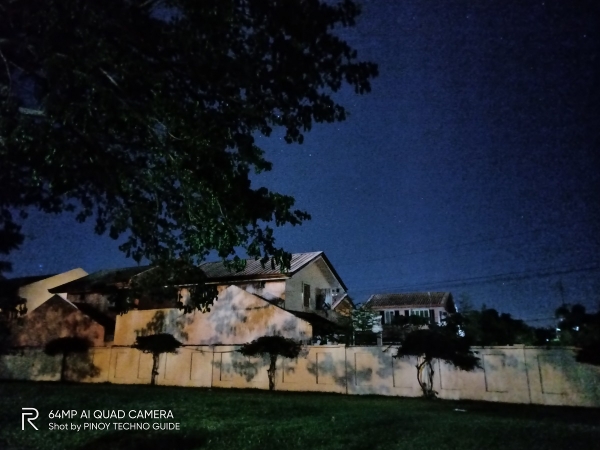 The only disadvantage is it takes a few seconds to shoot pictures making it unsuitable for moving subjects. It also has its limits demonstrated by the last sample picture where it’s just too dark. 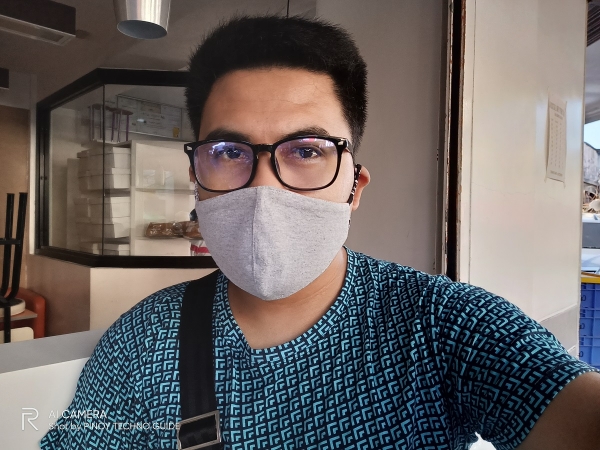 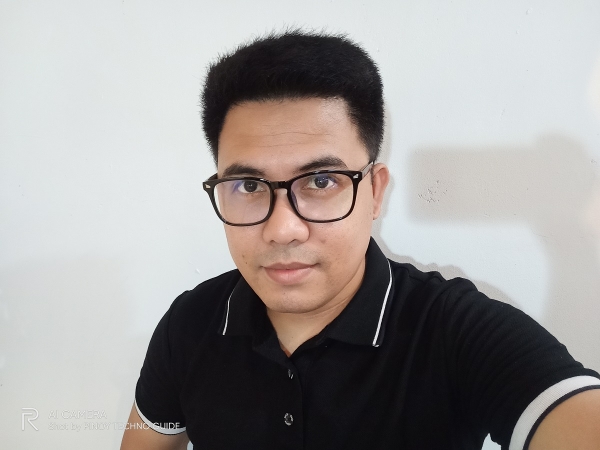 For selfies, the realme 6 has a 16 Megapixel camera that produces good-looking selfies. I’ve always praised realme smartphones for their selfie cameras and this smartphone is no different.

Meanwhile, the rear cameras of the realme 6 can shoot up to 4k videos at 30 fps or 1080p at 60 fps. The video quality is good in well-lit scenes but becomes grainy when the scene dims. 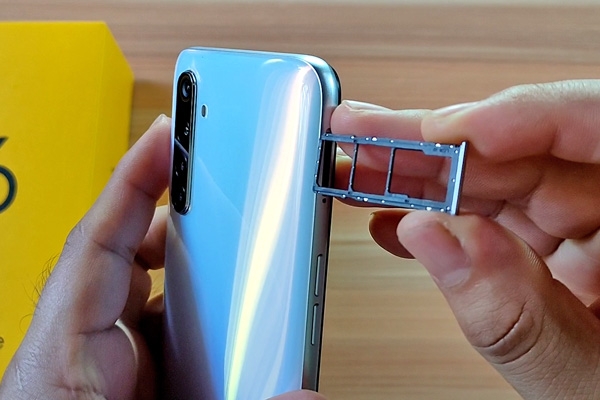 SIM card tray of the realme 6.

The realme 6 is a dual-SIM smartphone with 4G LTE connectivity. It can provide a fast and reliable mobile data connection as long as there is a strong 4G signal in the area.

Voice calls sound good through the phone’s earpiece and its loudspeaker is loud enough for this purpose. However, it’s slightly tinny, lacks bass like most smartphone loudspeakers, and there’s noticeable distortion when listening to music at high volumes. 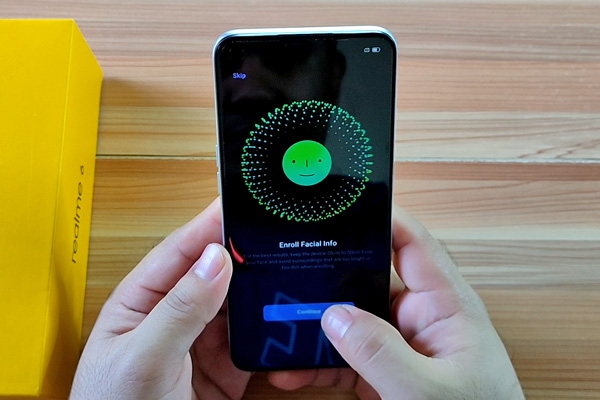 Setting-up face recognition on the realme 6.

The fingerprint scanner embedded on the realme 6’s power button is quick and reliable. It unlocked the device 10 times out of 10 tries.

I also enabled the face unlock feature and it’s more convenient in most cases. However, it’s inherently less secure since it only uses the front camera instead of an array of sensors of FaceID.

All the usual sensors are present in this smartphone including a gyroscope for AR apps. 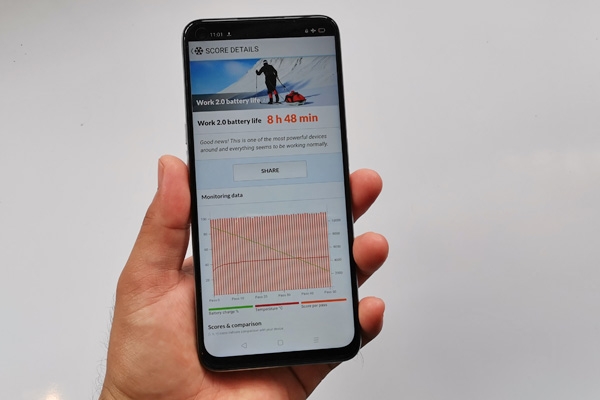 The realme 6 is equipped with a 4,300mAh battery and can last more than one day on a single charge with casual usage.

It scored 8 hours and 48 minutes on the PCMark Battery Life Test 2.0. This is quite a low score when compared to its competitors and likely due to the higher power requirement of the 90hz display.

The test simulates continuous real-world usage such as web browsing and video playback. I always set the screen brightness set to 50% and turn on airplane mode during this test so we can compare it with results from other smartphones that I have reviewed.

Meanwhile, re-charging the battery of the realme 6 from 0% to 100% takes 1 hour and 11 minutes. This is when using the bundled 30W fast charger. 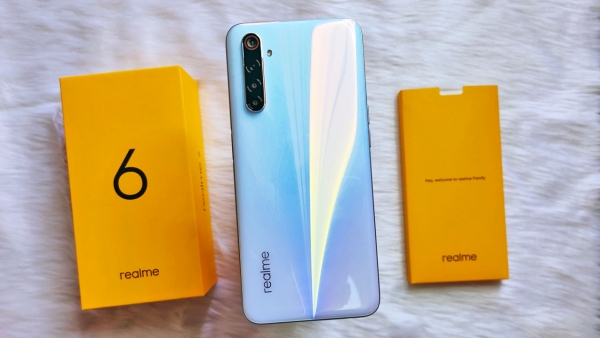 The realme 6 brings many sought-after smartphone features at a price that budget-conscious consumers can afford. These include a 90Hz screen refresh rate, capable gaming hardware, and a 64MP quad-camera system.

I love it when companies strive to provide new features in their products!

Sadly, the battery life of the phone is hit hard by the higher power consumption of the display. The refresh rate can be lowered manually and automatically though.

My recommendation is to choose the realme 6 if you love its features and can live with a slightly shorter battery life. This won’t be a big problem if you can re-charge it every day using its fast charger. 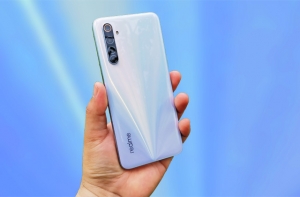