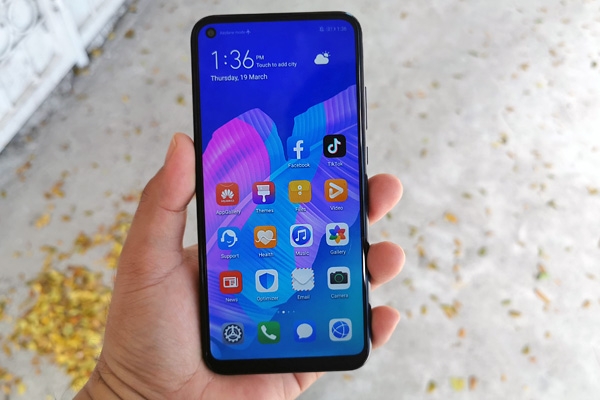 Punch-hole display of the Huawei Y7p.

The most striking design feature of the Huawei Y7p is the optical 2.5D effect on its back panel. This is more apparent on the Aurora Blue color and makes it look like a beveled gemstone when light hits the panel at certain angles.

Apart from that, the device looks like any other modern smartphone. The glossy back houses a fingerprint scanner, triple cameras, and LED flash.

Its volume rocker and power button are on the right side while the triple card tray is accessible on the left side. It has separate slots for two SIM cards and one micro-SD memory card. 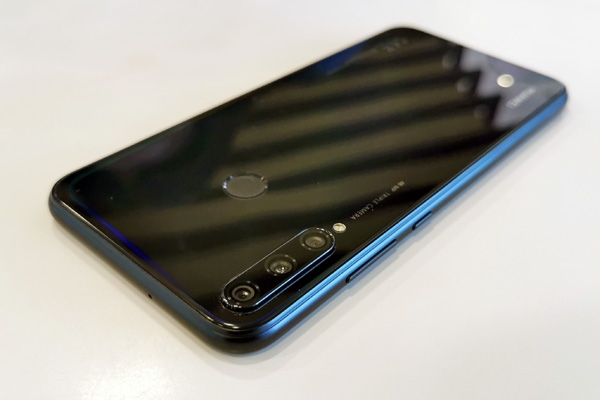 Notice the optical effect around the back of the Huawei Y7p.

However, there’s only a micro-USB port at the bottom instead of the newer USB Type-C. Beside the port are a 3.5mm audio jack and the loudspeaker grille.

The front of the Huawei Y7p is occupied by its 6.39-inch HD+ display with narrow bezels and a punch-hole on the upper left corner for the selfie camera.

Nowadays, I prefer a punch-hole compared to a notch. It makes the device feel more compact and has a better industrial design. However, it’s still a nuisance when it covers certain UI elements in games. 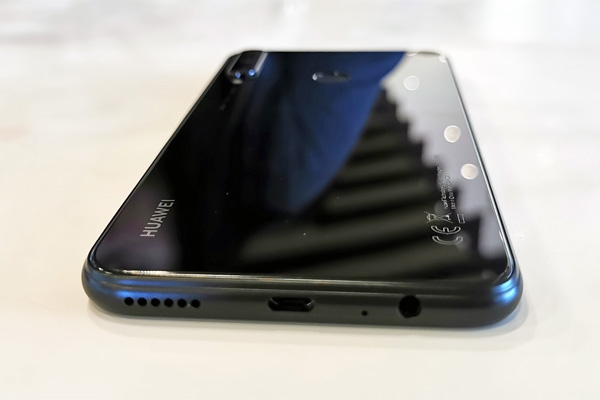 USB port and 3.5mm audio jack of the Huawei Y7p.

The screen itself has decent brightness when used indoors but can be quite hard to use under direct noontime sunlight. Its colors are also acceptable for casual users although there’s no option to make it more vivid in the settings.

Overall, the Huawei Y7p has a great design for a mid-range smartphone. It’s a compact, modern smartphone with enough design embellishments to stand out in a crowd of smartphones.

The Huawei Y7p has triple rear cameras composed of a 48 Megapixel main camera, 8 Megapixel ultra-wide camera, and 2 Megapixel depth sensor. It uses 4-in-1 pixel binning technology and the resulting pictures are 12 Megapixels by default. 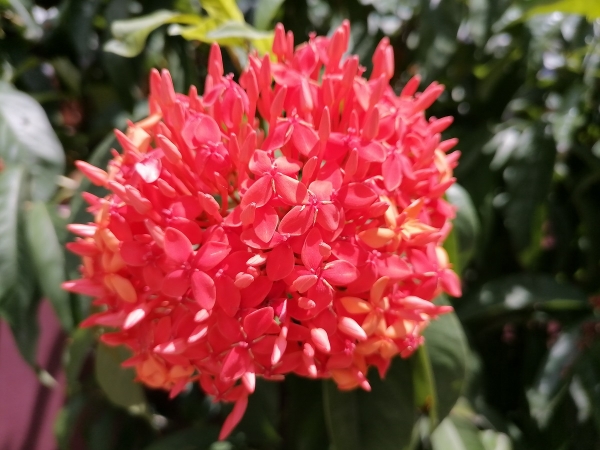 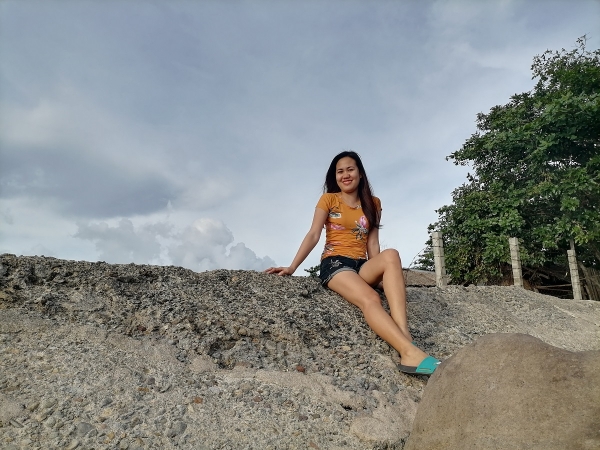 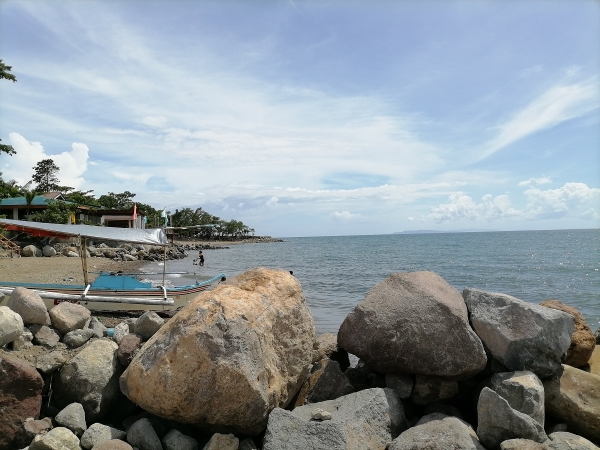 The pictures are sharp with natural-looking colors. Some pictures looked pale when viewed on the phone but turn out alright when viewed on another screen such as a laptop. Turning on the AI feature results in better color saturation.

Meanwhile, the dynamic range of the Huawei Y7p’s cameras isn’t great but the software compensates for it. I took the following picture and the underside of the roof looked dark in the camera preview. 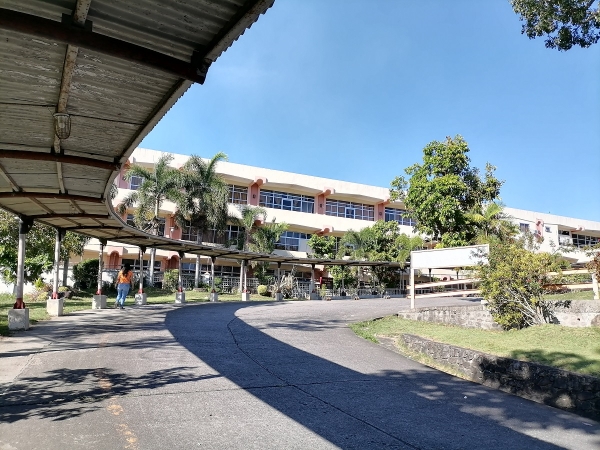 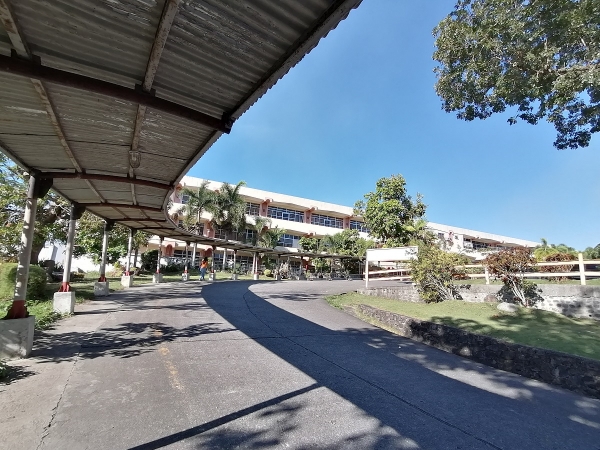 It turned out bright and highly detailed in the final image! This is also the case for the ultra-wide camera and includes a bigger portion of the scene into the image.

However, it has a slightly lower quality than the main camera. Bright areas tend to be overexposed in both cameras too. 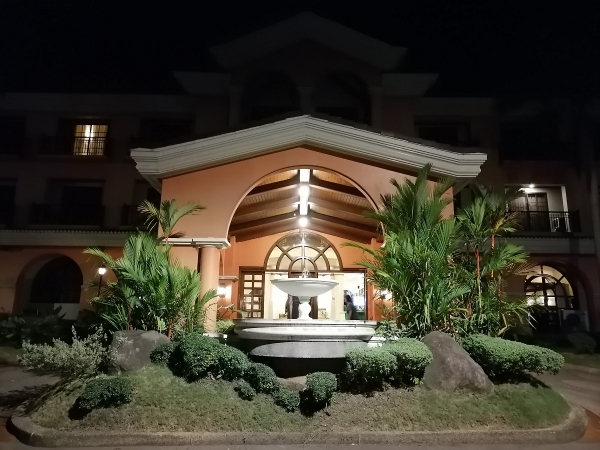 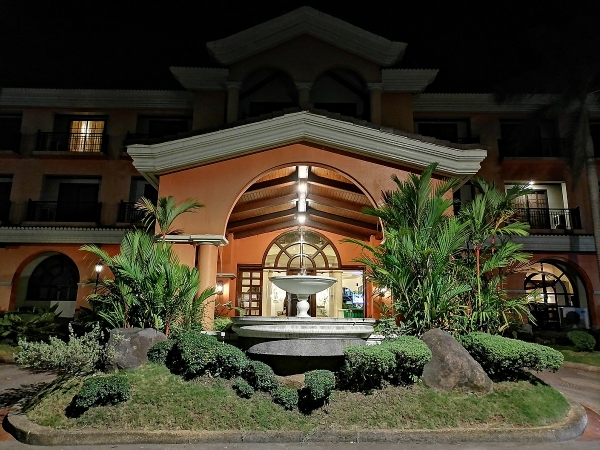 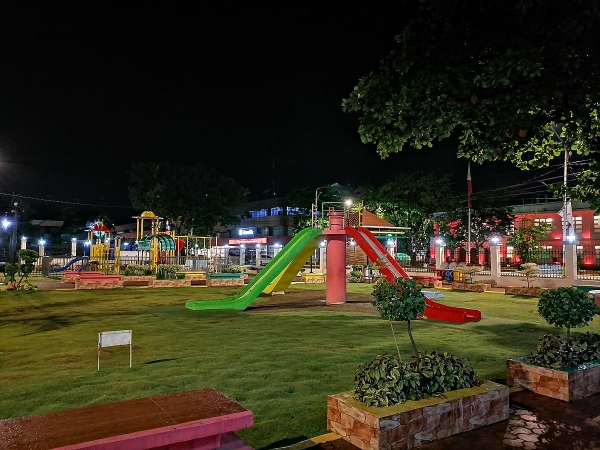 Just like other Huawei smartphones, it comes with a dedicated Night Mode in the camera app. When not enabled, low-light shots look pale and smudgy.

But when turned on, low-light shots come alive with better color saturation, improved sharpness, and increased brightness. It takes a few seconds to capture an image in this mode but it’s worth it. 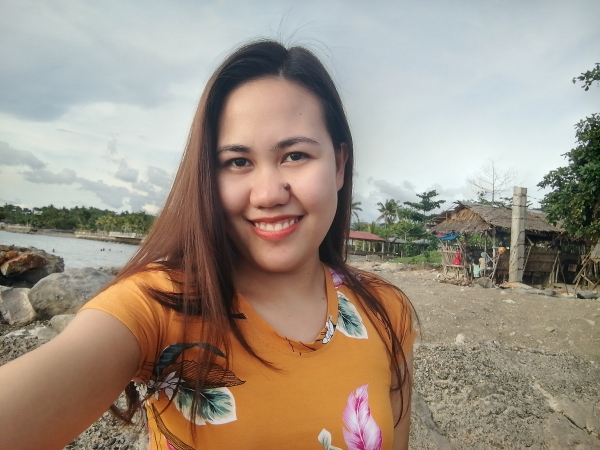 When it comes to selfies, the Huawei Y7p uses an 8 Megapixel snapper housed in the punch-hole of its display.

The selfies look good with good saturation and sharpness when taken at arm’s length. This is one of Huawei’s better selfie cameras that I have reviewed. It’s even better than the pop-up selfie cameras of the Huawei Y9 series! 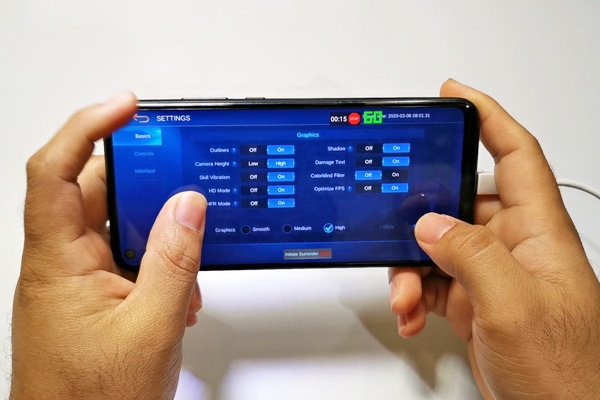 Graphics settings of Mobile Legends on the Huawei Y7p.

The Huawei Y7p is powered by mid-range hardware. It has a Kirin 710F chipset with Mali-G51 graphics processor, and 4GB of RAM.

It can run most of the popular mobile games smoothly at medium graphics quality. Here’s my full Huawei Y7p Gaming Review. 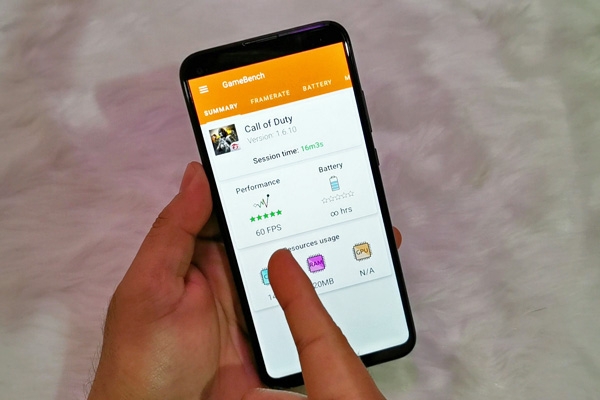 Call of Duty frame rate on the Huawei Y7p.

The device also has a good general performance. Opening apps is quick, scrolling is smooth, and heating is minimal. It still has several stutters though especially when a lot of apps are running in the background.

Let’s compare the performance of the Huawei Y7p with your current smartphone using several benchmarking apps. Install these apps and see if you get higher or lower scores:

Take note that RealPi Benchmark measures the time it takes for the device to compute 1 million digits of Pi or π. Hence, a lower score means the device is faster and performs better. 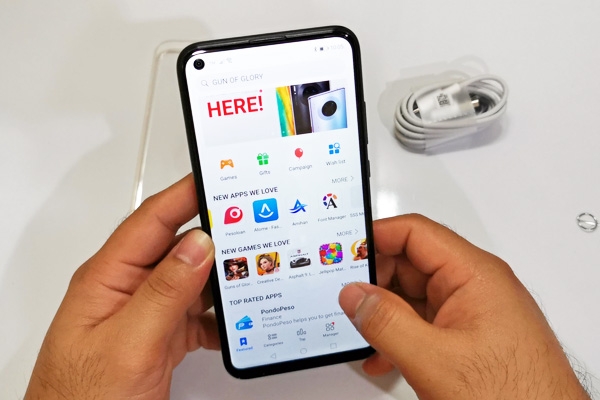 AppGallery on the Huawei Y7p.

Popular apps like Tiktok, GCash, SHAREit, Microsoft Office and others can be downloaded from the AppGallery. However, some social media apps are not yet available.

There are several solutions to this issue. One is downloading these apps from the Amazon AppStore. Facebook, Instagram, Zoom, Facebook Messenger, Spotify, and more apps and games can be downloaded here. 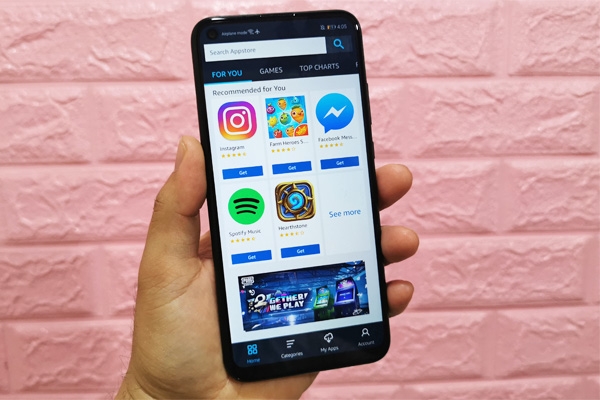 Amazon Appstore has many social media apps for the Huawei Y7p.

Another method of downloading apps is using APK repositories such as APKPure. Apps and games can also be transferred from an old Huawei smartphone to the Huawei Y7p using Huawei’s Phone Clone feature.

The absence of Google apps certainly affects the usage of the phone. I prefer the native Gmail and YouTube apps instead of using another email app and watching videos on the browser.

There is a way to install GMS and Google apps but it won’t be easy for non-tech savvy users. 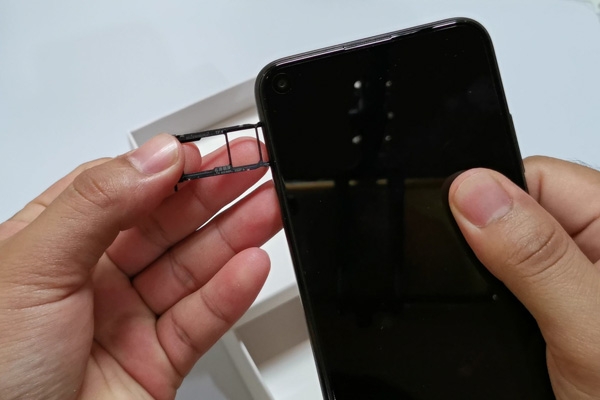 The Huawei Y7p is a dual-SIM smartphone with 4G LTE connectivity. Using mobile data provides a stable and fast internet connection granted that there is a decent cellular signal.

Its Wi-Fi, Bluetooth, and GPS radios also work well. However, it only has a micro-USB port instead of the new USB Type-C standard.

Meanwhile, voice calls sound clear on the phone’s earpiece and the loudspeaker is loud enough. I still prefer listening to music using earphones though. Thankfully, the Huawei Y7p has an analog 3.5mm audio jack. 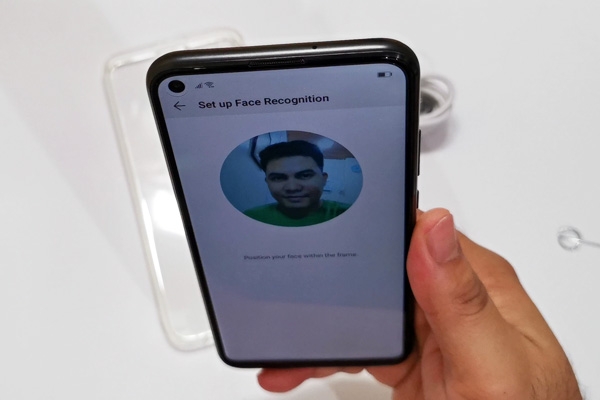 Setting up Face Recognition on the Huawei Y7p.

The Huawei Y7p has 64GB of internal storage with about 52 GB free out of the box. This is enough for several games, videos, pictures, and other files. It can still be expanded up to 512GB using a micro-SD memory card.

It has a fingerprint scanner at the back for security as well as a face recognition feature that uses the front camera.

Both methods are quick in identifying the user but I prefer the fingerprint scanner since it works well both during the day time and at night. 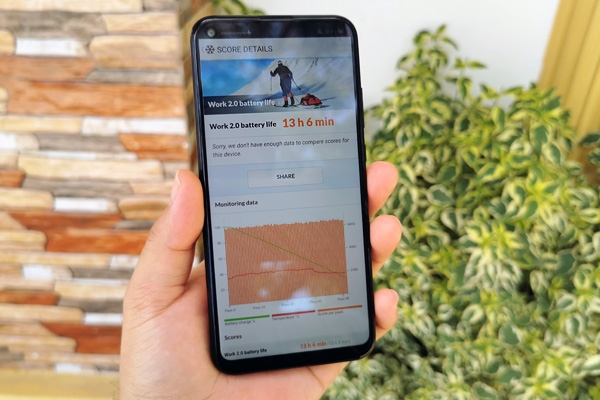 A 4,000mAh battery powers the Huawei Y7p. It can last around 1 day and a half when used casually with some gaming, picture-taking, social media browsing, and messaging.

A more objective way of measuring the phone’s battery life is using the PCMark Battery Life Test 2.0. I always test smartphones at 50% screen brightness and airplane mode enabled. The Huawei Y7p got a score of 13 hours and 6 minutes which is average.

Meanwhile, the device supports a charging power of up to 5V at 2A or 10 watts. It takes 2 hours to recharge it from 0% to 100% battery life. 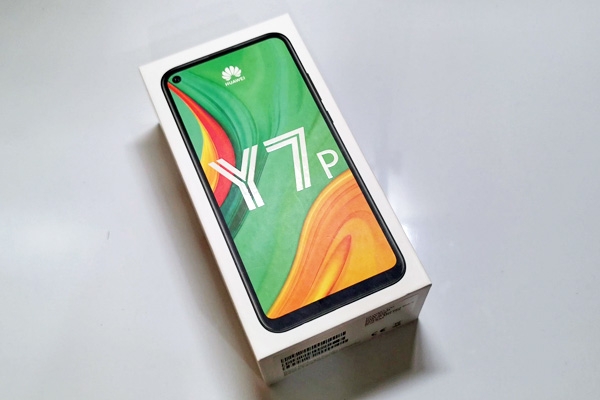 I’m split between recommending the Huawei Y7p smartphone or not. On one hand, it has a capable set of features from the cameras, processor, and battery. On the other hand, the lack of GMS is a big deal for most smartphone users in the country.

If you can live without Google apps, the device is a great deal. You can also check if you know someone who can side-load GMS for you. Otherwise, you’ll have to use alternative apps and services.

A good alternative for the Huawei Y7p is the Huawei Y9s which comes with the same processor and cameras but with the selfie camera being the pop-up motorized type. It costs ₱3,000 more though. 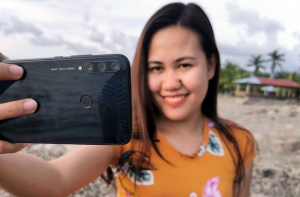 The Huawei Y7p has a good gaming performance, camera quality, and battery life.