The Huawei Y9s uses the same processor as last year’s Huawei Y9 Prime 2019 – the Kirin 710F. However, it has more RAM at 6GB compared to the later’s 4GB RAM.

Hence, I expect this smartphone to be slightly faster in terms of gaming performance and benchmark scores. Let’s check the framerate of several games first before running the benchmarking apps. 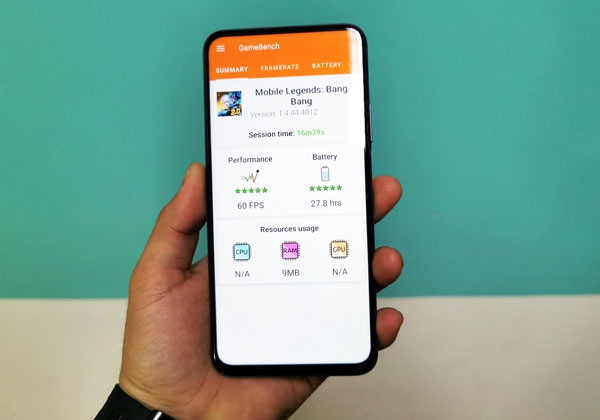 Gaming test results of Mobile Legends on the Huawei Y9s.

I installed the latest version of Mobile Legends: Bang Bang on the Huawei Y9s and set its graphics quality to High. Shadow, character outline and HFR mode are also turned on.

The average framerate is measured by GameBench Pro during a Classic game.

After 16 minutes and 39 seconds, the resulting average framerate is a perfect 60 FPS! There are a few instances where the framerate dropped to around 55 FPS with 98% stability.

Since the duration of the test is more than 15 minutes, GameBench Pro also estimated that the device will last a total of 27.8 hours of playing Mobile Legends. That’s more than a whole day! 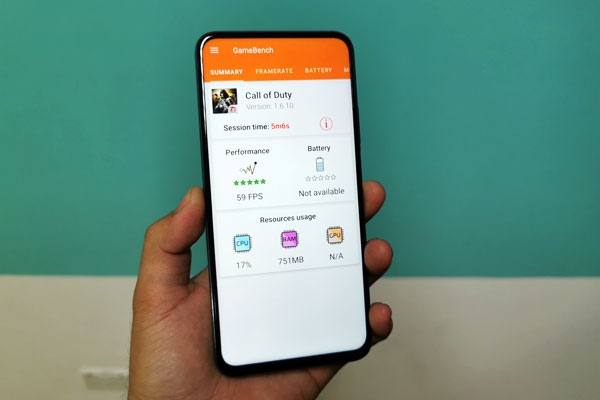 Gaming test results of Call of Duty Gaming Mobile on the Huawei Y9s.

Call of Duty Mobile is a more resource-intensive game compared to Mobile Legends. Nevertheless, the Huawei Y9s still got 59 FPS of average framerate after a Frontline match.

However, the graphics quality of Call of Duty is automatically set to Low. The Medium and High options are disabled by the game.

The test only lasted 5 minutes and 6 seconds. Hence, GameBench Pro didn’t have an estimate of the smartphone’s battery life. 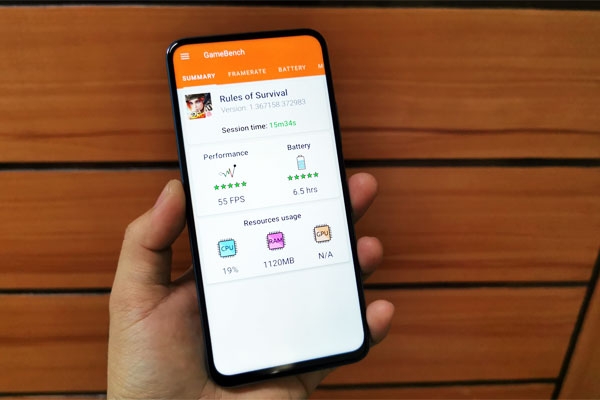 Gaming test results of Rules of Survival on the Huawei Y9s.

Rules of Survival is another resource-intensive game but unlike Call of Duty, it allows the user to set the graphics quality to the maximum settings irrespective of the smartphone model and hardware.

I played a Ranked game and set the graphics quality to Excellent. GameBench Pro measured the average framerate at 55 FPS! This is better than the performance of its predecessor, the Huawei Y9 Prime 2019, with its 49 FPS score for the same game and graphics quality.

My character was still alive after 15 minutes of playing so GameBench Pro had an estimated battery life of 6.5 hours.

Here are the results of the gaming tests of the Huawei Y9s including the graphics settings:

For more ways to compare the Huawei Y9s with other smartphones, I installed several benchmarking apps on the device and tested its performance. These tests were performed without turning on the Performance Mode since most users won’t be doing that.

Here are the scores: 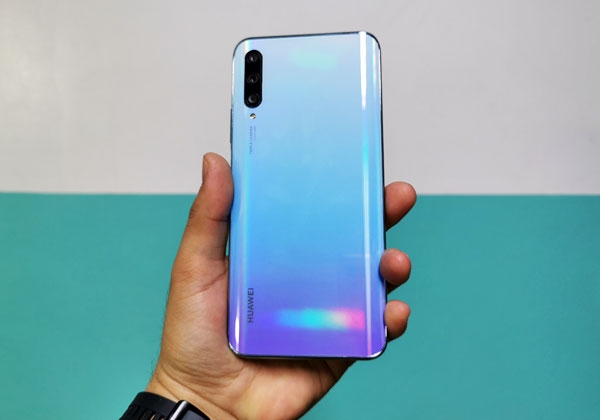 The Huawei Y9s is capable of running popular games smoothly. For games similar to Mobile Legends, the graphics quality can be set to the maximum while other games more akin to Call of Duty Mobile and Rules of Survival should be played in Medium graphics quality.

Another factor that makes the Huawei Y9s a good gaming smartphone is its FullView display. It’s a large 6.59-inch FHD+ display that has no notch nor cutout.

Use our comparison tool to compare the Huawei Y9s with other smartphones.

UP NEXT: Huawei Y9s Full Review!