The S Pen stylus that comes with the newly unveiled Samsung Galaxy Note 9 has remote control functions thanks to Bluetooth Low Energy Technology.

With a click, double click or long press on the S Pen’s button, the Note 9 can take a picture, play videos or switch to the next slide of a PowerPoint presentation!

As its name suggests, Bluetooth Low Energy or BLE is a wireless connectivity technology that uses minimal power. The S Pen doesn’t even have a traditional battery. Instead, it uses a Super Capacitor that charges in just 40 seconds to provide up to 30 minutes of usage.

The moment it’s removed from the Note 9, the S Pen instantly connects with its mother phone even if Bluetooth isn’t turned on. 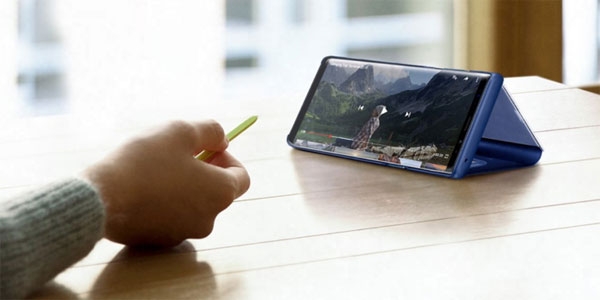 All of S Pen’s remote control functions can be customized in its Settings. A long press is preset to open the Camera but it can also be assigned to another app.

Other apps can also harness these functions and developers can apply it once Samsung releases the software development kit or SDK.

S Pen functions that have been available in previous Note versions are still supported and doesn’t use power from the Super Capacitor.

It can be used to write, draw and navigate the screen just like before.