The MyPhone myX8 has an interesting mix of features including an 18:9 display and a massive 4000mAh battery.

I went ahead and got a gold color variant of the device to unbox and review. Let’s see if this is the smartphone that fans of the Filipino brand have been waiting for. 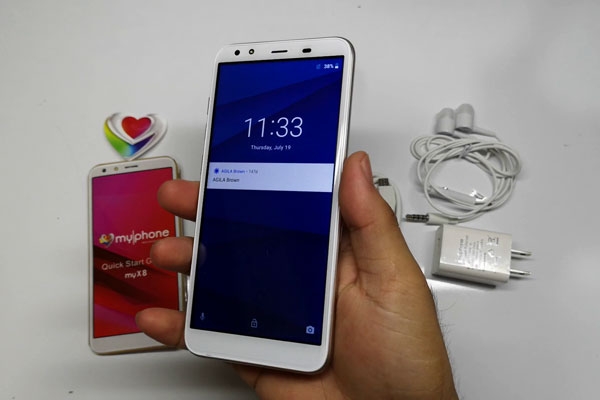 The MyPhone myX8 comes in a standard cardboard box with its key features printed on the side. The same features are also printed on a protective film applied on the front of the device. Peel it off and you’ll notice that a screen protector is already pre-installed.

Aside from the smartphone itself, the box also contains earphones, a micro-USB cord and a power adaptor with a rated output of 5V/1.5A. I wonder how long this takes to fully charge the large battery. We’ll find out in the full review.

Underneath the accessories is a quick start guide with helpful tips for using the smartphone. The last item inside the box is a sticker of MyPhone’s heart-shaped logo.

Hands-on with the MyPhone myX8 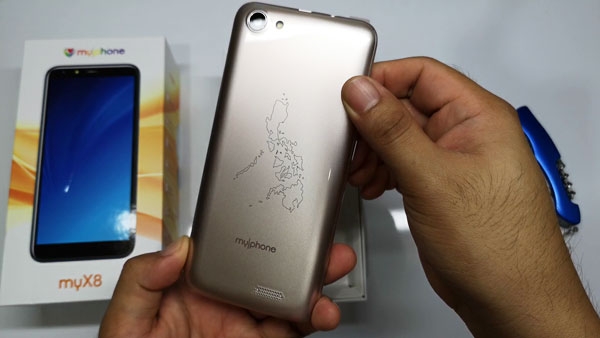 It has the Philippine map…

The MyPhone myX8 has a plastic body but the build quality I expect with MyPhone’s smartphones is present. It feels sturdy to hold with a reassuring heft and the tall display adds a modern look.

It has a map of the Philippines on the back cover which can be good or bad depending on your personal preference. Thankfully, it’s only an outline and less conspicuous than previous models.

Its back cover can also be removed to reveal the microSD card slot, battery, and two nano-SIM card slots. However, the battery is screwed in place for safety reasons.

Turning on the MyPhone myX8 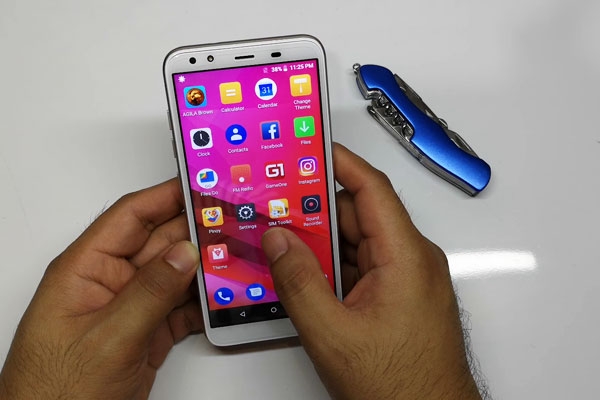 You can see some of the pre-installed apps.

Upon turning on the MyPhone myX8, a user registration form appears. This can be filled up or bypassed by tapping the MyPhone logo several times.

It’s worth noting that the device runs on the regular version of Android Oreo and not the Go Edition. Hence, it comes with the full-fledged Google apps, not the lite versions.

However, there are several pre-installed apps from MyPhone including the Pinoy app, Agila, and Brown&Proud portal. These apps can’t be uninstalled but I end up disabling the Agila app because it adds a second lock screen as well as a persistent notification.

There’s around 10GB of free storage space on the device and the performance in swiping across the screen and opening apps seem decent for its price.

I’ll have to test the MyPhone myX8 further including its camera quality, gaming performance and battery life in the full review.

UP NEXT: MyPhone myX8 Full Review!