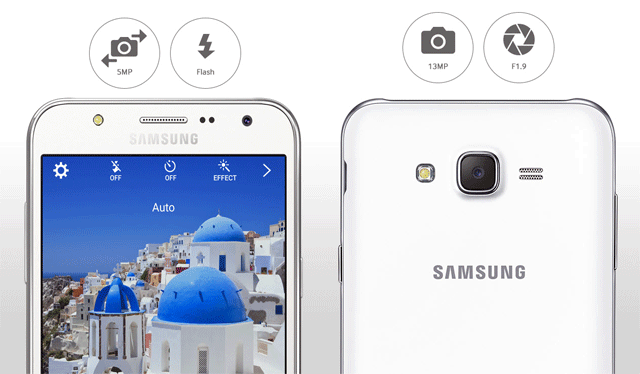 Samsung Philippines has finally made the selfie-centric Galaxy J5 and Galaxy J7 available here in the Philippines carrying a ₱9,990.00 price tag.

It boasts a 5MP front camera with its own dedicated LED flash accompanied by decent specs. What’s interesting though is its unusual amount of RAM at one and a half gigabytes.

The Samsung Galaxy J5 has all the usual Samsung goodies such as a Super AMOLED display measuring 5-inches with HD resolution and TouchWiz skin on top of Android Lollipop.

It runs on a quad core processor running at 1.2GHz and has 3G connectivity. There’s 8GB of built-in storage which is expandable up to 128GB.

A 13MP camera at the back with f/1.9 aperture ensures high quality pictures at low light. USB OTG and GLONASS assisted GPS positioning are supported too.

It has a 2,600mAh Lithium-ion battery, FM Radio receiver with RDS, two SIM cards and a 7.9mm thick polycarbonate body.

Update: Samsung has confirmed that the Galaxy J5 doesn’t have 4G LTE connectivity and only has 8GB of built-in storage. Thank you anonymous reader!