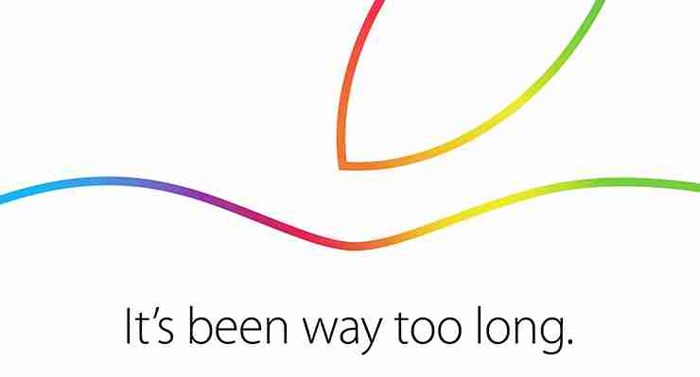 Apple Inc. is set to unveil new iPads on October 16, 2014 including a thinner iPad Air 2 and possibly, an iPad Mini 3.

The company already sent out invitations with the phrase, “It’s been way too long” as the only clue to what it has to offer. However, most of the details about the new iPads were already leaked.

Here’s the invitation for the event: The Apple iPad Air 2 is expected to have a 7mm profile – 0.5mm thinner than the first iPad Air. Furthermore, it will use the new A8 processor that we’ve seen on the iPhone 6 with an M8 co-processor and 2GB of RAM.

It will also feature a TouchID fingerprint sensor on the home button and better cameras at 8MP from the previous 5MP while the front camera is now able to capture 720p videos.

The Apple iPad Mini 3 is also expected to come with similar features but of course, with the smaller display. Both tablets will also run on iOS 8 out of the box with Apple Pay. Aside from the new iPads, Apple is also expected to unveil a new lineup of iMacs with higher resolution displays including one with a 5K display.

Are you excited with what apple has in store for us next Thursday?