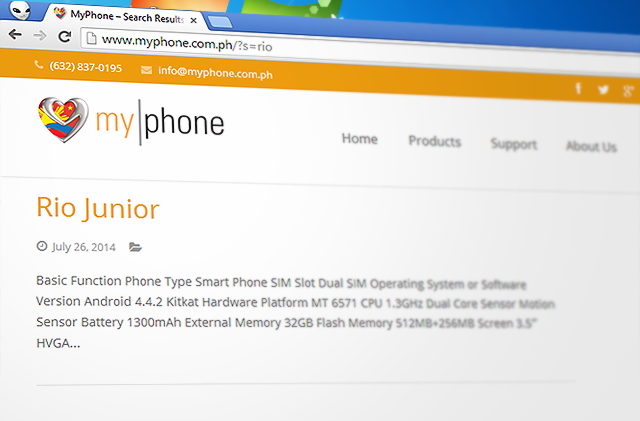 If you search for the keyword ‘Rio’ on MyPhone’s official website, you’ll find two new variants of MyPhone Rio – the LTE and Junior.

MyPhone Rio Junior has the ‘lowest-end’ specs among the Rio variants – even lower than the MyPhone Rio Craze. Nevertheless, it’s still a dual core smartphone boasting an out of the box Android 4.4 Kitkat experience!

MyPhone Rio Junior is powered by a 1.3GHz MediaTek MT6571 processor coupled with a Mali-400 MP graphics processor. Just like the Rio Craze, these and its Android Kitkat OS will make it run basic functions like texting smoothly.

However, it only has 256MB of RAM and 512MB of internal storage. Installing additional apps and running background processes will be problematic.

MyPhone Rio Junior a slot for up to a 32GB microSD card and dual SIM support but it can only connect to 2G networks. If you want to browse the internet, you’re better off connecting to a Wi-Fi network.

As its name implies, MyPhone Rio Junior has the smallest screen among Rio variants – a 3.5-inch capacitive display with a resolution of 480 x 320 pixels only.

It also has a 1.3MP rear camera but lacks a front shooter. It doesn’t have a proximity and ambient light sensor too so the screen will stay on if you place it next to your ear to take a call.

The battery is listed as 1,300mAh but the price is nowhere to be found. Based on the slightly higher spec’d MyPhone Rio Craze, the Rio Junior might have an SRP around ₱1,500.