I’ve been using the Samsung Galaxy S10 smartphone for almost a month now. It’s a premium, compact and highly capable device fitting for the tenth anniversary of Samsung’s Galaxy S Series of smartphones.

However, it still has several quirks including a punch-hole for the selfie camera. Here’s my full review of the Samsung Galaxy S10 with its advantages and disadvantages! 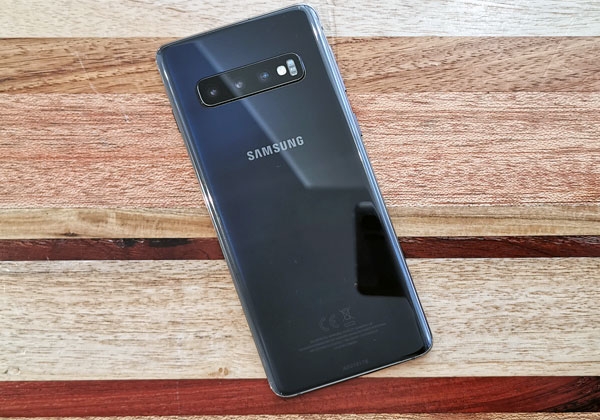 The back of the Samsung Galaxy S10.

The Samsung Galaxy S10 has curved glass both on the front and at the back while its sides are metal. It looks truly premium and feels sleek when held.

At the back, its triple rear cameras are neatly arranged in a horizontal module together with the LED flash and several sensors. It’s perfectly balanced and doesn’t rock when used while laying on a table top.

On the left side are the volume buttons and Bixby button. Yes, the Bixby button can now be changed to open another app by going to Settings > Advanced features > Bixby key. However, the power button is placed a bit too high on the right side. 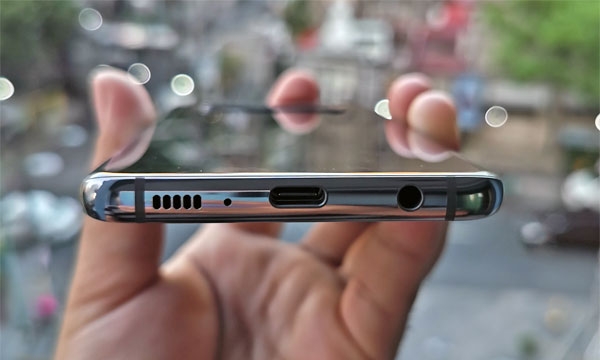 At the top, there’s the SIM card tray together with a microphone while the bottom of the phone has the loudspeaker, USB Type-C port, 3.5mm audio jack (YES!) and another microphone.

On the front, the 6.1-inch display almost occupies the entirety of the phone. There’s a very tiny chin at the bottom while the top only has space for the tiny strip of the earpiece grille. Let’s talk about the punch-hole in the next section. 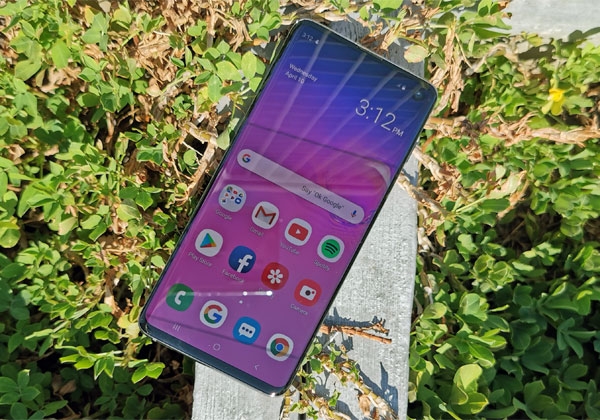 This is how the Samsung Galaxy S10’s display looks like during a bright sunny day.

The 6.1-inch Dynamic AMOLED display of the Samsung Galaxy S10 has vivid colors, deep blacks and very low latency in its touch response. The company has been making the best displays in the industry!

It can also go very bright for outdoor use. Although, the brightness slider turns to orange as a warning that having the brightness too high can have a negative impact on battery life.

Perhaps the most interesting feature of this display is its punch-hole for the selfie camera. Yes, it’s less distracting compared to a big notch and can be incorporated in creative wallpapers designs.

However, the curved edges of the phone is still prone to accidental touches.

Samsung added new display technologies including HDR10+ that further improves media consumption. There are also several options in the Settings including a Night mode which is a dark theme, Blue light filter and some Edge screen features. 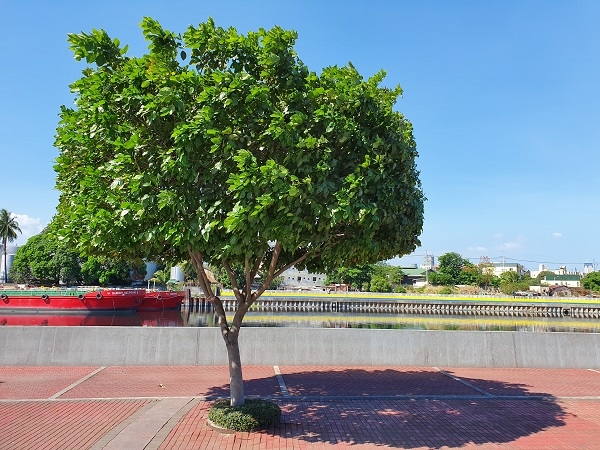 The Samsung Galaxy S10 is equipped with a triple rear camera array. It’s composed of a 12 Megapixel main camera, another 12 Megapixel telephoto camera and an 8 Megapixel ultra-wide camera.

The main camera has variable aperture and can adapt to bright or low light environments by making the opening of its lens bigger or smaller. This is done by the smartphone automatically but the user can also mess with a lot of options in the Pro mode. 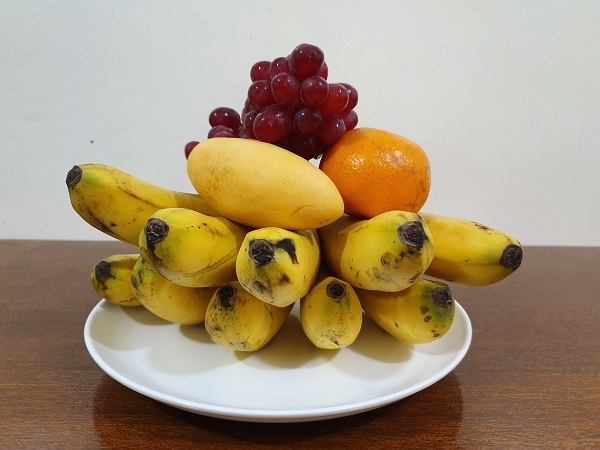 As you can see in the sample pictures above, pictures shot using the Samsung Galaxy S10 in bright environments have vivid colors, sharp details and great dynamic range. It can produce great pictures even if used simply as a “point and shoot” camera. 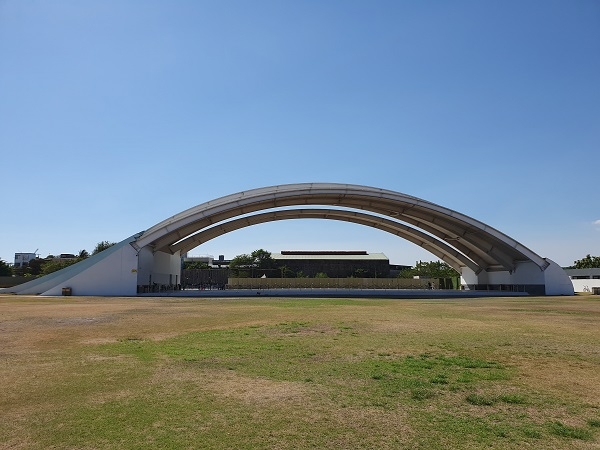 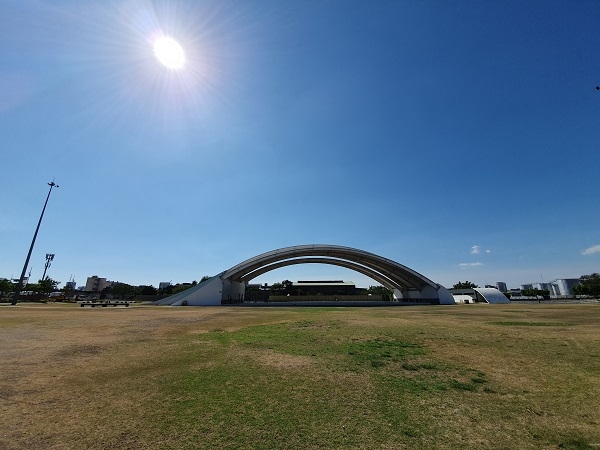 The ultra-wide camera provides an expansive view. It can fit more of the scene in the image but with a bit of distortion. This feature is useful in shooting landscapes as well as when taking pictures inside a small room. 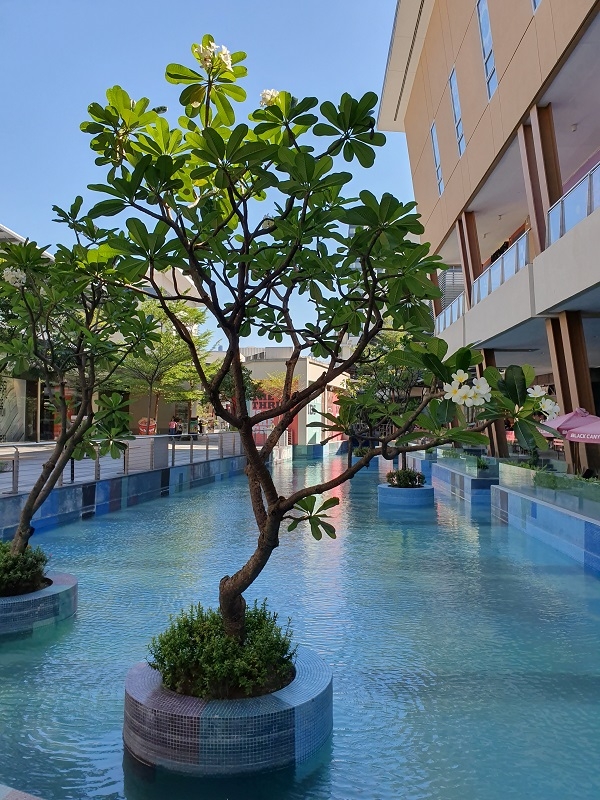 In the picture above, there’s a bit of backlight from the afternoon sun but the phone automatically turned on HDR. This preserved the details in the shadows and still made the colors accurate. 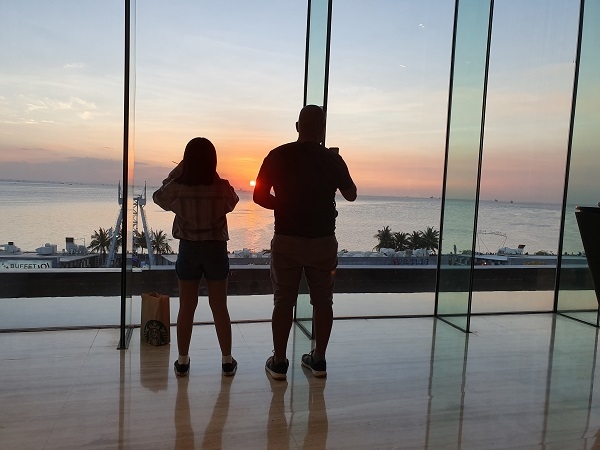 A sunset is also another great subject for the Samsung Galaxy S10. I wasn’t able to line up the horizon in the sample picture above that’s why it looks a bit weird. 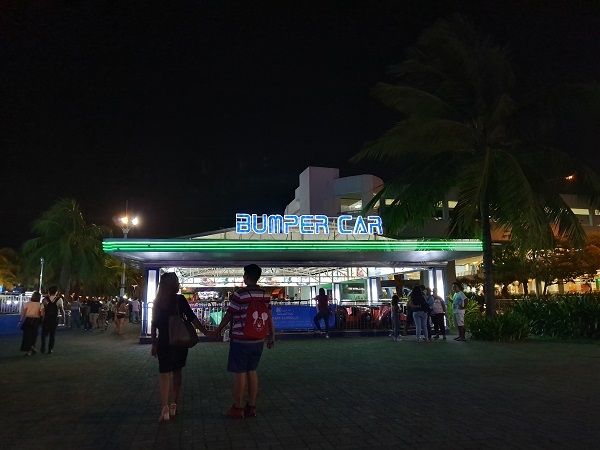 Night time pictures can look good although there’s a slight reduction in quality. The Scene Optimizer improves the quality a bit. A software update will add a “Bright Night” shooting mode on the phone’s camera app. 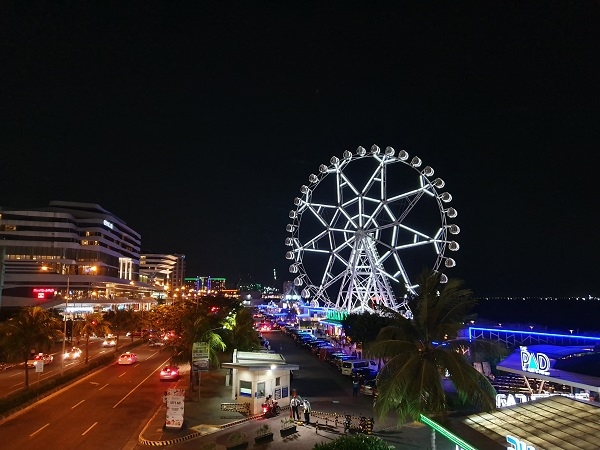 It can also shoot impressive videos up to 4K resolution and 60 frames per second!

The Samsung Galaxy S10 has a single 10 Megapixel selfie camera. This means that the punch-hole on the screen is a perfect circle instead of the wider punch hole in the Galaxy S10+.

Selfies have well-balanced skin tone and sharp details since the camera has autofocus. There are also several beautification options, blurred background effect and built-in filters.

Here are some sample selfies: 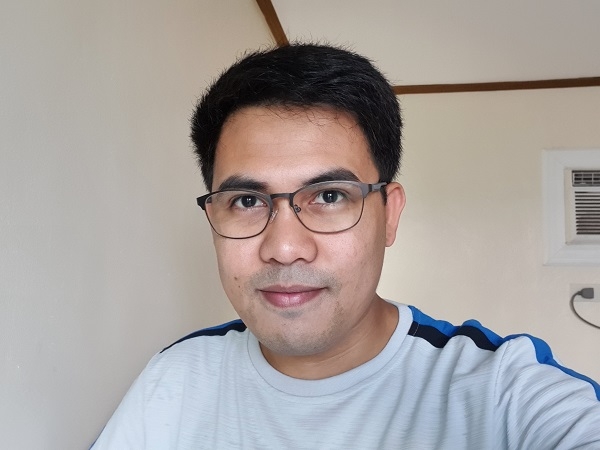 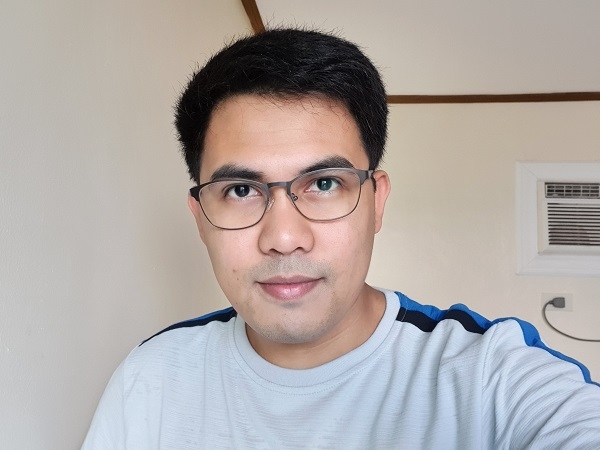 OneUI makes navigation in a tall display easier and more intuitive. The icons can seem a bit too cartoonish and oversized but that also make them easier to tap.

Opening apps, swiping across home screens and navigating through the Settings are virtually lag free. Samsung has successfully revamped their software to something light and pragmatic.

I’m not a fan of having Bixby when the user swipes to the left on the homescreen though.

The Samsung Galaxy S10 is powered by an Exynos 9820 chipset with a 2.7GHz octa-core CPU, 8GB of RAM and Android 9.0 Pie operating system.

Here are the Antutu Benchmark score of the Samsung Galaxy S10 compared to its main competitors:

I’ve tested its gaming performance with two of the most demanding Android games – Mobile Legends and PUBG Mobile.

After playing these games, the phone’s battery temperature did not reach 42 degrees Celcius. However, I could feel a its back getting a bit warm.

The Samsung Galaxy S10 is a powerful gaming smartphone but some software tweaks might be needed for better thermal management. Take note that this is for the Exynos variant of the device, not the Snapdragon-powered version. 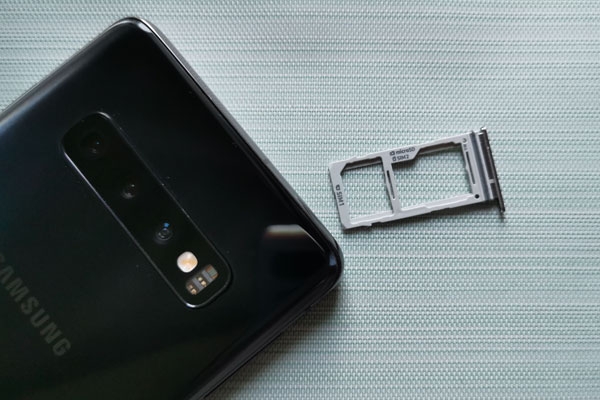 The Samsung Galaxy S10 is a dual SIM smartphone with two nano SIM card slots that can connect to 4G LTE networks. Internet speed is fast for both mobile data and Wi-Fi networks.

It can also be connected to an external monitor for its desktop mode called DeX. A USB Type-C to HDMI cable or adapter is needed for this feature.

Meanwhile, the phone’s loudspeaker has decent sound quality. It can get very loud for a tiny speaker at full volume although the audio quality suffers a bit.

The sweet spot is at around 90% volume. There’s a small hint of bass and the overall audio sounds full thanks to the earpiece acting as a stereo pair.

Pressing my thumb on the screen for unlocking is more intuitive and it doesn’t emit a bright light since it uses ultrasound. However, it’s still not as fast as traditional fingerprint sensors.

Meanwhile, the phone’s face recognition feature only uses the 10 Megapixel selfie camera to identify the user’s face. It’s fast but not as secure as FaceID. Nevertheless, I wasn’t able to unlock the device using my picture.

Aside from these, the Samsung Galaxy S10 also has several additional sensors including a heart rate monitor. The user simply has to place a finger at the sensor located below the LED flash to measure heart rate. 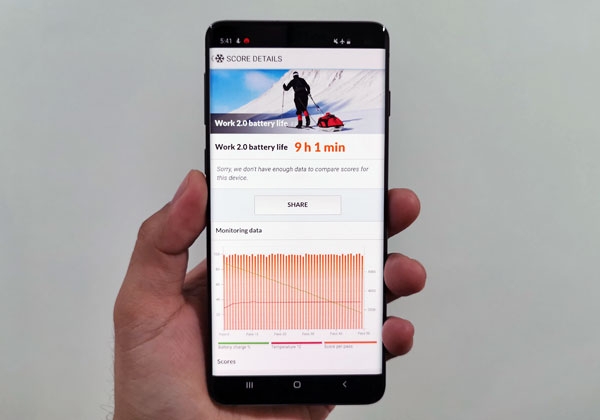 The Samsung Galaxy S10 is powered by a 3400mAh battery. It can easily last an entire day on a single charge with mixed usage.

I got a screen on time of 5 hours and 10 minutes based on a one week measurement by AccuBattery. It also got 9 hours and 1 minute on PCMark’s Battery Life Test.

Samsung Galaxy S10 battery life as measured by AccuBattery based on my usage.

Meanwhile, charging the Samsung Galaxy S10 from 0% to 100% battery capacity takes around 1 hour and 35 minutes using its bundled charger.

It’s smaller than the Galalxy S10+ but with very similar set of features. It has the same cameras, display technology and processor.

Indeed, the Samsung Galaxy S10 is a premium, compact and highly capable device fitting for the tenth anniversary of Samsung’s Galaxy S Series of smartphones. 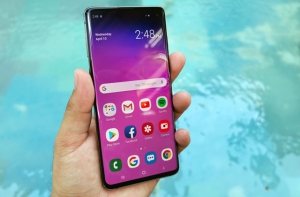 The Samsung Galaxy S10 is a a premium, compact and highly capable smartphone.