BY Daniel Gubalane ON Apr 13, 2021 WITH 46 Shares
The realme Watch S Pro looks great when worn in the beach.

The realme Watch S Pro is currently the most premium smartwatch from tech and lifestyle brand realme.

It boasts a circular AMOLED display, stainless steel case, 14-day battery life, and a myriad of features for health and sports tracking. I’ve been using the device for several weeks and here are my thoughts and observations.

What I like about the realme Watch S Pro:

What I dislike about the realme Watch S Pro: 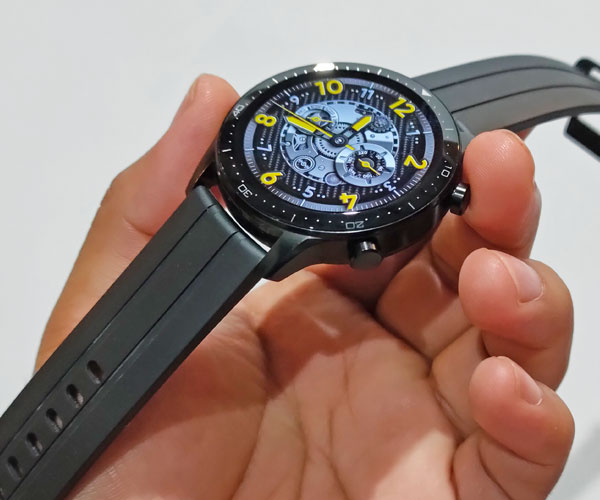 The realme Watch S Pro has a circular display and two physical buttons.

There are two physical push buttons on its right side. The first button turns on and off the display or the entire watch when long-pressed and returns the user to the home screen from any app.

Meanwhile, the second button serves as a shortcut for sports and workout functions. The functions of these buttons are not customizable though. 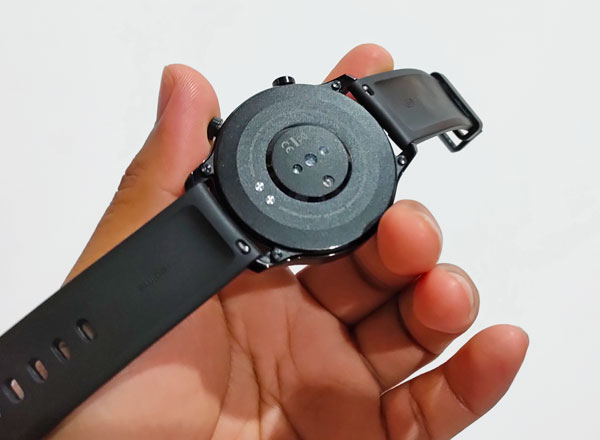 These are the underside sensors of the realme Watch S Pro.

On the underside of the case are several sensors and charging pins. The sensors are housed in a slightly raised module to ensure contact with the wrist.

The watch weighs 63.5 grams only and feels comfortable when worn for an entire day or overnight. There are also replacement straps available separately including stainless steel and leather options for more formal occasions.

Overall, the realme Watch S Pro has a mature design made to look premium. It looks best when worn during sports activities but won’t look out of place in formal scenes while still tracking the user’s health and fitness stats. 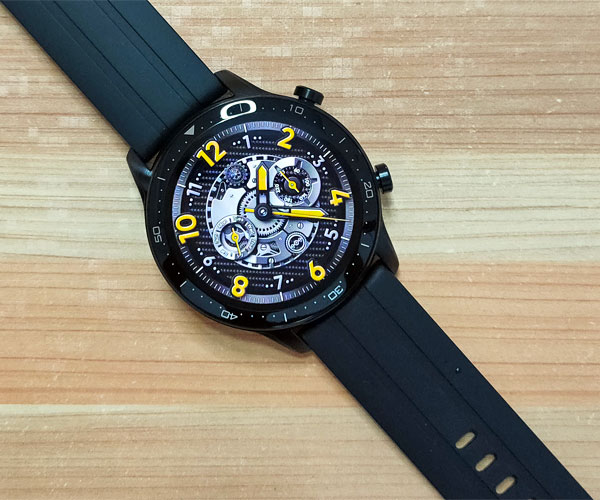 This is the default watch face design of the realme Watch S Pro.

The realme Watch S Pro has a 1.39-inch AMOLED display with a pixel density of 326 PPI. It looks as sharp as high-end smartphone screens and very responsive to swipes and touches.

Swiping from the left reveals some quick shortcuts including the raise-to-wake function and brightness level of the display. It’s best left in Auto since the watch is smart enough to max out the screen brightness outdoors and turn it down at night. 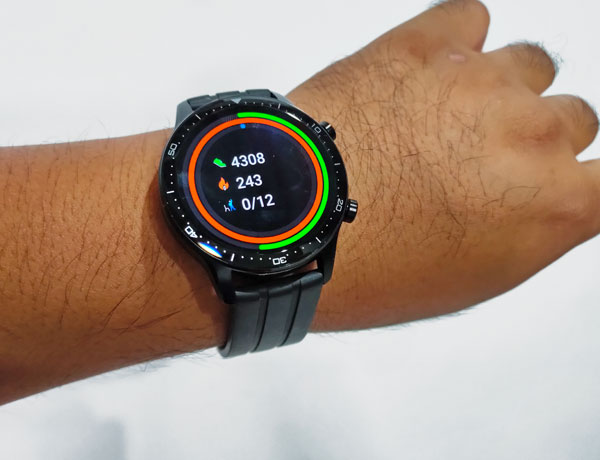 On the other hand, swiping from the right side reveals the activity tracker, weather update, sleep record, heart rate monitor, and music controls. Swiping down opens the notifications and swiping up brings up the app drawer.

The watch runs on a proprietary operating system so there’s no way of adding third-party apps unlike those that run on Android Watch.

Some notable apps include the compass, SpO2 monitor, camera shutter function, and Phone finder. When an app is open, swiping from the left serves as the “back” function. 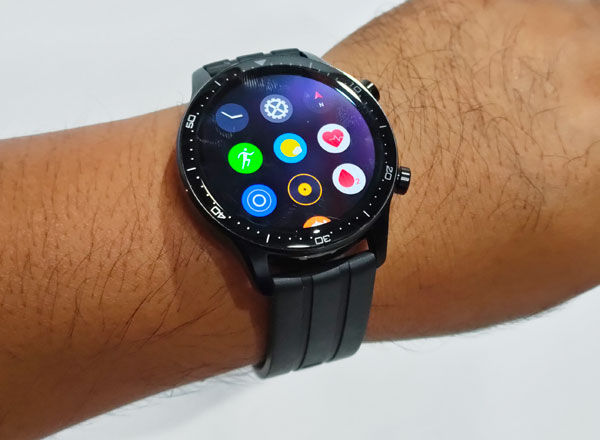 There are also several watch face designs to choose from. Nine designs are available when the home screen is long pressed and more can be accessed through the realme Link app. It can even be customized with the user’s own image although I still find it hard to find a design that suits my tastes.

An Always-On-Display feature shows a simpler watch face after a few seconds of inactivity. Hence, the time is always available at a glance.

A “dual processor” powers the realme Watch S Pro. Opening apps or notifications and switching from one screen to another are smooth. It doesn’t have lagging issues that haunt some smartwatches.

It pairs with a smartphone via an app called realme Link. It’s available for download at the Google Playstore and Apple Appstore.

When paired successfully, the watch can receive notifications from the smartphone. These include calls, texts messages, and whatever app the user selects in the realme Link app. It doesn’t support replies though.

It can also be used as a shutter button for the phone’s camera and control music playback. The latter supports the native music app as well as Spotify and YouTube Music. 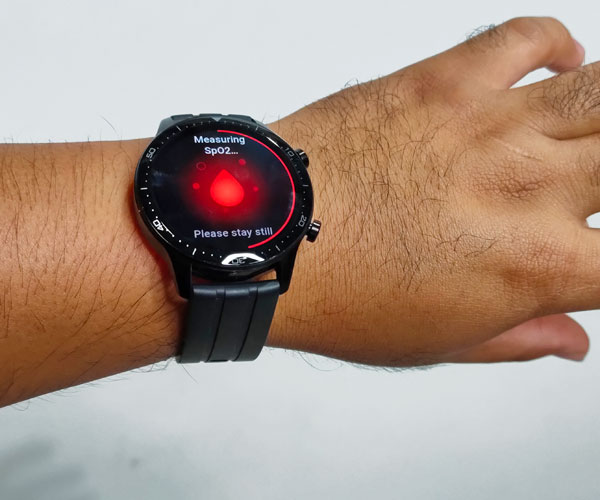 Health and Fitness are essential aspects of the realme Watch S Pro. It has a heart rate sensor that can measure the user’s heart rate 24/7 at 5-minute intervals.

There’s also a built-in GPS on the device for location tracking and a SpO2 or blood oxygen sensor that can measure the user’s blood oxygen saturation. It’s important to check this during prolonged exercises and high-altitude activities such as mountain climbing.

Users who aren’t as adventurous will appreciate the realme Watch S Pro’s sleep monitoring that automatically identifies the stages of sleep. However, there’s no Stress level measurement on the device. 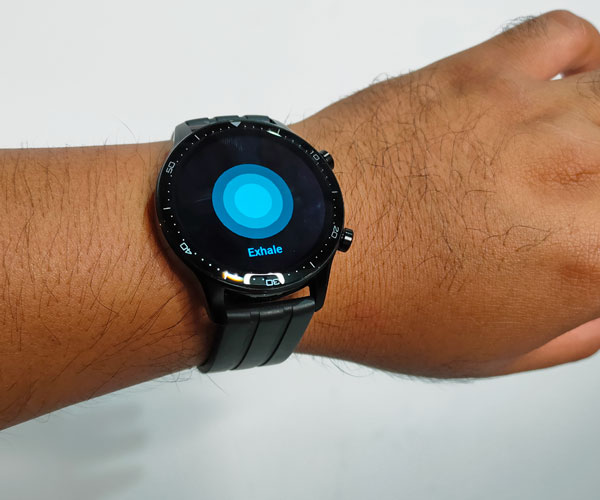 It will remind the user though when it’s time to drink water or stand up after being sedentary for quite some time. Both features can be customized to the user’s preferred frequency.

There are fifteen (15) sports modes on the watch including run, walk, cycling, hiking, swimming, basketball, yoga, rowing, free workout, and more. These activities come with tracking of varying health aspects like heart rate, steps, cadence, calories burned, and pace depending on the chosen activity.

The watch also has features for the user’s mental health, no just physical health. An app called Breath Training guides the user to breathing exercises that are proven to ease stress and reduce anxiety.

The realme Watch S Pro has a 420mAh battery that can last up to 14 days on a single charge. However, turning on the Always-On-Display feature and constantly using the device for workouts shortens the battery life to around 10 days.

That’s still a great battery life compared to some smartwatches that can only last a couple of days.

Re-charging the watch takes about 1 hour and 30 minutes. It uses a dock with a built-in USB cord but with no adaptor. It can be plugged into a smartphone charging adaptor or any USB-A port. 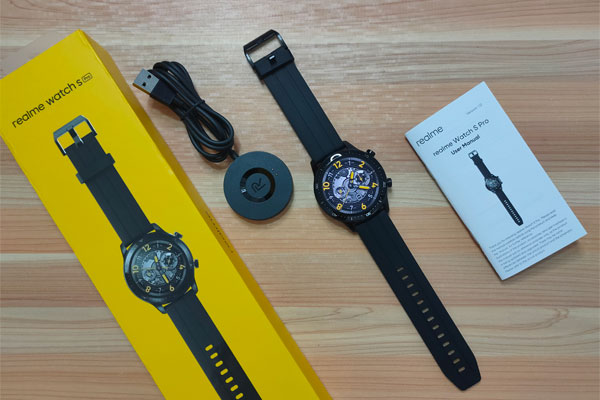 The realme Watch S Pro is a premium smartwatch for a much lower price tag. It looks like a normal diver’s wristwatch but packed with powerful tech inside.

I highly recommend it for those who are looking for a smartwatch that has almost all sought-after features except for an altimeter.

At ₱8,990.00 SRP, it undercuts many of its competitors including the pricier Samsung Galaxy Watch3, Huawei Watch GT2 Pro, and OPPO Watch. 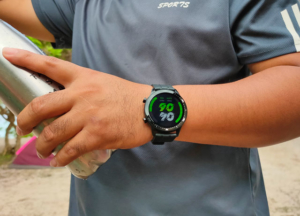 The realme Watch S Pro smartwatch looks like a typical wristwatch but hides powerful tech inside.