This means it has way better photography capabilities while maintaining a decent gaming performance and a long-lasting battery. Is it still worth it despite the new alternatives from competing brands? Let’s find out. 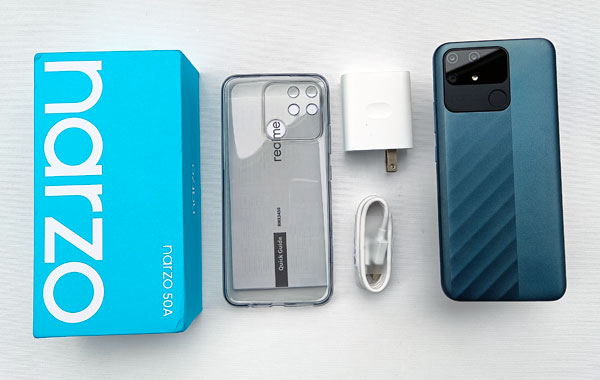 Unboxing the realme narzo 50A.

The realme narzo 50A comes in a blue cardboard box with a prominent narzo logo. Inside the box, there’s the phone, a free phone case, 18W charger, USB Type-C cord, pin ejector tool, and some documentations.

It doesn’t contain a free pair of earphones which is the usual case for realme smartphones. 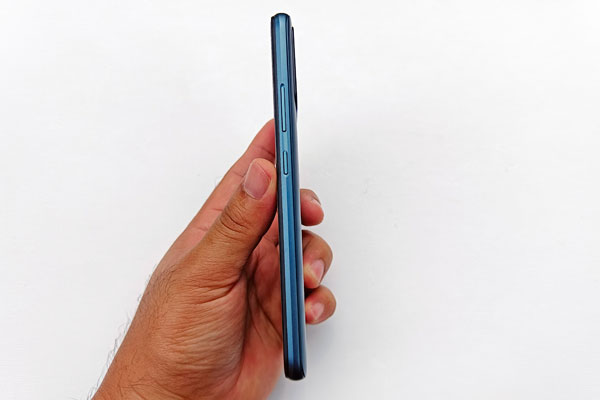 Side view of the realme narzo 50A.

Upon picking up the realme narzo 50A, I immediately noticed that it’s slightly heavier and thicker than other smartphones. This is mainly due to the massive 6000mAh battery.

Nevertheless, the phone remains comfortable because the sides are slightly curved and the width is manageable thanks to its tall aspect ratio.

Its huge camera matrix at the back gives it a unique look. Meanwhile, its two-tone texture makes the design interesting. There’s also a triple card slot accessible on the left side while the power and volume buttons are on the left side. 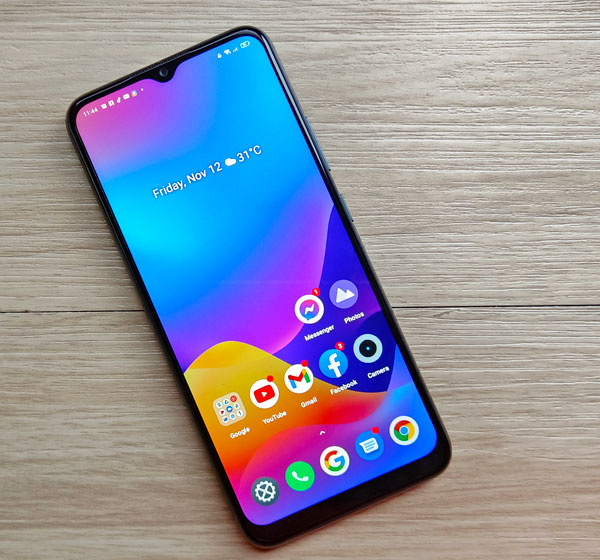 Front view of the realme narzo 50A showing its home screen.

The front of the realme narzo 50A is occupied by its 6.5-inch HD+ display. The bezels are narrow but with a thicker chin and a small notch for the selfie camera. Except for the screen resolution, it’s nothing unusual for a smartphone at this price range.

The HD+ resolution is a bit of a concern because pixelation can be noticed in several use cases. However, it seems to have helped in the phone’s gaming performance and battery life (more on this later).

It still has decent colors and brightness when used indoors but appears dim when used outside on a bright sunny day. 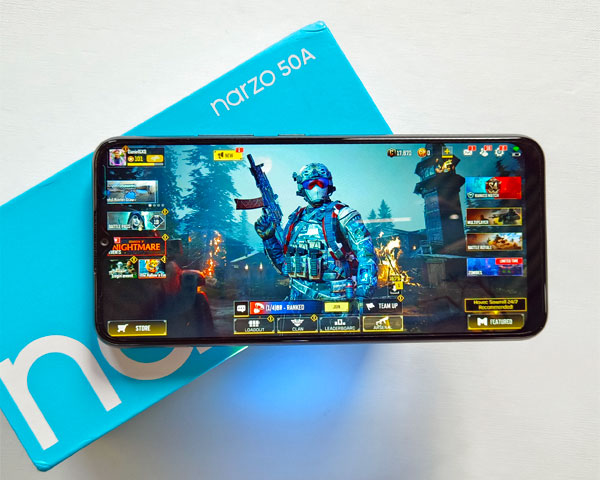 Call of Duty on the realme narzo 50A.

The realme narzo 50A is powered by a MediaTek Helio G85 chipset with 4GB of RAM. It runs on Android 11 OS with realme UI 2.0 and the Game Assistant software for games.

It has decent performance when playing popular games such as Mobile Legends (59fps), Call of Duty (59fps) in Multiplayer mode, and PUBG Mobile (40fps). The last two were set at the lowest graphics quality though to minimize frame drops.

However, more resource-intensive games such as Genshin Impact are out of its league. It’s laggy even at the lowest graphics settings.

The HD+ screen resolution of the realme narzo 50A’s screen must have helped in its gaming performance because it doesn’t have to render as many pixels as FHD+ smartphones.

Update: Two days after publishing this review, the realme narzo 50A received a software update (version RMX3430_11_A.06). It improved the smoothness of the user interface made app launches quicker. 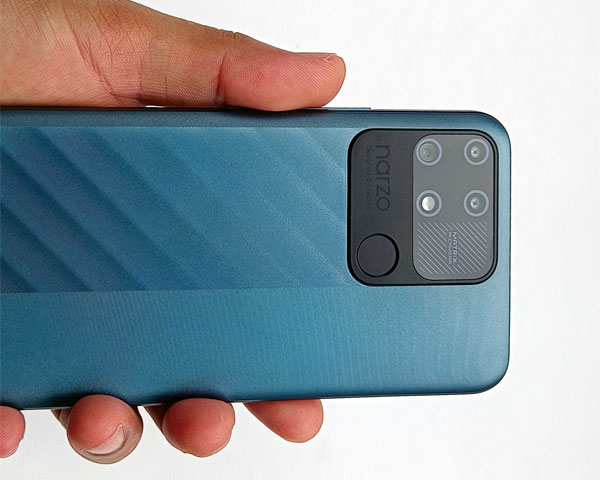 The rear camera matrix of the realme narzo 50A.

The biggest change that the realme narzo 50A offers is its 50MP main camera. It’s a Samsung-made ISOCELL image sensor with a pretty wide f/1.8 aperture.

It automatically combines four pixels into one resulting in 12.5-Megapixel pictures. This technique is called pixel binning and can result in brighter photos and sharper details. A full 50MP mode is still available in the camera app.

Here are some sample pictures from the realme narzo 50A: 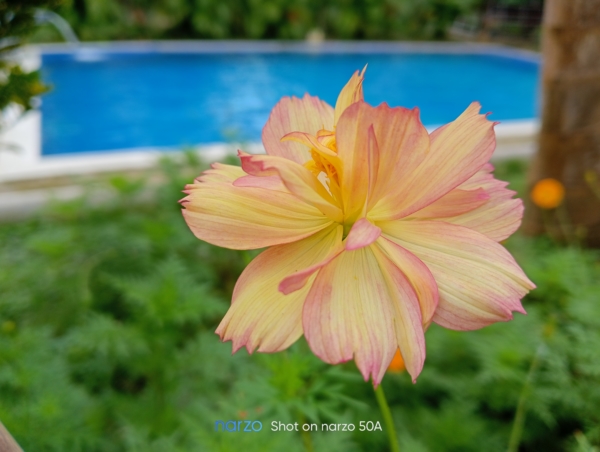 Close-up picture of a flower | realme narzo 50A 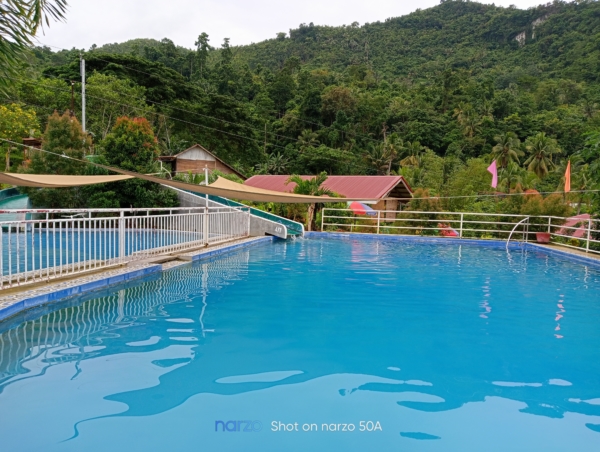 Swimming pool with trees in the background | realme narzo 50A 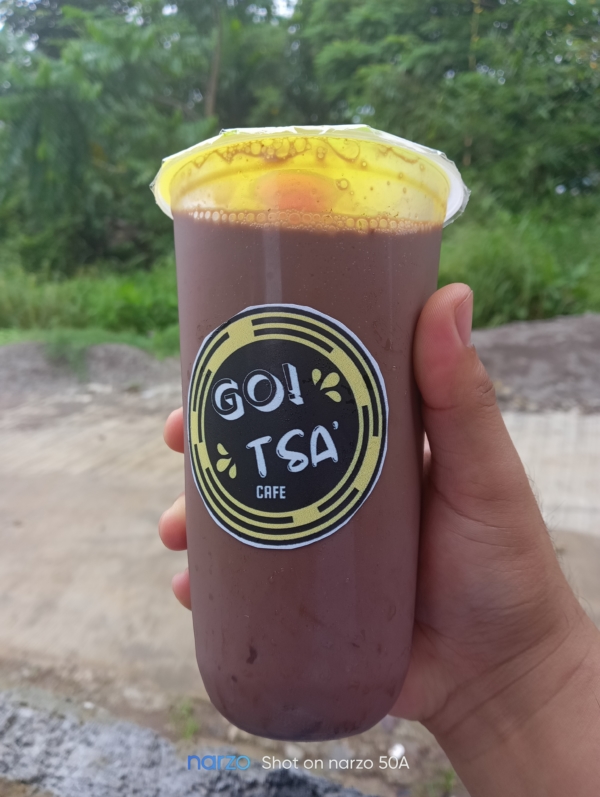 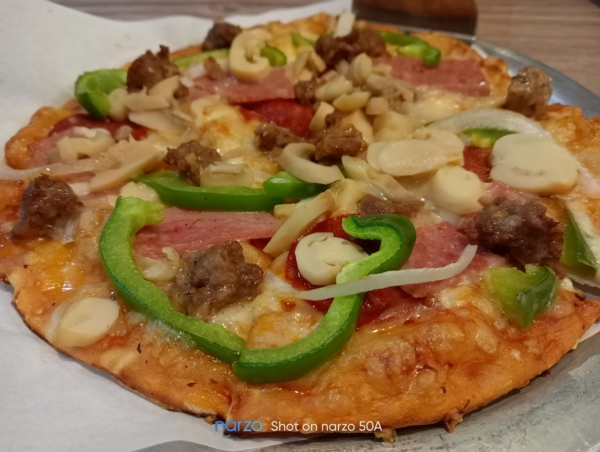 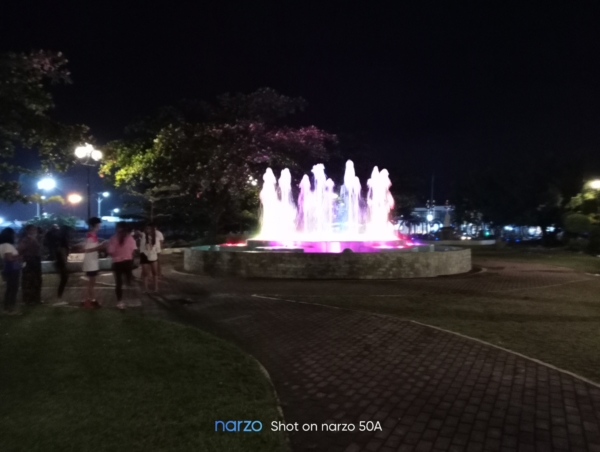 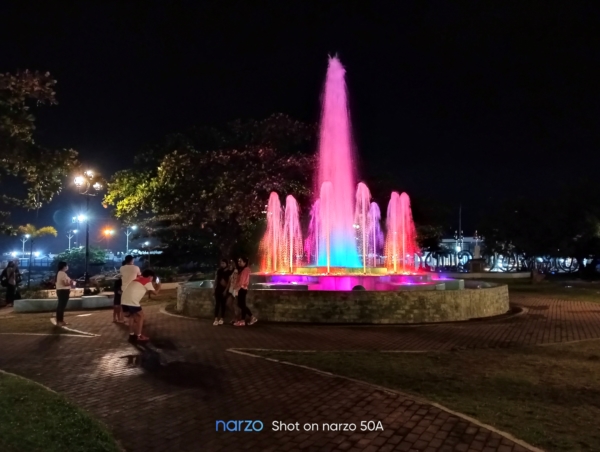 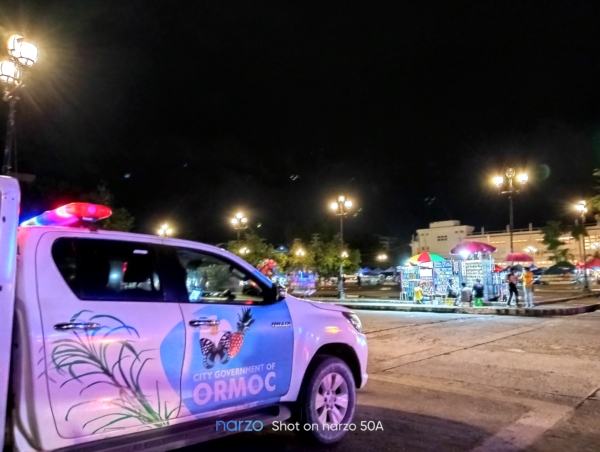 The realme narzo 50A can produce good-looking pictures with plenty of details, natural colors, and decent dynamic range during the day. It’s not the best but it’s impressive for the price.

At night, the pictures turn grainy and pale. There’s a dedicated Night Mode that improves the color quality and increases the brightness but the graininess remains. 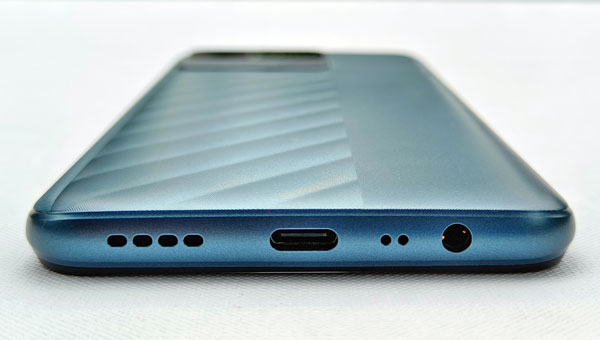 The loudspeaker, USB port, and audio jack of the realme narzo 50A.

The realme narzo 50A is a dual-SIM 4G LTE smartphone that also supports 5GHz Wi-Fi networks.

Voice calls sound clear through its earpiece and the loudspeaker can get loud although it has virtually no bass. There are also no free earphones included in the box so earphones or Bluetooth speakers are nice freebies.

There’s a rear-mounted fingerprint scanner located together with the rear cameras which is quick and reliable. It also supports face recognition using the front camera. 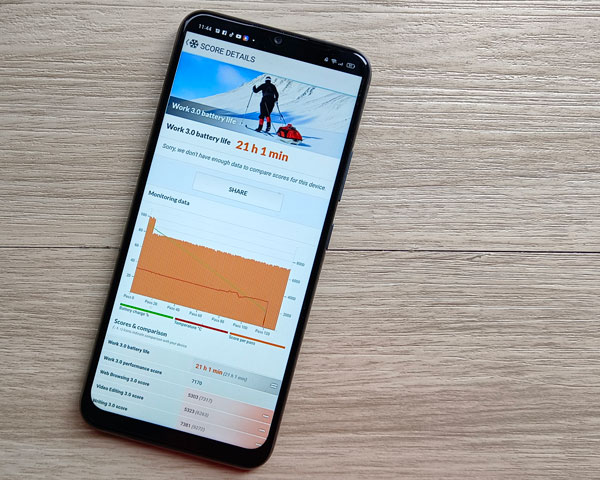 A massive 6,000mAh battery powers the realme narzo 50A. It can usually last a full two days of normal use on a single charge!

It scored 21 hours and 1 minute on the PCMark Battery Life Test 3.0 benchmark. That’s the highest score among all smartphones I’ve reviewed so far.

However, recharging the device from 0% to 100% battery capacity takes almost three hours using the 18W charger inside the box. 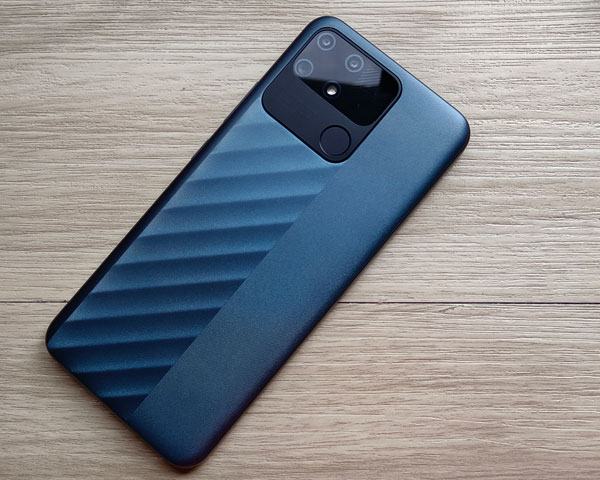 The back of the realme narzo 50A.

The realme narzo 50A can run popular games smoothly at low to medium graphics quality. It can also take good pictures using its new 50MP camera while the massive 6000mAh battery gives it impressive battery life.

However, the device has a sluggish user interface (improved via software update) and some users might not be content with its HD+ screen resolution.

Hence, it’s a good choice for budget-conscious gamers who also like to dabble in casual photography and don’t mind some of its disadvantages. Otherwise, upgrading to the realme 8 5G might be a better option. 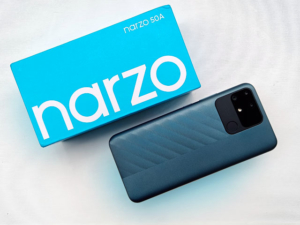 The realme narzo 50A is a decent “budget gaming smartphone” with a good camera and long-lasting battery.