It uses the Qualcomm Snapdragon 680 chipset which only has 4G LTE connectivity and a lackluster gaming capability. Let’s find out if these features are well-balanced and made it worthy to be the flag bearer of realme’s main number series.

What’s inside the realme 9 box? 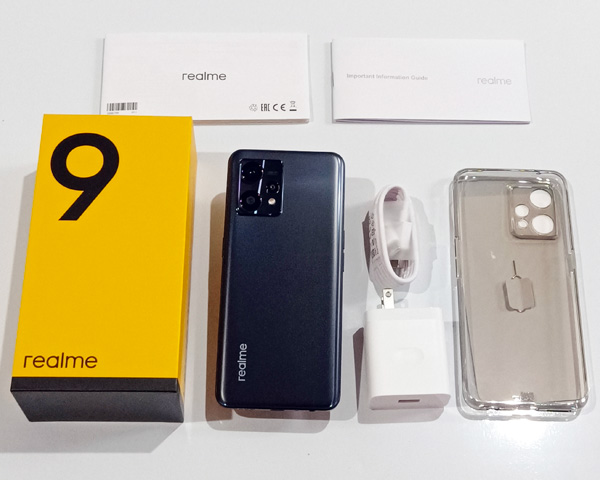 The realme 9 comes in a new re-designed box with a cool black and yellow theme. The device color and memory configuration are specified at the back.

Inside the box are the realme 9 smartphone itself, SIM ejector pin, USB Type-C cable, 33W charger, and some documents. There’s also a FREE transparent phone case in the box.

As usual, there are no earphones inside the box but those who purchase it via Lazada Super Brand Day on June 19, 2022, will get FREE realme Buds Q2 wireless Bluetooth earbuds! 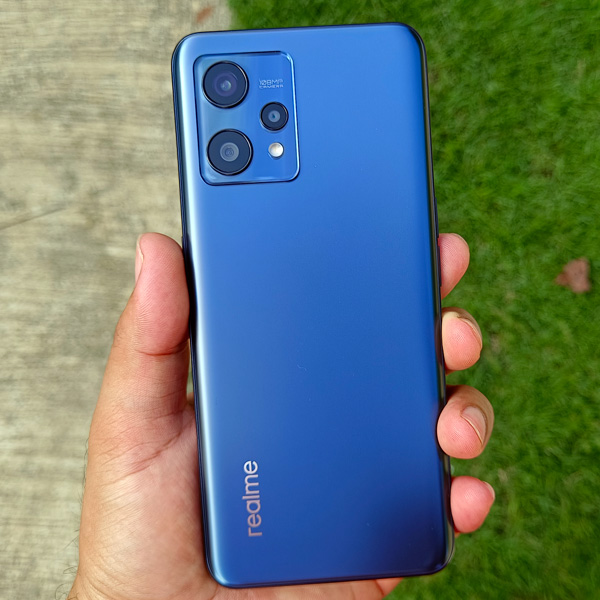 It’s slim and light at just under 8mm in thickness and 178 grams. The power button is on its right side while the volume buttons and SIM card tray are on the left side. A 3.5mm audio jack, USB Type-C port, and loudspeaker grille are at the bottom.

Its back is made up of a plastic material but still feels well-built and sturdy. The beveled camera island also adds character to the design of the device.

This is a well-designed smartphone, especially the Stargaze White and Sunburst Gold colors. 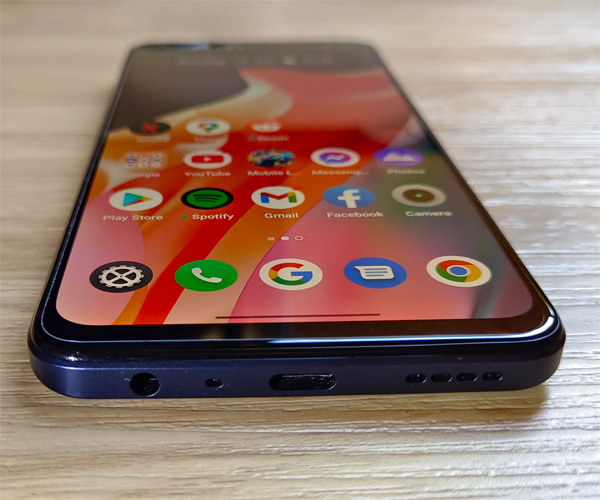 The realme 9’s screen viewed at an angle.

A 6.4-inch FHD+ Super AMOLED display occupies almost the entire front panel of the realme 9 smartphone with narrow bezels on the sides and at the top. The screen has vivid colors and impressive contrast since it’s an AMOLED display making it great for watching Netflix shows, YouTube videos, and Tiktoks.

It’s bright enough for outdoor use with texts remaining legible even under the noontime sun. It also has 90Hz high screen refresh rate which makes animations and transitions feel ultra-smooth.

Underneath the display is an optical fingerprint scanner that can securely unlock the device quickly. However, it’s placed a bit too low and requires adjusting the grip to press with the thumb. 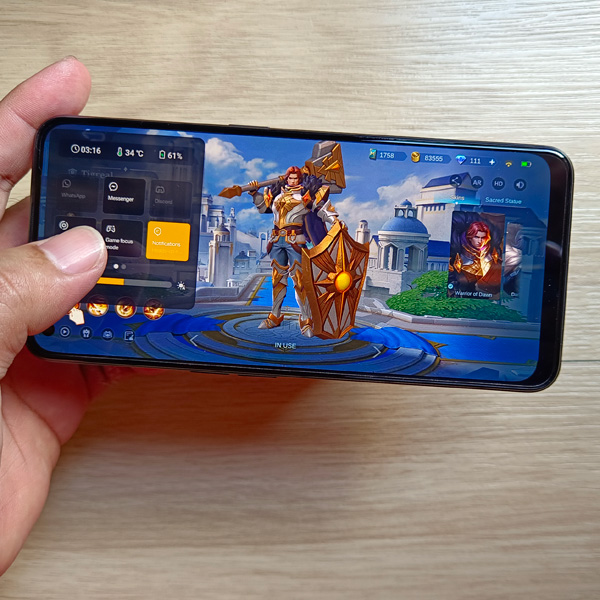 Accessing the Game Toolkit sidebar of the realme 9 while playing Mobile Legends.

A Qualcomm Snapdragon 680 chipset powers the realme 9 along with 6GB of physical RAM and up to 5GB of RAM expansion.

It’s generally smooth thanks to the high screen refresh rate. Apps open quickly, switching between apps is snappy, and scrolling across feeds feels fluid. There are occasional hiccups though, especially when receiving a lot of notifications. 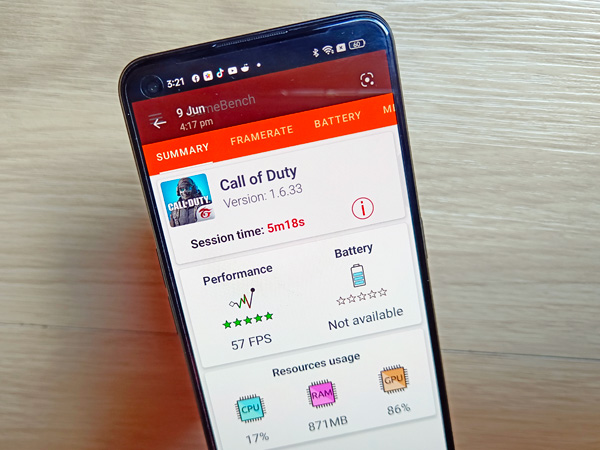 FPS test result of Call of Duty on the realme 9.

I’ve tested its gaming performance in a more detailed realme 9 gaming review. It can run Mobile Legends and Call of Duty Mobile smoothly at medium graphics quality and with some frame drops at high graphics quality. However, Genshin Impact is laggy even at the lowest graphics quality.

After a prolonged gaming session, the device can slightly turn warm but it remains comfortable to use. There are also several useful gaming features that are quickly accessible by swiping from the edge of the display. 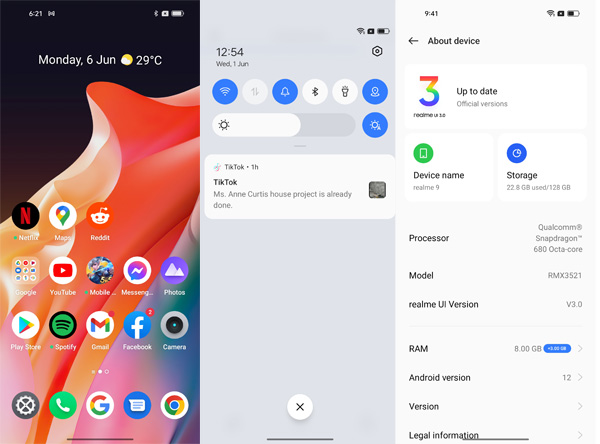 The realme 9 runs on an Android 12 operating system with realme UI 3.0 software.

It looks neat and clean with several pre-installed apps out of the box. Some are useful like the Soloop Cut video editor, Shopee, and realme Link. 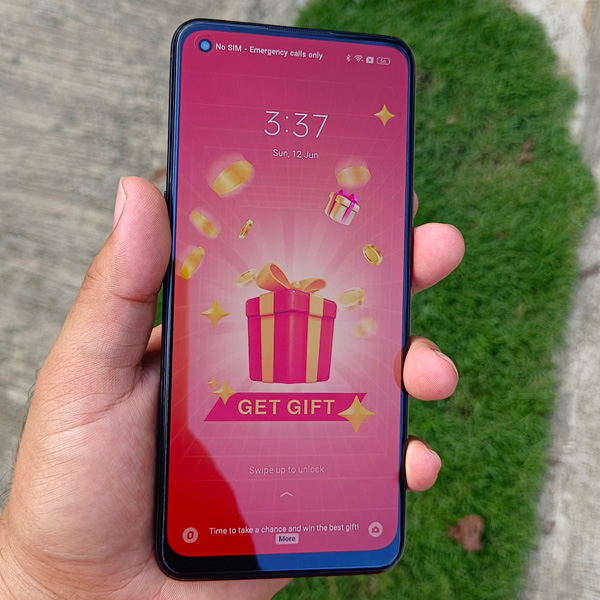 Lockscreen Magazine of the realme 9.

One thing I found annoying is the fact that there are ads on the lockscreen. I might have enabled the latter by mistake during the setup process but it’s a feature called Lockscreen Magazine. Thankfully, this can easily be disabled in the settings. 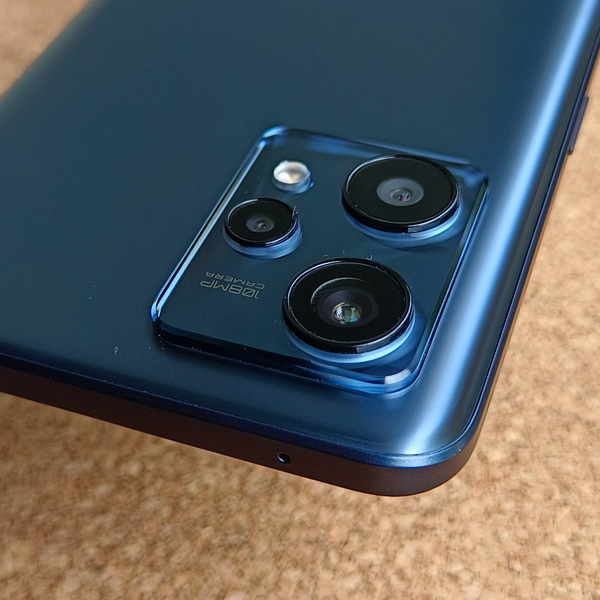 The 108MP triple camera array of the realme 9.

The realme 9 is equipped with a triple rear camera array. This is composed of a 108 Megapixel main camera, 8 Megapixel ultra-wide camera, and 2 Megapixel depth camera.

It uses 9-in-1 pixel binning technology to produce good-looking 12 Megapixel pictures. The colors look natural, details are sharp, and dynamic range is well-balanced.

Portrait shots look good but subject-edge separation can be improved. Low-light pictures are also impressive when the dedicated Night mode is used. 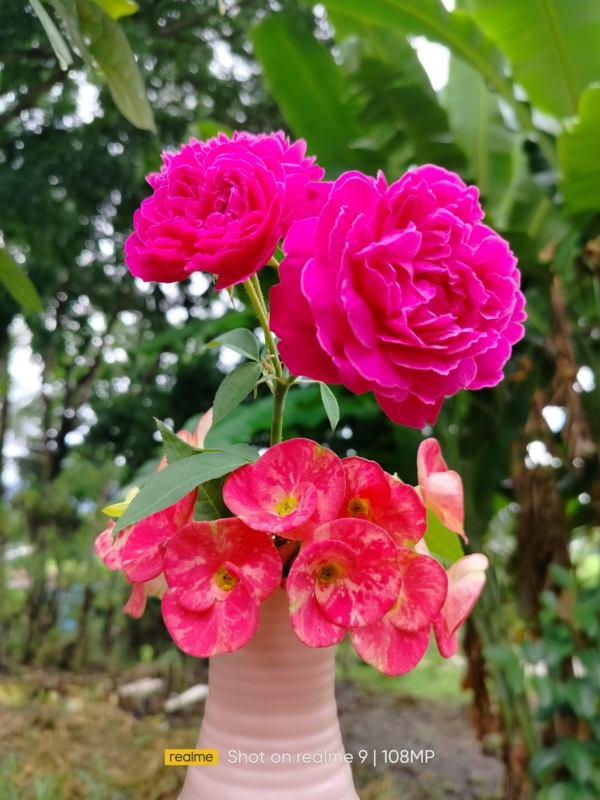 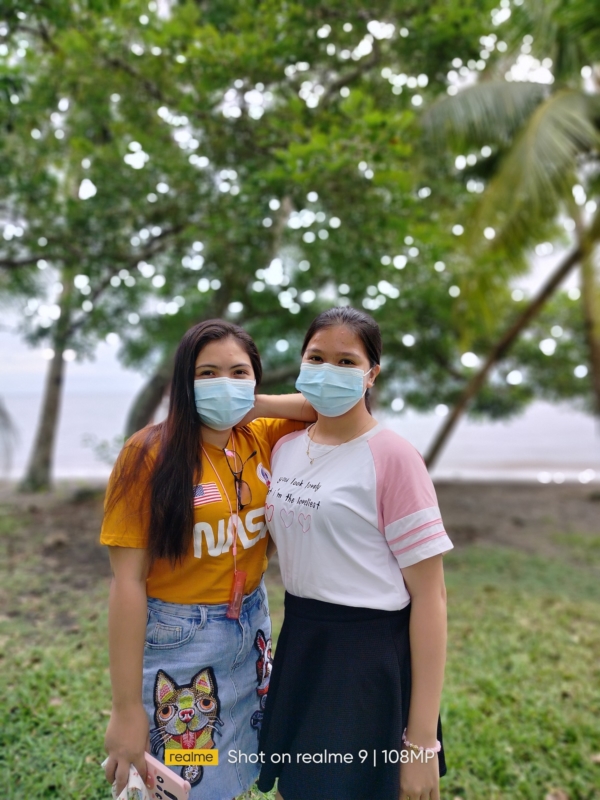 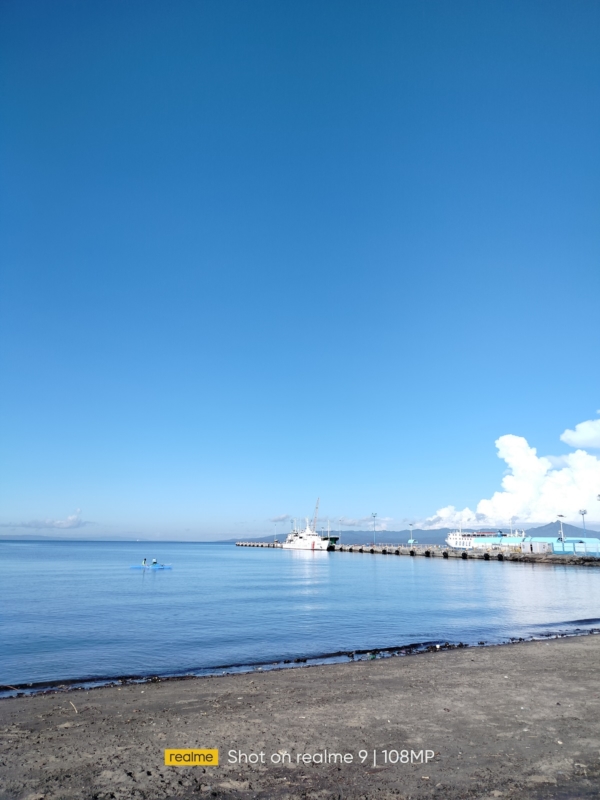 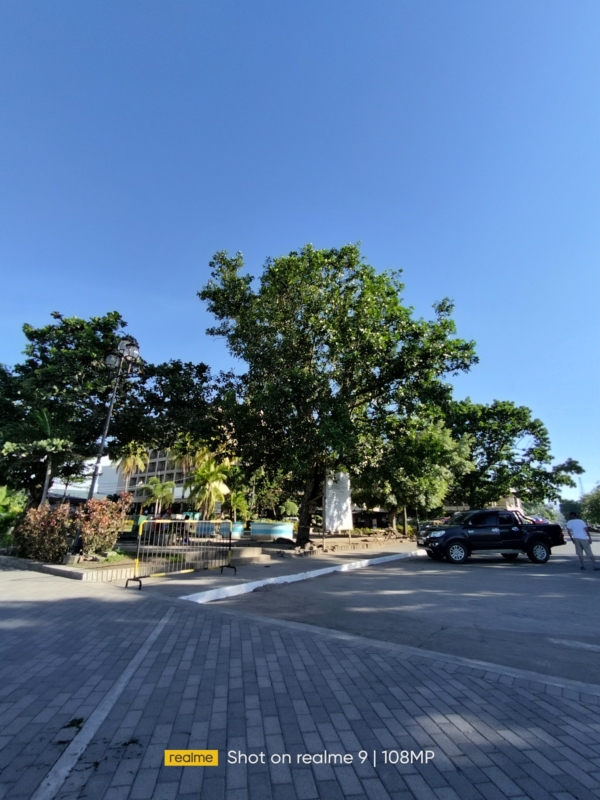 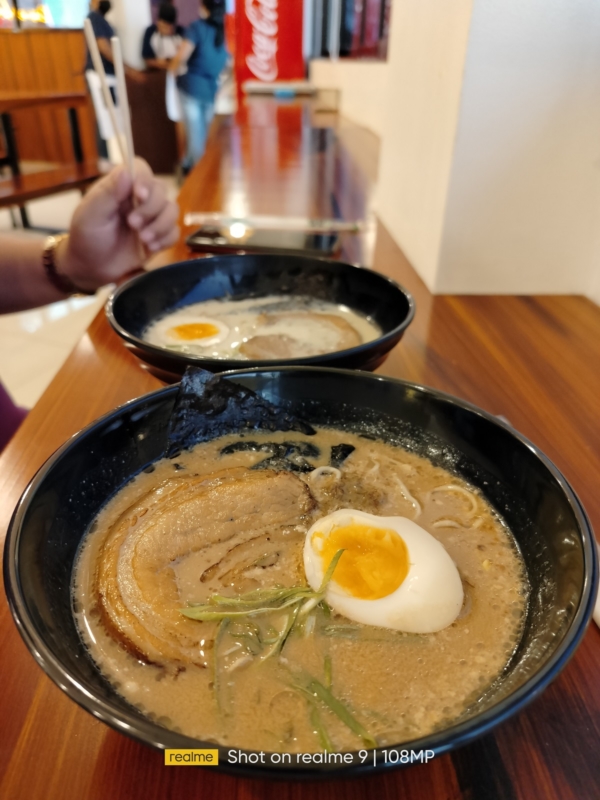 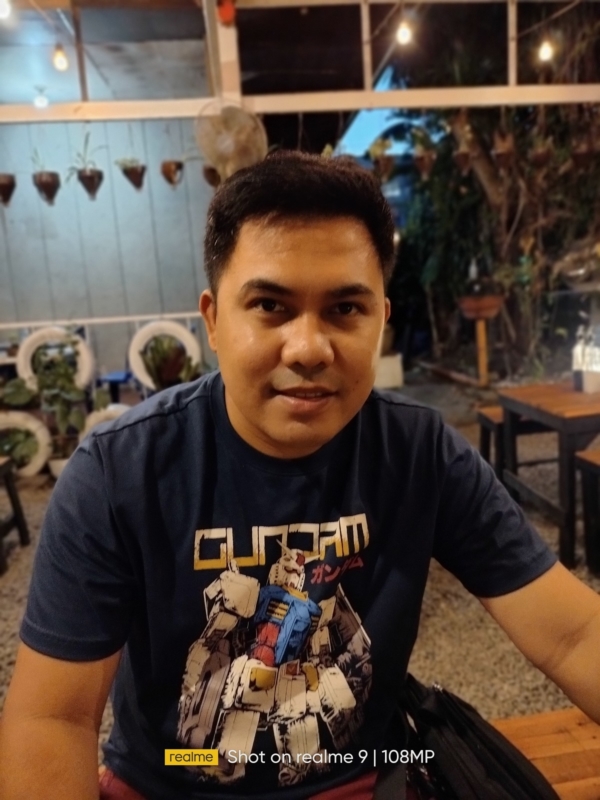 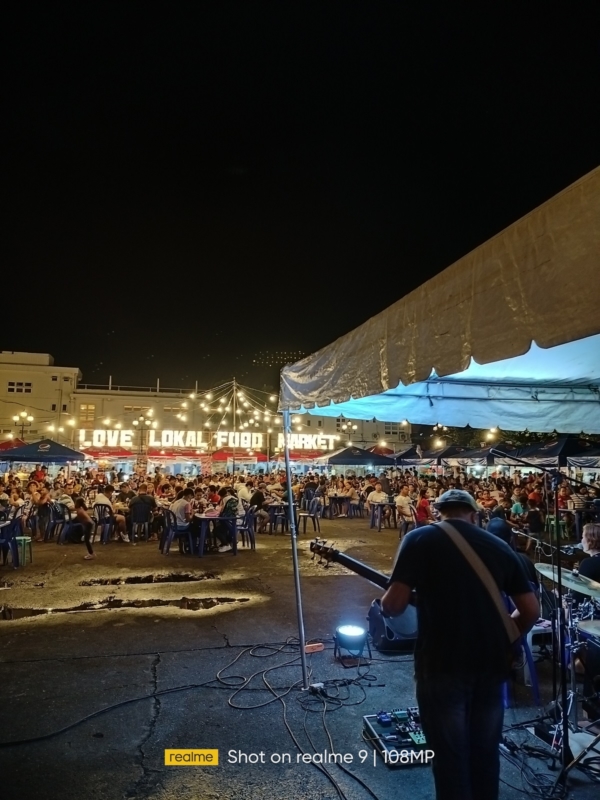 Meanwhile, the 16 Megapixel selfie camera of the realme 9 takes crisp and vibrant selfies. Low-light selfies are less detailed though even with the screen flash feature.

Both the front and rear cameras can record videos up to 1080p resolution with decent quality. It’s enough for vlogging, TikToks, or casual video recording.

Some users might be left wanting the capability to shoot videos at 4k resolution though. 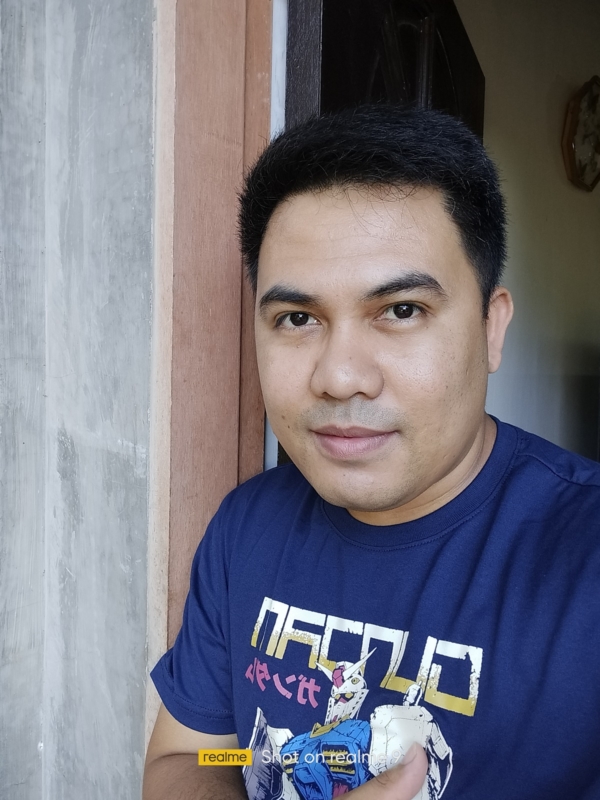 Mobile data speeds are sufficient for casual browsing, video streaming, and gaming. However, it’s unfortunate that it doesn’t have 5G capability when many areas in the country already have 5G signals.

In terms of audio quality, the device is equipped with a 3.5mm audio jack with high-res audio but the loudspeaker is mediocre. 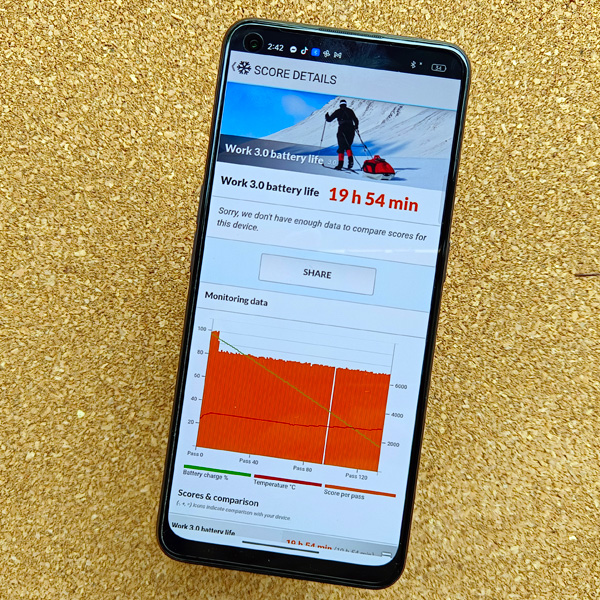 A large 5,000mAh battery powers the realme 9 and lasts almost two days on a single charge with my normal use.

It scored 19 hours and 54 minutes on the PCMark battery life test! That’s one of the highest scores I’ve encountered among the smartphones I’ve reviewed. As usual, the phone was placed in airplane mode and 50% screen brightness during the test.

Re-charging the device from 0% to 100% battery capacity takes 1 hour and 15 minutes when using the bundled 33W Dart Charge fast-charger. 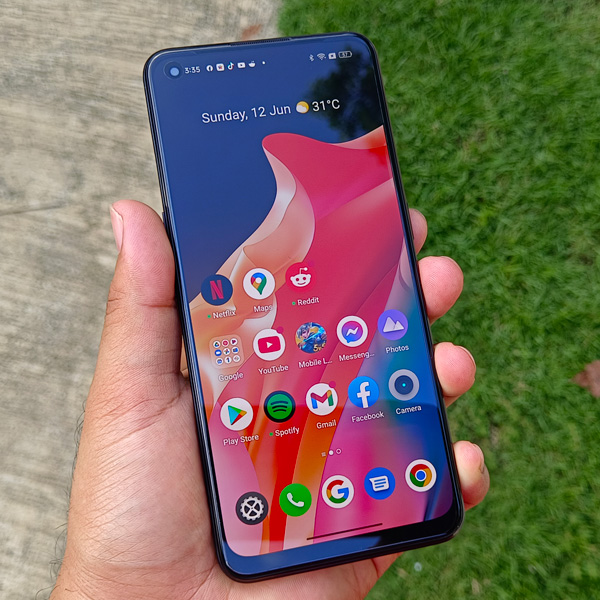 My home screen setup while reviewing the realme 9.

The realme 9 is a good smartphone in terms of design, display, camera quality, and battery longevity. I can recommend it to aspiring social media content creators and casual users.

However, its lack of 5G connectivity and lackluster gaming capability make it a poor pick for gamers. They might have to look at the realme 9 Pro and realme 9 Pro+.

There is a place and market for the realme 9 smartphone. Gamers might find it lacking but those who give a bigger importance for the screen and camera quality will be happy. 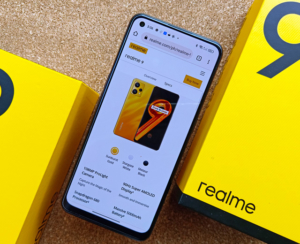 The realme 9 is a good smartphone in terms of design, display, camera quality, and battery longevity but it lacks 5G connectivity.