After reviewing the regular Realme 5, I switched over to its Pro version for another full review – the Realme 5 Pro.

It’s more powerful and packs better features but I subjected it to the same tests for its performance, camera quality, battery longevity and more. Let’s find out if it’s better to pick the Realme 5 Pro or just be contented with the regular Realme 5! 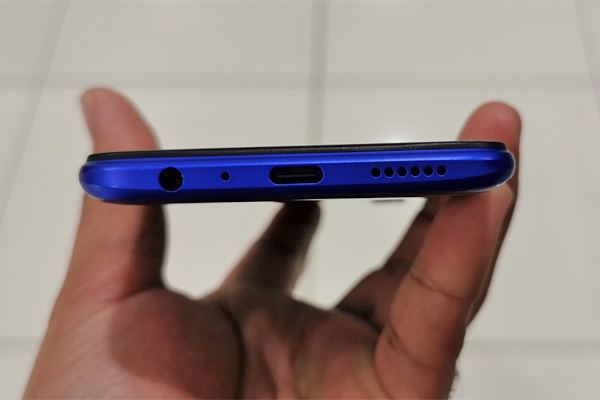 The Realme 5 Pro has a crystal pattern at the back with a gradient color scheme making it look more trendy. I have the Sparkling Blue color variant but there’s also a Crystal Green as an alternative.

Both its tall quad-camera module and rear-mounted fingerprint scanner are surrounded by a strip of metal. It doesn’t just protect these parts but also adds to the overall aesthetics.

It has its power button on the left side and volume buttons on the right side along with the SIM card tray. A 3.5mm audio jack, USB Type-C port, and loudspeaker are at the bottom. 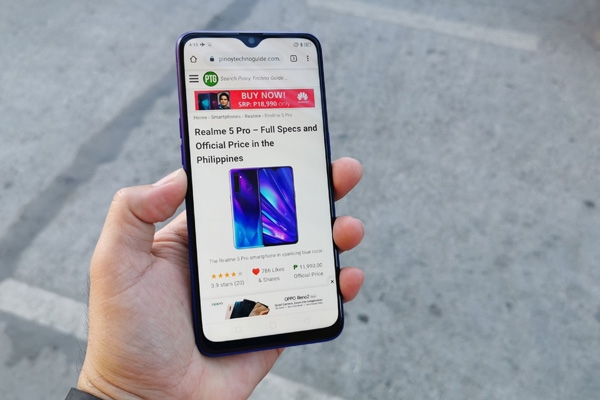 A 6.3-inch display with FHD+ resolution occupies the front of the device. It has a small notch at the top for the selfie camera and narrow bezels on both sides.

It feels compact to hold thanks to slightly curved edges on the front glass as well as on the back. The 19.5:9 aspect ratio of the display also helps to make it taller instead of wider. I prefer smaller smartphones for ease of use and the Realme 5 Pro fits perfectly in my hands.

The screen itself is bright, clear, and sharp. It’s not the brightest screen but it’s bright enough to be used outdoors at noon. It also supports up to 10 multi-touch inputs and can be made to look cooler or warmer in the settings. 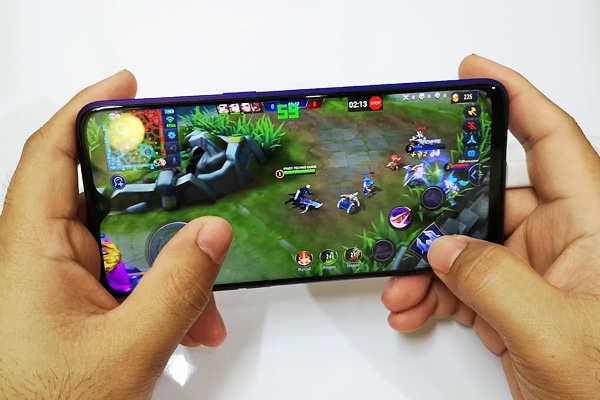 The Realme 5 Pro is powered by a Qualcomm Snapdragon 712 AIE chipset with a 2.3GHz octa-core CPU, Adreno 616 GPU, and either 4GB or 8GB of RAM. I’m using the 8GB RAM variant of the device for this review.

It feels smooth and fluid when swiping and scrolling through the phone’s user interface. It’s running on the Android 9 Pie operating system with ColorOS 6 software.

Here are its scores in some benchmark apps: 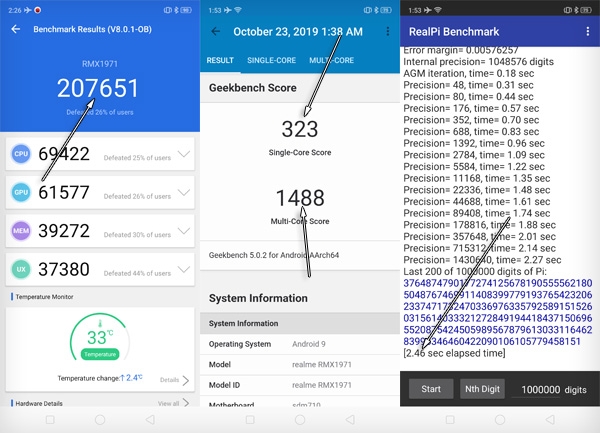 For gaming performance, I tested three of the most popular mobile games on the Realme 5 Pro – Mobile Legends, NBA 2K20, and Rules of Survival. Using GameBench Pro, I measured the average framerate with the graphics settings of the games set at the maximum options.

Here are the results of the Realme 5 Pro gaming tests:

These results are almost perfect since the maximum framerate supported by these games is 60 fps. NBA 2K20 and Rules of Survival are better played at medium graphics to prevent the frame drops when the graphics quality is maxed out.

For the complete gaming review, click here. You can also watch the Realme 5 Pro Gaming Review video on YouTube.

For photography, the Realme 5 Pro is equipped with a quad-camera setup at the back and a single 16MP selfie camera. The quad cameras are 48MP, 8MP ultra-wide, 2MP macro camera, and 2MP depth camera.

I took several sample pictures using the Realme 5 Pro smartphone in Ormoc City and here are some of them: 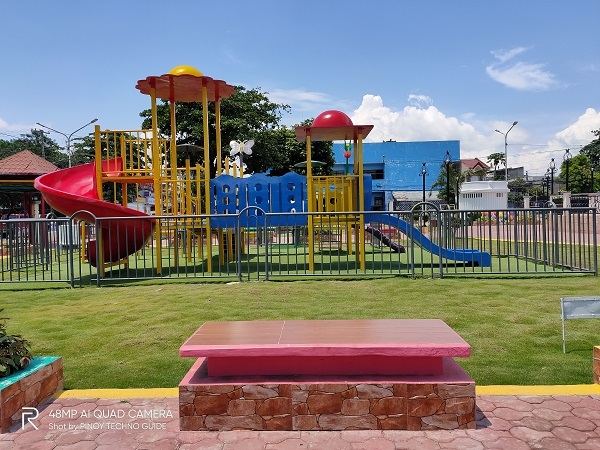 An empty playground by Realme 5 Pro.

This photo of an empty playground was taken at noon. Notice the vibrant colors, sharp details, and good dynamic range. The last one means those areas in the shadows are still bright enough. 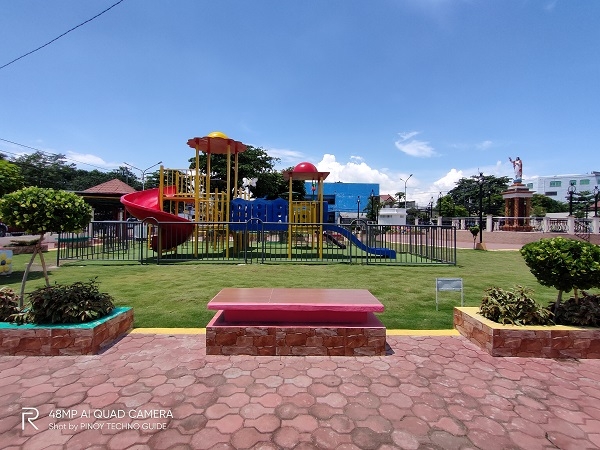 Here’s another picture of the same playground but now using the ultra-wide camera. It captured a wider area but the colors are more muted and the dynamic range is slightly reduced. This is best used for landscape shots and when you want to include more people in a single picture. 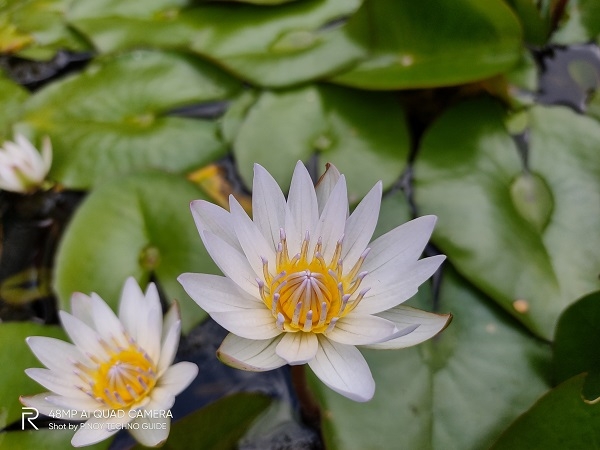 A flower shot with the Realme 5 Pro.

I kept the AI Scene Recognition feature of the Realme 5 Pro turned on and it used the Super Macro mode in taking this picture of a flower.

I really like this picture. The details on the flower are well-defined, its colors look natural, and the soft blur on the leaves and other flowers make it look like something captured by a professional photographer. 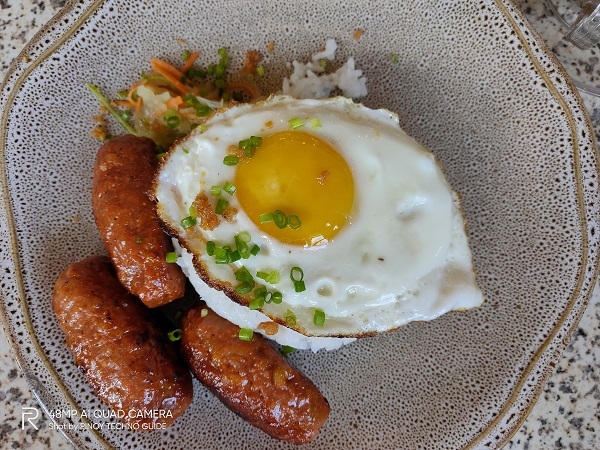 This wasn’t a great breakfast but the Realme 5 Pro made it look good. 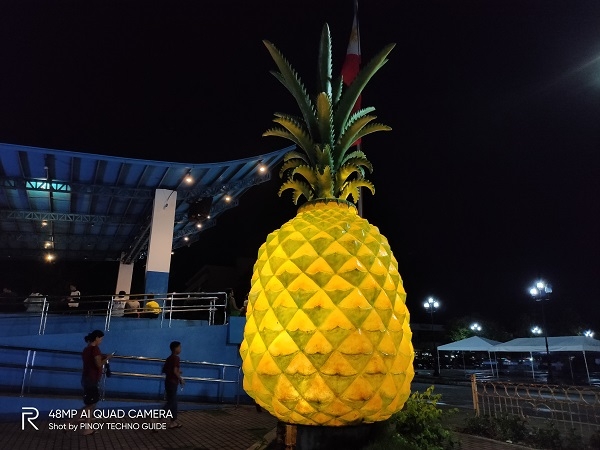 Shooting with the Realme 5 Pro at night is a lot of fun! This was a point-and-shoot picture of the pineapple statue in the city plaza. The details are a bit smoothened out but the colors are still on point despite the dim light. 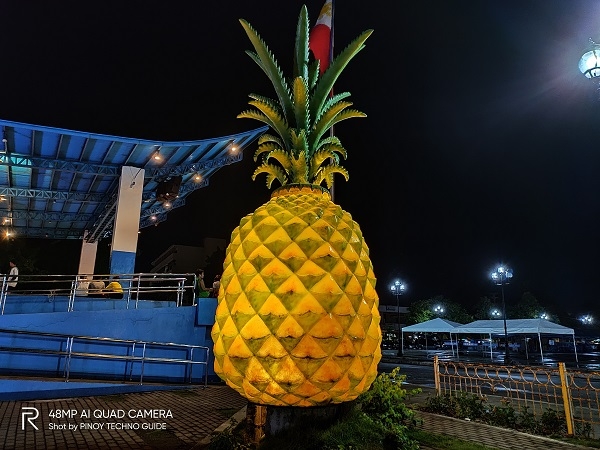 Using the dedicated Nightscape camera mode results in sharper pictures with way better dynamic range and more vibrant colors. It takes about 3-4 seconds to capture this picture but the results are worth the wait. 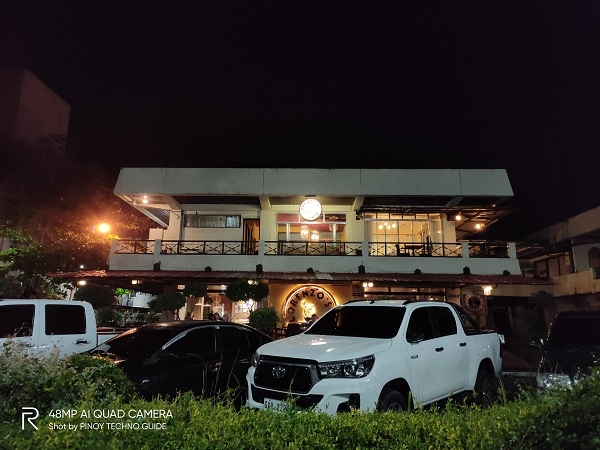 Here’s another sample picture that doesn’t use the Nightscape mode. Notice the blown out logo of the cafe at the second floor. 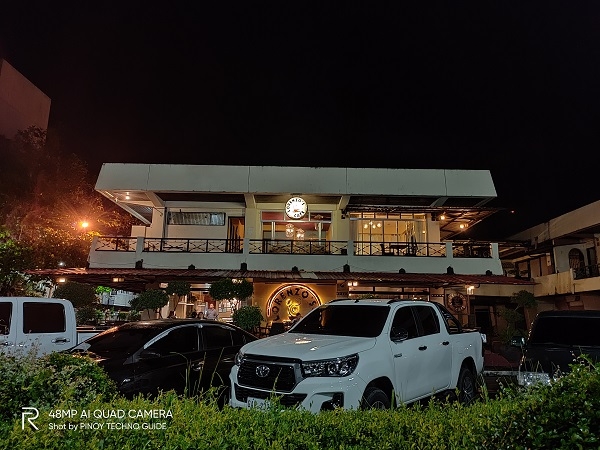 Compare that with the clearer logo in this second picture which was captured using Nightscape Mode. 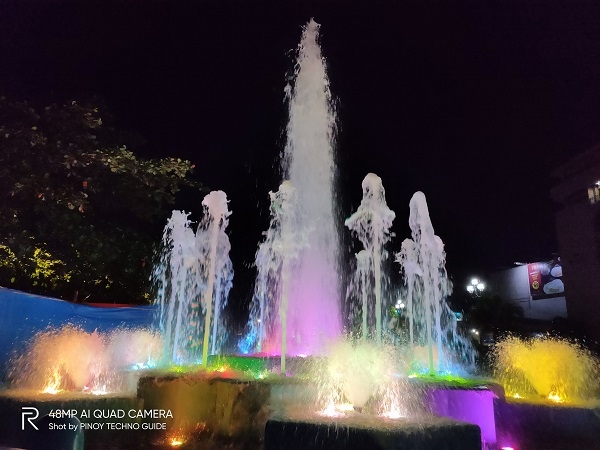 Did I already tell you I had a lot of fun shooting pictures with the Realme 5 Pro? Here’s another one – the water fountain in Ormoc City plaza. 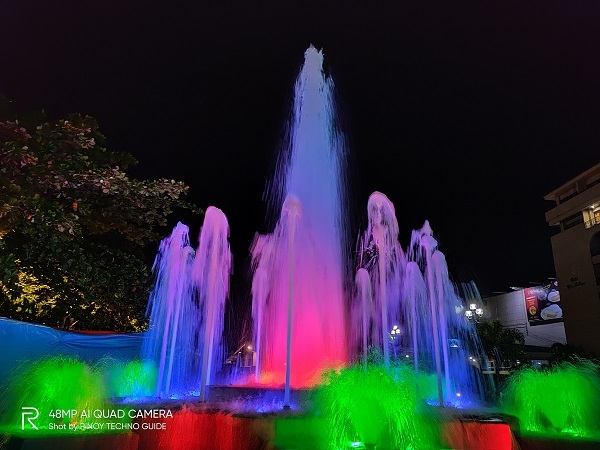 So, I’m a bit undecided in this last duo of sample pictures. The first one looks like it captured how the water fountain truly looks like while the Nightscape shot is more stylized with a silky water effect.

The Nightscape Mode is better used when shooting stationary subjects while moving objects will look more natural with the normal shooting mode.

The Realme 5 Pro can also shoot up to 4K videos at 30 fps. The 4K videos are sharp with natural-looking colors but there’s no stabilization. My advice is to shoot videos at 1080p resolution which is the default setting. It’s not as detailed but the Electronic Image Stabilization helps in reducing the shakiness. 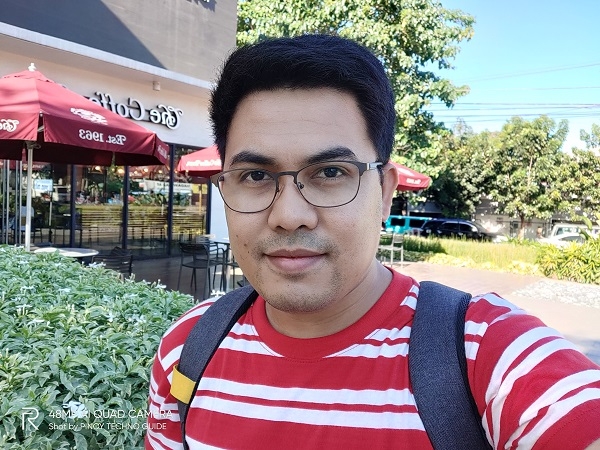 Selfie with the Realme 5 Pro.

The resulting selfies look sharp with a lot of details. It can get a little too detailed though and the greens are a bit muted. Thankfully, there’s a built-in AI Beauty feature to smoothen out the blemishes. 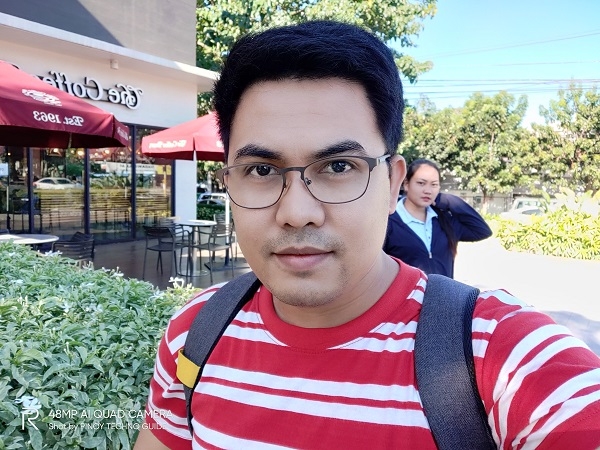 The smoothening effect is a little obvious but that’s because you’ve seen the previous sample selfie. It doesn’t turn my cheeks pink so I’ll keep this feature turned on.

The Realme 5 Pro has two SIM card slots that are different from the microSD card slot. Both SIM cards can access 4G LTE networks for mobile internet connectivity and the speed is good if the device is within 4G-covered areas.

For wired connections, the device has a USB Type-C port so the minor inconvenience of a micro-USB port is not present. It also retains the 3.5mm audio jack which is still useful even when flagship phones now opt for fewer ports.

It has a loudspeaker at the bottom that’s truly loud. I seldom set it beyond 60% volume when listening to music or YouTube videos while I’m doing house chores. The sound quality is decent too as long as you don’t expect a lot of bass.

However, there are no free earphones inside the box. You can bundle a Realme Buds when you purchase the phone and you’ll be all set. 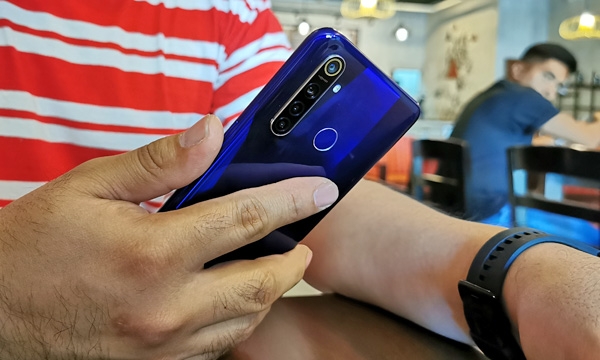 The fingerprint scanner at the back.

The Realme 5 Pro has two biometric security features – a fingerprint scanner at the back and face unlock using its selfie camera.

Both features unlock the phone swiftly with the fingerprint scanner just a tiny bit faster. I found myself using the face unlock feature more often though. It’s just more convenient.

Meanwhile, the sensors present on the device include a gyroscope for AR and VR apps.

All About the Battery 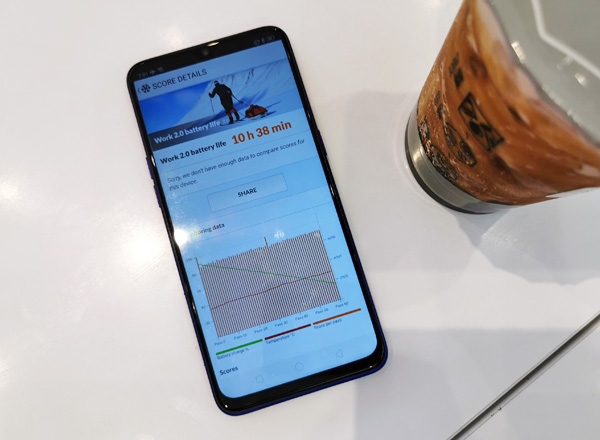 The Realme 5 Pro is powered by a 4,035mAh Lithium Polymer battery. My usual usage leaves about 30 to 20% battery capacity when I finally sleep at night.

On the PCMark Battery Test 2.0, the phone achieved a score of 10 hours and 33 minutes. As usual, I conducted the test with the screen brightness set to 50% and airplane mode turned on.

This score is average when compared to other smartphones that I’ve tested but there’s one feature that makes it better – VOOC Flash Charge!

The Realme 5 Pro comes with a VOOC Flash Charge charger in the box. It supplies 20W of power to the device which results in charging time of 1 hour and 30 minutes only! 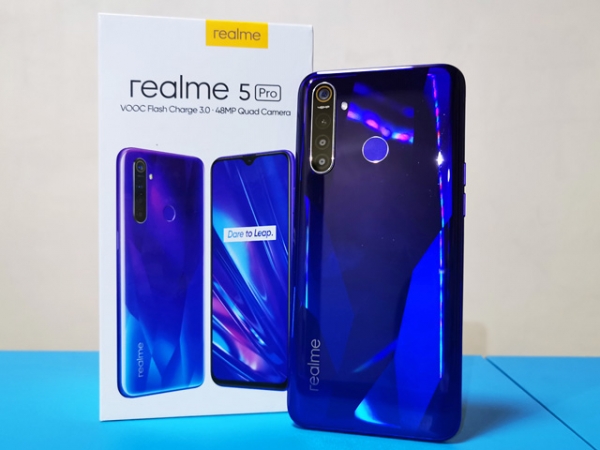 The Realme 5 Pro smartphone and its box.

The Realme 5 Pro is another bang for the buck smartphone from Realme. It’s hard to find something to complain about the phone. You’ll have to be nitpicky to do so.

The Realme 5 Pro has a trendy and compact design; good specs for gaming and everyday tasks; very capable set of cameras; and a battery to last a whole day with fast charging.

My recommendation is to go for the 8GB RAM + 128GB storage variant since the price difference between the two is just ₱2,000. 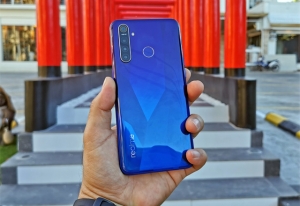 The Realme 5 Pro has a trendy design, good specs for gaming, very capable set of cameras and fast charging.