Huawei is known for producing smartphones with long lasting batteries. The Huawei Y7 Prime is a testament to this with its 4000mAh battery.

Surprisingly, it also has a sleek design and decent performance. After using the device for several weeks, here is my personal review: The Huawei Y7 Prime has metal on the back.

The Huawei Y7 Prime has a metal back plate that provides a premium feeling when the device is held in one hand. However, the sides are made out of polycarbonate plastic – a necessary trade-off for good cellular signal reception.

On the front of the device is its 5.5 inch display. The 2.5D curved edges make the phone look sleek but the bezels could have been trimmed a bit. Still, swiping from the sides feel smooth.

I accidentally dropped the device once from waist high down to a concrete floor. There are a few scrapes on its upper right corner but it still works perfectly fine. At first, I found the 5.5 inch HD display of the Huawei Y7 Prime to be short on brightness. However, this was because I was coming from the brighter Huawei GR3 2017 which also boasts a higher full HD resolution. Nevertheless, the former is still legible even under direct sunlight.

It runs on Android 7.0 Nougat with the company’s EMUI 5.1 software on top. All app icons and widgets are laid out on the home screens by default but an app drawer can be enabled in the settings.

I especially like the Eye Comfort feature of the software. This filters out the blue light from the screen to make it more comfortable to look at especially while reading during night time.

The Huawei Y7 Prime runs on a 1.4GHz octa core Snapdragon 435 processor with 3GB of RAM. This belongs to the entry level series of chips from Qualcomm but its quality shows in the performance of the device.

Scrolling across home screens or down through webpages is smooth and fluid. Gaming performance is decent too with minimal stutters in heavy games and virtually flawless rendering of casual games.

I enjoyed playing Asphalt 8 Airborne on the Huawei Y7 Prime with the graphics set at High. Mobile Legends also runs smoothly but there are jagged lines and blurry graphics – I’m guessing it’s the game and not the device.

While photography is not its biggest strength, the Huawei Y7 Prime can still take good quality pictures and videos with ample lighting. Low light shots are acceptable too.

Photos taken using the 12 Megapixel rear camera have natural colors but the dynamic range can be improved. It had a problem focusing on the subject I tap on but this has been fixed in a software update two weeks after I got the device.

Meanwhile, the 8 Megapixel front camera can also produce social media worthy selfies even in low light thanks to the built-in screen flash function. Of course, it’s better if you take your selfies during the day. I watched 4 episodes of Marvel’s The Punisher on the Huawei Y7 Prime at its native 720p resolution. The videos play smoothly but with a slight stutter when resumed from a screen off state.

The audio from the loudspeaker could use an increase in volume but it remains clear at 100% volume. Listening to music is more enjoyable using the included earphones. It’s pretty good in quality with a single button and a microphone but it’s not the in-ear type which I’m more used to.

The Huawei Y7 Prime is a dual SIM smartphone. Both SIMs can connect to 4G LTE networks but not at the same time.

Wi-Fi, Bluetooth and hotspot functions work well. Meanwhile, GPS can get a lock on the phone’s location swiftly even inside our house.

However, the device lacks a gyroscope which is essential for immersive AR and VR applications. Its sensors include an accelerometer, ambient light sensor, proximity sensor, orientation sensor, magnetometer and of course, a fast and reliable fingerprint sensor. Battery life is where the Huawei Y7 Prime shines the most. On minimal use, its 4000mAh battery lasts for two days! It can even be extended further if the various battery saving features are turned on.

However, a straight session of playing games with the device can only last for 5-6 hours before needing a re-charge. Heavy usage will also shorten the battery life to a day but almost always with spare, rarely will it be fully depleted.

Charging the phone requires a bit of patience though. It takes around two hours and forty minutes to reach 100% despite the use of the included 5V/2A charger. That’s understandable given the high battery capacity. 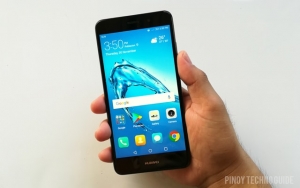