The Huawei Y5 2017 aims to be a gaming smartphone for the budget constrained. It even throws in a few extras and a long lasting battery.

It’s surprisingly capable of running the most common Android game titles at mid to low graphics. However, its front camera produces selfies with a lot of artifacts. Its textured back cover provides a good grip.

The Huawei Y5 2017 has a textured back cover and chrome lining all around it. The camera at the back also has a chrome trim. This design is polarizing but it’s growing on me.

Its volume and power buttons are on the right side, speaker and microUSB port at the bottom, Easy Key button on the left and audio jack on top. On screen buttons are used with the Huawei logo residing on the chin. An LED notification light is also found on the top left corner.

The EasyKey button is a nice and useful extra feature. It can be set to take pictures, turn on the flashlight function or open any app directly even when the screen is off! Gaming on the Huawei Y5 2017 smartphone.

Its MediaTek MT6737T chipset and 2GB of RAM provide the Huawei Y5 2017 with the processing power for games. NBA 2K16, Asphalt 8 and Mobile Legends on medium graphics are all playable with minor hiccups only.

However, the device shows lags and stutters when a lot of apps are running on the background. Recent apps should be cleared periodically for a smoother performance.

Bechmark scores for the Huawei Y5 2017 are as follows:

For photography, the Huawei Y5 2017 has an 8 Megapixel rear camera with an LED flash and f/2.0 aperture. This can produce decent pictures in good lighting but tends to over expose the highlights. Thankfully, the HDR mode fixes this problem albeit with a longer shutter lag. Meanwhile, the 5 Megapixel front camera may disappoint a lot of users. I had to exert effort in order to take a decent selfie. You’ll have to be aware of the direction of the light and never shoot against it. Even then, photos have a lot of artifacts. Its front LED flash can help but not by much. The Huawei Y5 2017 flaunts a clear and sharp 5 inch HD display with a maximum brightness of 470 nits. That’s a bit lower than the 510 nits of the iPhone 5s. Hence, legibility under direct sunlight is limited. Screenshots of the user interface.

It runs on EMUI software on top of Android 6.0 Marshmallow. Icons are pleasing to the eyes and the user interface is nicely arranged for ease of use.

It can also play 1080p videos smoothly and audio quality is slightly better than what you’d expect for a budget smartphone. The Huawei Y5 2017 is a dual SIM smartphone with 4G LTE connectivity. I’ve been using it as a Wi-Fi hotspot and it can provide fast mobile data connection with no drops.

It also has Bluetooth 4.0, GPS and FM Radio but no USB OTG. It has a removable back cover but embedded battery.

Battery life is always the strong suit of Huawei smartphones and the Huawei Y5 2017 is no different. Its 3000mAh battery can easily last more than a day on minimal use and a full working day on casual usage.

Binge gaming doesn’t require recharging for up to 6 hours! However, the slight heating might be uncomfortable. Give it a break every hour, will you? 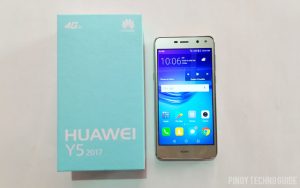 The Huawei Y5 2017 is a good gaming smartphone for the budget constrained but its front camera can be disappointing.