BY Daniel Gubalane ON Apr 21, 2018
In-depth review of the Huawei P20 Lite smartphone.

The Huawei P20 Lite fits all three criteria but it also joins the multitude of phones flaunting a notched display. Does it still look good with the screen cutout? This is our in-depth review of the Huawei P20 Lite! The important ports are at the bottom of the device.

Just like the more expensive Huawei P20 and Huawei P20 Pro, the Huawei P20 Lite has glass on the front and at the back with a metal frame in between.

The design is quite stunning especially when sheens appear as light hits the ‘glitter cover film’ underneath the glass back. It feels nothing short of premium when held as well as when your friends see it. It also feels compact and one hand usage is comfortable.

Perhaps the only complaint one can come up with is the slight protrusion of the rear camera module. Of course, smudges are also bound to happen just like other glass clad phones. A simple wipe can make it pristine once again. A closer look at the notch…

Bezels on the sides and at the top are all narrow with the one at the bottom taking almost the same height as the notch. The bottom bezel has the Huawei logo while the notch houses the front camera, receiver and sensors. A notification LED light is also tucked almost at the edge of the top bezel.

Meanwhile, the screen itself is bright and responsive. It supports up to 10 touch points at the same time while the pixel density is 432 pixels per inch. Hence, texts and graphics look sharp.

It’s a 5.84-inch LTPS display with FHD+ resolution and a 19:9 aspect ratio. The edges are slightly curved while all four corners are rounded. This makes the device look modern and polished.

The notch is here to stay but Huawei managed to make it less distracting and the device still looks good since the screen occupies almost the entire front panel. A Kirin 659 chipset is at the heart of the Huawei P20 Lite. It’s the company’s own chip which also powers the very successful Huawei Nova 2i.

It’s composed of a 2.36GHz octa core CPU, Mali-T830 graphics processor and 4GB of RAM. This combination yields the following scores in some of the most popular benchmarking apps:

In terms of actual usage performance, the experience is generally smooth. Apps open quickly, swiping is responsive and scrolling down feeds and websites is lag free.

Heavy usage can still choke the device especially when a lot of apps are running in the background and several games are launched (this happens when reviewers are testing a device). A quick clearing of the recent apps will solve the issue and Huawei’s software will also remind you when an app is consuming power in the background.

When it comes to gaming performance, the Huawei P20 Lite is decent. That can’t be said with all mid-range smartphones. Casual games are of course smooth and heavier ones such as Tekken, Mobile Legends and Pokemon Go are likewise smooth even in high graphics quality.

Resource intensive games such as Rules of Survival and Asphalt 8 also run smoothly in the highest graphics setting. However, there is a heating issue when playing on a night map in ROS where the screen’s brightness needs to be at the highest.

Aside from that, gaming is enjoyable with the Huawei P20 Lite. There’s also a Game Suite app that makes games run even smoother or save power depending on your choice. It can even prevent notifications from disturbing the user while playing a game. The Huawei P20 Lite comes with Android 8.0 Oreo operating system out of the box. Just like other Huawei smartphones, this is overlaid with the company’s own EMUI 8.0 skin.

The software looks neat and clean while the transitions and animations appear fluid. It’s packed with several useful additional features and optimizations including a theme gallery, storage cleaner, the aforementioned Game Suite and more.

Some apps are pre-installed on the device. These include Facebook, Instagram, Netflix, Booking.com and a few Gameloft games. All of these can be uninstalled though.

Huawei’s own app store is also pre-loaded on the device. It ties up with Huawei’s cloud services that includes backup for the device. Just like the Huawei P20, the Huawei P20 Lite also has dual cameras at the back with 16 and 2 Megapixels in resolution. Camera technologies including phase detection autofocus and AR stickers are present too.

Focusing is quick and taking pictures successively doesn’t slow down the camera noticeably. The camera interface is also neat and organized including the different modes that can be accessed by swiping from the left. Pictures taken using the rear cameras look good with vivid colors, on point brightness and decent dynamic range. Some photos appear too dark while being previewed but the final picture usually turn out surprisingly good.

The bokeh effect rendered by the secondary camera is decent too. It still has a hard time when it comes to difficult subjects such as individual hair strands but when used with nearly solid subjects, the effect can add character to your pictures. Let’s now take a look at the selfie camera of the Huawei P20 Lite. It’s equipped with a single 16 Megapixel front camera. Selfies look good with just the right color balance, brightness and sharpness as long as there’s ample lighting. AR stickers can also be automatically added to pictures for more fun with friends.

There’s no dedicated front LED flash but the screen can take this function and provide the needed lighting in low light situations.

All in all, the Huawei P20 Lite is a decent smartphone for taking pictures whether using the dual rear cameras or its front camera for selfies.

The Huawei P20 Lite is a dual SIM smartphone with 4G LTE connectivity. When in an area with decent signal, the device can provide a speedy mobile internet connection.

It also has hassle free Wi-Fi, Bluetooth and GPS for navigation apps. There’s even NFC for wireless payment services.

Meanwhile, its built in storage is 64GB. An additional 256GB can be added via the dedicated microSD card slot. Thumb drives can also be connected through the phone’s USB Type-C port for file access.

The Huawei P20 Lite has all the essential sensors in a smartphone – proximity sensor, orientation sensor and gyroscope for AR and VR apps.

It uses a rear mounted fingerprint sensor for secure unlocking and Face Recognition is present for additional unlocking option. Both biometric unlocking methods are quick and reliable although Huawei warns about the latter’s speed in low light environments. I’m usually impressed by the battery life of Huawei smartphones. However, I feel like the Huawei P20 Lite is just average by comparison to the Nova 2i.

It’s equipped with a 3000mAh battery and usually lasts the entire day on a single charge with casual usage. However, it only scored 6 hours and 47 minutes on PCMark’s battery test.

On the bright side, charging time is shorter than its competitors at 1 hour and 50 minutes only! This is the result of switching to a USB Type-C port that supports the company’s 9V/2A fast charging technology. The Huawei P20 Lite smartphone and its simple white box.

The Huawei P20 Lite is one of the best smartphones for ₱15,990.00 in the Philippines. It has a gorgeous design, decent performance, capable set of cameras and quick battery charging.

Just take note that it has a notched display like the iPhone X. It’s not as that distracting though and most smartphones in this price range has also adopted this design to make the screen occupy almost the entire front panel. 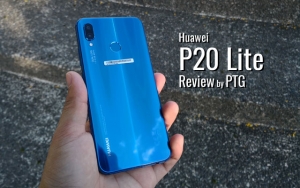 It has a gorgeous design, decent performance and capable cameras but with a notched display.