BY Daniel Gubalane ON Jul 27, 2017
The Doogee Mix smartphone in the flesh!

As the newest entrant to the already crowded Philippine smartphone market, Doogee had to offer something different. Their answer: the bezel-less Doogee Mix!

It largely delivers on its promises and adds some nice surprises. It’s not perfect though. There’s room for improvement both in the software and hardware aspects of the device.

There are no earphones in the package. Backside of the Doogee Mix.

Of course, the first thing I noticed with the Doogee Mix is its screen. It occupies almost the entire front panel of the device.

The most amazing part is the top side that leaves just a small space for the earpiece and sensors then the front camera is re-positioned to the bottom right corner. It looks futuristic!

The device has a comfortable heft to it. Its sides are metallic while the back side is glass. Yup, it’s a fingerprint magnet. Everyone notices that top bezel!

The Doogee Mix has a 5.5-inch HD display that claims to be bezel-less. It has minimal bezels but not bezel-less per se.

I measured the bezels using a school ruler and here are my measurements: 3.5mm on the sides, 4.5mm on top and 16mm at the bottom. This is because the metallic sides bulge outward significantly increasing the actual bezels.

The screen is bright enough for most of the day except when under intense sunlight. It also supports up to 10 simultaneous touch points.

It’s just a 720p display. That becomes apparent when watching videos with less than 720p resolution. Screenshots of the Doogee Mix. With its MediaTek Helio P25 and 6GB of RAM. I expected the Doogee Mix to have great performance. This is true with how fast I can switch from one app to another. It also has no problem running casual games.

It has slight hiccups when it comes to games with heavier graphics though. For example, Asphalt Nitro isn’t as smooth as I like it to be. It’s playable but not as enjoyable. The Doogee Mix is equipped with dual rear cameras composed of a 13.0 Megapixel main sensor and an 8.0 Megapixel secondary sensor. Hence, it has bokeh effects and 2x optical zoom.

Its camera user interface is also clean and intuitive. Bokeh effects can be achieved by choosing the Blur mode while a zoom button is at the center.

Here are some sample photos shot using the rear camera of the Doogee Mix:

An 5.0 Megapixel front camera is unusually placed at the bottom right corner of the Doogee Mix. When taking a selfie, the device tells the user to turn it upside down. It’s jarring at first but becomes second nature after days of use.

While the device can shoot and play 2k videos without any hiccups using the default video player, its sound quality isn’t that great. You’ll have to use a separate headset to enjoy YouTube and movies.

Even the earpiece needs more volume. I can hardly hear the other line while answering a call in a slightly noisy street.

The Doogee Mix has 4G LTE connectivity that works. However, there’s no option to set the network to 4G only, it always automatically chooses the best signal.

Browsing the web via Wi-Fi is smooth and transferring files using Bluetooth is likewise a breeze. It takes a few seconds though to get a GPS lock but that’s normal.

It also has an additional connectivity feature called HotKnot. With its 3380mAh battery, the Doogee Mix has no problem lasting more than a day on a single charge with moderate use. It scored almost 11 hours on PC Mark’s battery life test!

It also has fast charging capability. It took one hour and 50 minutes to completely re-charge from 0 to 100 percent while turned off using the bundled charger.

The home button of the Doogee Mix has an embedded fingerprint sensor. It can save several fingerprints and read fingerprint inputs quickly.

Accuracy is alright but you’ll have to properly follow the instructions when saving your fingerprint. Otherwise, it will reject your attempts to unlock the device. If you are looking for a smartphone with a distinctive look and superb multi-tasking capability, the Doogee Mix is already a great deal for ₱12,995.00. Its 4GB variant is even cheaper.

Remember that it’s the first version of the company’s ‘bezel-less’ smartphone. Hence, there are a few things that they can improve in its next iteration. One is to increase the screen resolution and another is to use a better chipset for gaming. 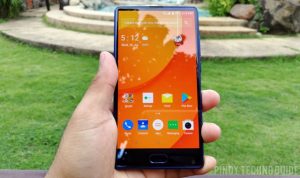 It has minimal bezels but not ‘bezel-less’ per se.