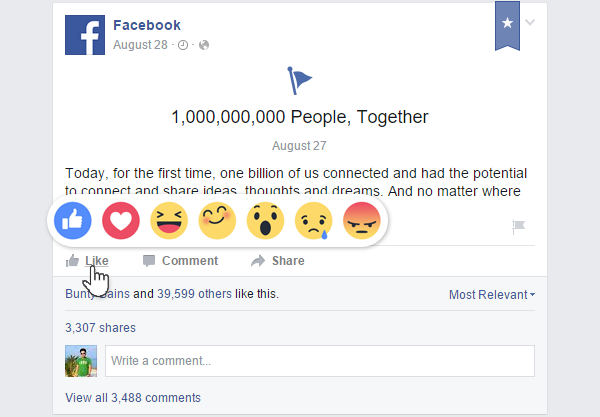 Have you seen a very sad post from your Facebook friend lately and wanted to express empathy by having a Dislike button?

Facebook’s solution to that is giving users seven emotional responses to choose from – the usual Like or the new Angry, Sad, Wow, Yay, Haha and Love. The company calls these ‘Reactions’.

On the Facebook website, the Reactions will pop up when the user hovers over the Like button. Expect a lot of Loves, Hahas and Wows for your status updates soon.

The official Facebook apps for Android and iOs are also getting the new feature. Users simply need to tap the Like button and the app will reveal the Reactions.

Ireland and Spain are the first countries to experience Facebook Reactions. If it proves successful, the rest of the world will follow.

It’s interesting to note that even the local news website Rappler has been using ‘Emotional Responses’ for some time now. Giving users the ability to express their emotions properly must be really effective.