The JBL Go is a portable Bluetooth speaker that claims to have a big sound for a compact size.

I won one in an online contest by Lazada Philippines. I’ve been using it for over a month now and it always amazes me how such a small speaker can sound so good.

This is my review of the JBL Go. Let’s check its specs first: The JBL Go comes in several colors including black, blue, gray, orange, pink, red, teal and yellow. I have the orange one and it’s definitely eye catchy.

It’s small and light enough to fit inside a pocket. Then there’s also a loop on its left side for a lanyard so you can carry it comfortably while walking along the beach.

The controls on the top side of the speaker are slightly raised so you can press them without looking. However, it has no water resistance as evidenced by an unprotected microUSB port.

While some people may not like the boxy design, it’s actually useful. With this shape, it can be properly backed-up into a corner or wall to amplify its sound output.


Calls with the JBL Go The JBL Go has a built-in microphone on its right side. When your phone is connected via Bluetooth, you can listen and speak directly to it when someone calls. A button on the JBL Go can even be used to end the call.

It’s more convenient than picking up your smartphone as long as you don’t care if another person hears your conversation. The JBL Go has a 600mAh Li-ion battery which is built-in. There’s no way for the user to remove or replace it.

JBL claims that the JBL Go can last a little more than 5 hours on a single charge. That’s an understatement since I’ve made it last up to 9 hours on 50-60% volume.

On the other hand, re-charging it takes around one hour and a half. I’ve used a charger from Xiaomi since the JBL Go only comes with a microUSB cord. JBL is one of the best brands when it comes to portable Bluetooth speakers. They’ve released another good product with the JBL Go.

What’s even better is its price that has now gone down to less than ₱1000 in several online shops such as Lazada Philippines. 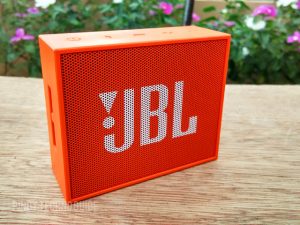 My personal review of the JBL Go portable Bluetooth speaker that I’ve been using for over one month now.