Three features made me very excited for the Huawei Mate 10: the built-in Artificial Intelligence chip, its dual Leica camera and a near perfect traditional smartphone design.

A month of using the device was a great experience. Hence, I highly recommend this as a more affordable alternative to the flagship smartphones of Samsung, LG and even Apple.

What I meant with traditional design is a 16:9 aspect ratio display. It’s near perfect because the side bezels are barely 2mm, there’s no cutout on the display and the 3.5mm audio jack is present! Glass back of the Huawei Mate 10. Notice the strikign design of the camera setup.

However, I’m not yet a total fan of using glass for the body of smartphones. It looks classy but the smudges are a pain to clean every now and then.

There’s also a concern about the durability of glass. Thankfully, the Huawei Mate 10 comes with tough Gorilla Glass 5 for both the front and back panels. It even comes with a free soft case for extra protection and improved grip. I tend to use the device without the case though. It gives off a premium vibe and the design on the back with the dual camera and band of fine lines make it stand out among other flagship smartphones.

One concern with near bezel-less displays is accidental touches along the edges. That never happened with the Huawei Mate 10. It’s smooth and very responsive to touches. In terms of sheer processing power, the Huawei Mate 10 performs like how a 2017 flagship smartphone should be. It’s powered by a HiSilicon Kirin 970 chipset with a 2.36GHz octa core CPU, Mali-G72 graphics processor and 4GB of RAM.

This chipset has a built-in NPU or Neural Processing Unit, Huawei’s term for a dedicated processor for Artificial Intelligence applications. It means the device can perform AI functions offline and within the device making it more secure and fast.

In practice, the AI capabilities of the Huawei Mate 10 is still limited since it’s the first iteration and app developers are yet to catch up. It’s applied in the camera and power management of the device. We’ll come back to this later.

Meanwhile, it scored 9667 points on Geekbench which is a bit higher than the Samsung Galaxy Note 8. However, it only scored 172000 points on Antutu while the Note 8 comes in at 179000 points.

This processing power shows when I play games. Asphalt Airborne and Mobile Legends run smoothly even at maximum graphics quality. The Huawei Mate 10 is an excellent camera phone! I used it during our tour in the beautiful island of Bohol and the pictures are high quality and gorgeous.

As previously mentioned, the camera is infused with AI technology courtesy of the new chipset. It can automatically recognize the scene and apply the appropriate enhancements. It works great on people, flowers and food but landscapes can use more color saturation. Huawei still partnered with German photography powerhouse Leica for the camera of the Huawei Mate 10. The dual camera system at the back comes with the new Leica SUMMILUX-H lenses. One is a 20 Megapixel monochrome sensor while the other is a 12 Megapixel RGB image sensor.

While some might be disappointed with the lack of a telephoto lens, this monochrome + color image sensor technique proves to be a great strategy. The device also has an 8 Megapixel front camera. This might sound less than what selfie focused smartphones offer but it always result in good quality selfies. Even those taken in pitch black situations are Instagram-worthy thanks to its screen flash function. The Huawei Mate 10 is one of the first smartphones to come with Android Oreo out of the box. It’s also skinned with the company’s new EMUI 8.0 software that adds several features and makes it more user friendly.

Icons look more professional with this version of EMUI and animations are smooth. If you prefer to have an app drawer, it can be enabled in the settings. I stayed with the default home screen style though.

It also comes with a dedicated phone management app for clearing junk files, eye strain protection and sharing platform Huawei Share among others.

It’s a great experience consuming multimedia content on the Huawei Mate 10. Most videos fill the entire screen and the audio quality is superb. There’s a high quality loud speaker aided by the earpiece to produce stereo audio.

I’m not happy with the free earphones though. Sound quality is just average with slightly annoying highs. Hence, I prefer listening through the loudspeaker whenever possible and use another set of earphones otherwise. The Huawei Mate 10 supports 4G connectivity on both SIMs at the same time! Signal reception is also very good for both calls and data connection.

However, there’s an option that you might want to disable in the settings – Internet connection during calls. It automatically enables data connection in the other SIM when one is receiving a call.

Wi-Fi, Bluetooth and NFC all work well. There’s also an Infrared blaster that turns the phone into a universal remote for your appliances. I found the Huawei Share function as a very convenient way of sending files between Huawei phones too.

I would have loved to try the EasyProjection feature of the device. It turns the Huawei Mate 10 to a desktop computer when connected to a larger display but I haven’t found a compatible Display Port cable yet. I might publish another article about it soon.

Unlike the Huawei Mate 10 Pro, the Mate 10 has a front mounted fingerprint sensor underneath its home button. It’s fast and responsive and can even function as a replacement for the onscreen navigation buttons.

It also comes with a gyroscope for AR and VR applications; barometer for elevation and pressure reporting; and the rest of typical smartphone sensors. Different battery life estimates based on the power saving mode.

Battery Life is one feature that Huawei smartphones has always aced. The Huawei Mate 10 comes with a 4000mAh battery that can easily last a whole day or more depending on the usage and power settings.

When the screen resolution is maxed out and all apps launches are managed automatically, the battery can only last around 15 to 20 hours. However, if Smart Resolution is turned on and most app launches are switched to manual control, battery life can be as long as a day and a half!

Power Saving mode also extends the battery life further while the Ultra power saving mode is just awesome. However, the latter sacrifices the smartness of the device and turns it to a basic phone for texting and calling. Thankfully, the Camera can still be enabled in this mode.

Charging the Huawei Mate 10 is just around an hour and a half. That’s the result of the Huawei SuperCharge technology. This is only supported by the original charger though so keep it around. 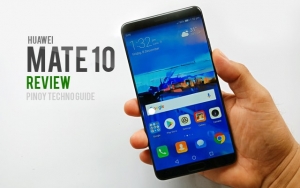 The Huawei Mate 10 is a more affordable alternative to other flagship phones with similar and even better features.