The realme X3 SuperZoom is realme’s first flagship smartphone in the Philippines. Hence, I expected it to have a flawless gaming performance in gaming tests.

It’s powered by a Qualcomm Snapdragon 855+ chipset and 12GB of RAM with a 120Hz screen refresh rate! As usual, I played some of the most popular mobile games and measured the average frame rate using GameBench Pro. 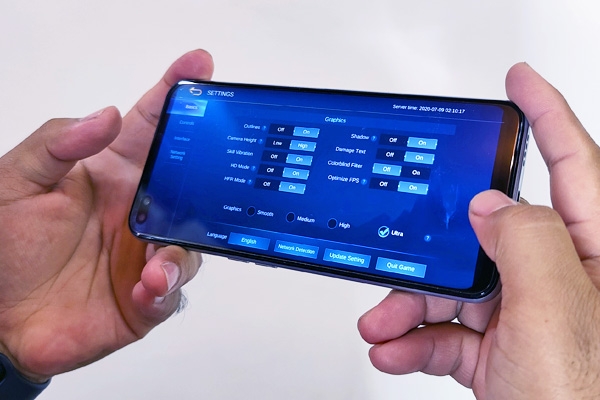 Graphics settings of Mobile Legends on the realme X3 SuperZoom.

Out of the box, Mobile Legends is set to ULTRA graphics quality on the realme X3 SuperZoom. I also turned on HFR mode, shadows, and character outlines for the test.

After a single Classic match, GameBench Pro reported a perfect average frame rate of 60 FPS. The game felt very smooth and lag-free even during clashes with enemies.

Mobile Legends only supports a maximum frame rate of 60 FPS as of this writing. However, the realme X3 SuperZoom can support up to 120 FPS since that’s the refresh rate of its display.

NBA 2K20 is one of the games that support high refresh rates. I’ve seen it run at 90 FPS during my realme 6 Pro gaming review.

I did not change any of the default graphics options of the game during the test. Most of the graphics elements were set to HIGH quality except for cloth simulation which was turned off.

The average frame rate as reported by GameBench Pro is 89 FPS. It’s almost perfect for the game’s maximum supported frame rate of 90 FPS but there were a few frame drops. Still, the game felt ultra-smooth with a higher than the normal frame rate. 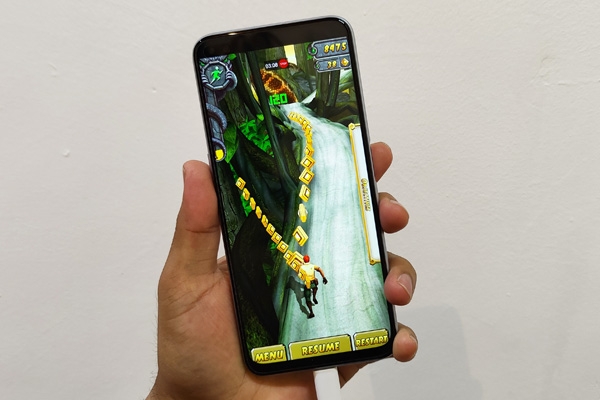 Temple Run 2 running at 120 FPS on the realme X3 SuperZoom.

I don’t usually include casual games like Temple Run 2 in these gaming reviews. However, there are only a handful of mobile games that support 120 FPS right now and this is one of them.

Of course, the game’s graphics quality was set to the highest during the test and the phone’s screen refresh rate is set to 120Hz.

The resulting average frame rate is 119 FPS! Based on GameBench Pro’s overlay FPS counter, the game runs at 120 FPS most of the time but drops to around 115 FPS in some scenarios.

The game felt truly ultra-smooth from the motion of the main character to the background animations. Personally, though, there’s only a small difference between 90 FPS vs 120 FPS.

Graphics settings of Call of Duty Mobile on the realme X3 SuperZoom.

Call of Duty Mobile supports up to VERY HIGH graphics quality and MAX frame rate preset on the realme X3 SuperZoom. These were the settings during my gaming test.

After a FRONTLINE match, the resulting average frame rate is 60 FPS with 100% stability. That means the game ran smoothly at a perfect frame rate even during clashes and complex scenes.

I would have liked to experience Call of Duty at higher refresh rates. However, the game’s mobile version only supports up to 60 FPS right now.

If there’s a game that can push a smartphone to its limits, it’s PUBG Mobile. I set the game’s graphics quality to HDR and enabled the EXTREME frame rate preset.

After 16 minutes of playing, GameBench Pro reported an average frame rate of 59 FPS. It mostly runs at a perfect 60 FPS but slightly drops during clashes.

The game feels smooth and the graphics look superb. However, the graphics quality should be adjusted to HD when playing competitively.

Here are the results of all the gaming tests I conducted on the realme X3 SuperZoom smartphone:

The realme X3 SuperZoom also features Liquid Cooling technology and it works. During my gaming tests, the highest temperature reported by GameBench is 38°C only. Other smartphones usually have temperatures above 40°C when playing games.

The realme X3 SuperZoom has flagship-level gaming performance and even reaches 90 FPS and 120 FPS in games that support high refresh rates.

It ran Mobile Legends and Call of Duty Mobile smoothly at perfect frame rates like these games were nothing. PUBG Mobile and NBA 2K20 pushed it to its limits but still managed to show an impressive performance.

The realme X3 SuperZoom might not have the latest Snapdragon 865 chipset. But, its Snapdragon 855+ still packs quite a punch in gaming. This should be in everyone’s list when shopping for a bang-for-the-buck gaming smartphone.