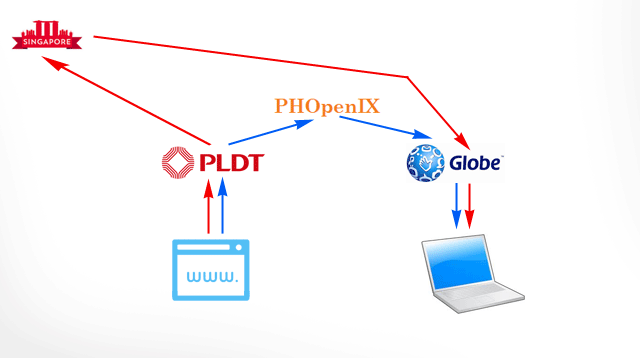 PLDT has finally agreed to join the Philippine Open Internet Exchange (PHOpenIX) after months of requests from the public and private sectors including its competitor, Globe Telecom.

This move will make browsing websites or playing online games that are hosted in the country considerably faster since the data doesn’t have to travel to Singapore or any other country.

Joining the PHOpenIX will create a direct link between different Internet Service Providers (ISP) in the country. This technology is called IP Peering and Globe Telecom, Sky Broadband, Bayan Telecommunications and several others are already members.

Aside from making local websites load faster, having PLDT connected with the PHOpenIX may encourage large international websites such as Google and Facebook to put up local caches here which will further increase their loading times.

It should also decrease the cost of internet connectivity since connecting to the PHOpenIX is free. Paying Internet Exchange centers in other countries is way more expensive. Don’t expect too much though.

The PHOpenIX was developed and maintained by the DOST’s Advanced Science and Technology Institute (DOST-ASTI). It has three data centers – one in Makati, another in Quezon and a third in Cebu.

However, the agreement will allow PLDT to operate the PHOpenIX together with the DOST-ASTI. Hopefully, that won’t have negative effects with its operation.

Senator Bam Aquino posted this news in his official Facebook page on September 5, 2015.

Update: This connection will only speed up government websites.