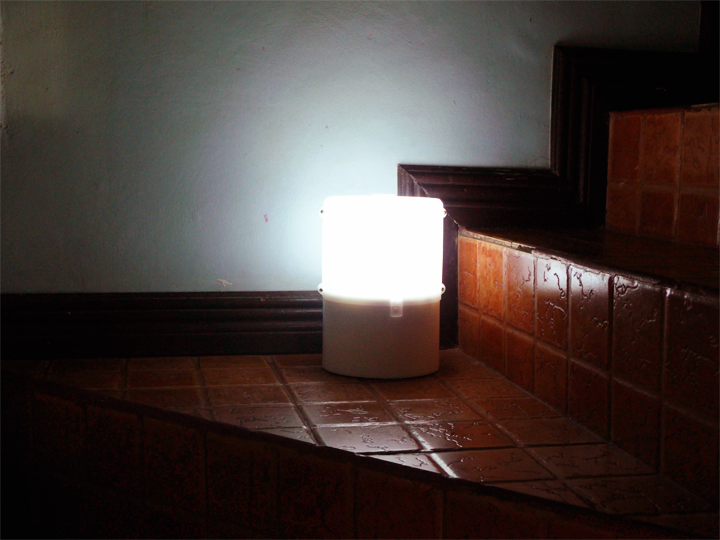 I clearly remember the darkness in the wake of super typhoon Yolanda. That’s why the salt powered lamp presented during a startup contest immediately caught my interest.

The lamp called SALt (Sustainable Alternative Lighting) is the idea of a startup from  Dela Salle University in Lipa City. It won Php500,000 of funding from Ideaspace and is now poised for a November 2014 launch.

The SALt lamp uses 1 teaspoon of salt dissolved in a cup of water to light up continuously for 8 hours.

It might not look too bright in the pictures but it is comparable to a 4W LED bulb. Find an ordinary LED flashlight – SALt is four times brighter than that!

For those who take their Physics seriously, the group used a Joule Theif to ramp up the voltage from the salt cells so that it can operate all the 12 LED’s inside the lamp at maximum capacity.

However, the lamp is a bit too bulky. A reduction is its size will surely give it an advantage over the more compact flashlights with 4W LED that are available for Php250.

The group also stated that a rod inside the SALt lamp must be replaced every 6 months. This is likely a Magnesium rod which isn’t something you can easily find.

Nevertheless, a similar lamp in Japan requires Magnesium rod replacement every 120 hours (5 days) of continuous use. The longer ‘rod’ life of the SALt lamp means that users can truly feel its reliance on table salt ‘only’ for power.

CEO Engr. Aisa Mijeno said that the concept for a salt powered lamp was formed during her stay with the Butbut tribe in Kalinga where kerosene lamps were the only sources of light during moonless nights.

A lot of mountainous villages in the country still don’t have electricity. This salt powered lamp will be of great use for our fellow Filipinos without the high cost of batteries or solar panels. The Hanunuo Mangyan tribe in Bulalacao, Oriental Mindoro will be one of the group’s beneficiaries.

The SALt lamp is also a great emergency light after a natural calamity. I wish I had one during that fateful night of November 8, 2013.