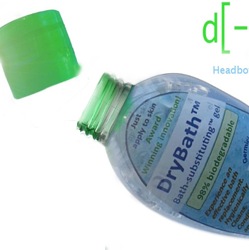 Ludwick Marishane invented the lotion called DryBathTM that allows to to clean your self by putting it on your skin. Because of his invention, he was the first sub-Saharan African to win the Global Student Entrepreneur Award.

Ludwick started all of this from his childhood dream of not having a bath. Just like you, I suppose. He then proceed to research the ingredients found on different skin products to find out a formula for a dry bath lotion.

It was in his high school days that he written the formula (a secret) for the drybath lotion.

When he was in college, he studied more about his drybath lotion and made a business plan. With his small allowance, he made prototypes and tested them on himself.

When he finally get it working, he did not take a bath anymore. That’s a joke. Seriously now, he was awarded as the Global Student Entrepreneur of the Year in 2011 and was invited for a talk at TED Talks. Watch the video below:

Ludwick Marisbane also highlighted in his talk at TED Talks that millions of people do not have enough access to water supplies. This causes many illnesses in people especially in Africa.